Bordeaux 2014: What next for en primeur?

The 2014 campaign has been neither a roaring success nor an unmitigated disaster but some merchants are now questioning their approach to future campaigns with one major merchant announcing a review.

The 2011 campaign was famously “messy, bloody and very difficult”, the 2012 was an “uphill struggle” and last year was a “disaster”.

With recent precedent setting the bar so low, success (however relative) was practically guaranteed and the wines were good too.

“I really love the wines,” declared Bordeaux Index’s Gary Boom, who added they, “reminded me of the ‘85s.”

Despite the hope that good wines and a good exchange rate would bring buyers – and perhaps even the Americans – back into the market for Bordeaux futures, there were also fears a great opportunity to reengage with consumers and do a lot of business would go begging.

As can be seen from the lead image, “price” was, once again, foremost in everyone’s minds before, during and now after the campaign. Max Lalondrelle of Berry Bros & Rudd warned in early April the campaign would flop if prices rose and the merchants penned an open letter to the Bordelais calling for prices to sink back to 2008 levels although it is unlikely any seriously thought this would happen.

Speaking to buyers and directors from Corney & Barrow, BBR, Fine & Rare, Farr Vintners, Bordeaux Index and Liv-ex, the overall impression with regards the progress of the campaign was mixed – optimism if not exactly crushed then certainly brought a little low.

According to Fine & Rare’s Joss Fowler, “over the course of the campaign we have seen glimpses of what it’s like in a big one. A price comes out, you weigh it up against quality, you get excited, you go out and sell it.”

Hargrove agreed somewhat and argued: “In some ways it’s positive, buyers this year are buying purely to drink.”

He also said that pace of releases had been good – the campaign began on 13 April with Doisy-Daene and finished (in effect) with Montrose on 2 June and despite sometimes feeling long-winded the 2010 campaign, it should be remembered, lasted four months.

With prices coming out after the scores from Neal Martin and with the overall lack of speculators he thought the campaign had “all been a bit more real.”

Very little has sold in any great quantity. Those merchants the drinks business spoke to usually said that wines with good prices worked, while “those that didn’t work, didn’t work at all,” according to Fowler, who said the campaign had been a, “bit stop-start.”

Wines that “worked” included the first growths, Rauzan-Ségla, Canon, Lynch Bages, Pichon Comtesse and Duhart Milon, and where they worked they worked well. Lalondrelle pointed to the 600 cases of Angludet BBR sold, while Georgina Crawley, associate director of business development at Goedhuis, told db they’d sold around 100 cases each of wines like Lynch Bages, Canon and Ducru-Beaucaillou.

“Clearly the public were not about to be enticed back into the market,” said Boom, while Lalondrelle said that en primeur has “failed to retain the attention of the consumers,” because it’s not being priced for them anymore and they are aware of this.

“Some price at a level which doesn’t work,” agreed Fowler, “I propose they aren’t interested in selling en primeur. I applaud châteaux that price their wine so it sells to the consumer because consuming is what wine is all about.”

Lalondrelle said before the campaign any wine released at a price not deemed reasonable would either not be offered or would be offered with the caveat that cheaper or similarly priced vintages were available. Pontet Canet and Montrose were among the wines to receive this treatment.

Nonetheless, Crawley stressed the need for merchants to be “positive” and get continue to get behind wines that made an effort to price sensibly and were well-made

“Speculation’s been taken out of the market and it’s about pure love of these wines. Consumers still want these wines in their cellar,” she said. 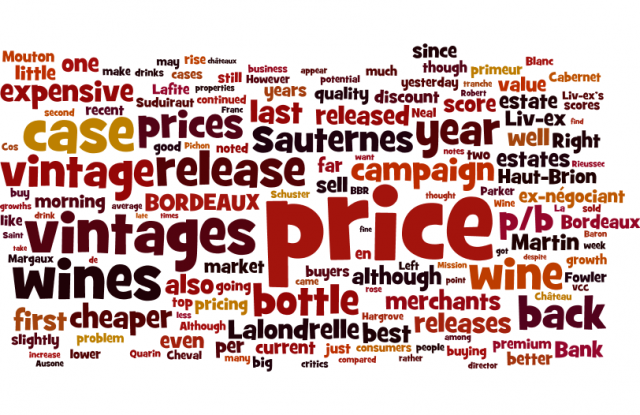 At the end of last year db asked if the rapidly decreasing value of the euro versus the dollar (and the pound) would help bring US buyers back to the futures market in greater numbers.

In theory it was entirely possible although US merchants warned that buyers there wouldn’t be out to buy at any price, particularly as they had grown accustomed to feasting on cut price wines from 2009 and 2010 which they passed on buying en primeur in the first place.

After speaking to some of its US members, Anthony Maxwell, co-director at Liv-ex, told db the campaign had been “satisfactory” and broadly similar in character to the UK.

Demand centered on a dozen or so brands such as Lynch Bages, Mouton Rothschild and Cantemerle but it was certainly a “hand sell” type of campaign.

“The currency helped,” thought Maxwell, “if the differential was what it was a year ago it would have fallen on deaf ears.”

“It played a small part, no question,” Sean Bishop, CEO of JJ Buckley in California, told db but he argued that his customers knew this was a “better than average vintage” and “at the end of the day, the American consumer wanted to buy wines of quality and they haven’t been able to do that for a few years.”

The exchange rate helped but, “[they] would’ve bought regardless. Wouldn’t have gone wild but they wanted to buy.”

Either way, the US does not seem to have got involved in this campaign to the extent it could have done. 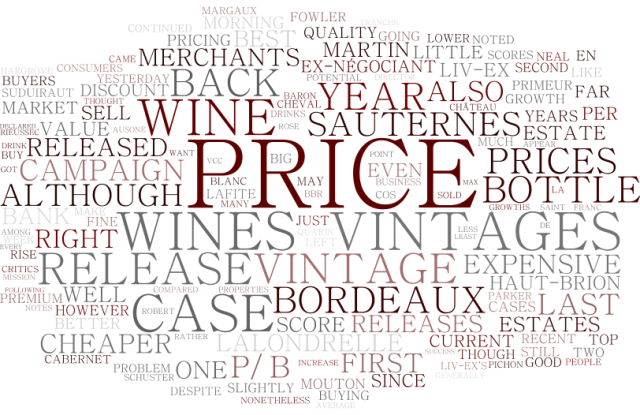 Overall Lalondrelle thought BBR had turned over 30% more than last year in value but may be as far as 40% behind even the 2012 campaign. Boom said he doubted BI had made more than £3.5 million this campaign.

What’s more, Lalondrelle said: “There’s no denying the extra percentage is to do with the quality of the vintage but also the exchange rate. If the sterling wasn’t as strong I doubt we would have made more than 2013 in terms of sales.”

Fowler warned, however, that a “rose-tinted” view of past campaigns may be distorting some views of this one.

He said: “En primeur campaigns in anything other than the great vintages are always a little bit like this and this has been one of the better ones. The 2011, 2012 and 2013 campaigns were all pretty dull. 2006 to 2008 were all pretty dull as well. People get all rose-tinted about 08 but no one wanted to buy them until Parker came out with his scores. The 2004 [campaign] was no fun at all at the time.”

Nonetheless, there’s no denying that recent campaigns would have worked vastly better if prices weren’t so high.

“The general reaction from the UK buying public is complete apathy towards en primeur in general at the moment because there’s no incentive to buy wines en primeur if they’re going to be available in three years’ time for the same price or less,” stressed Farr Vintners’ Tom Hudson. “There’s no future for an en primeur market with these kind of prices.

“The en primeur campaign takes up weeks, sometimes months of everyone’s time, I’m sure merchants will want to devote less and less time to this whole thing.” 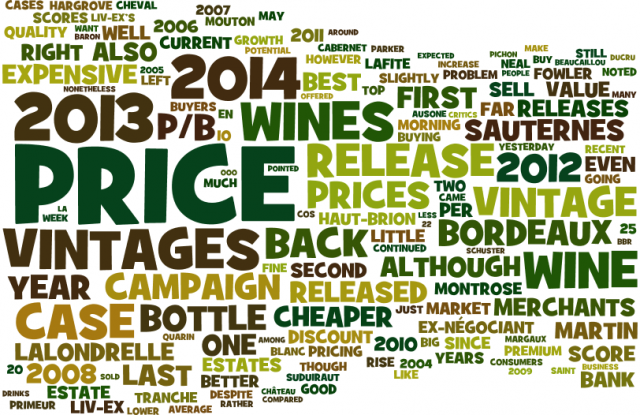 All anyone wanted as spring neared was a big, fat, juicy campaign. That didn’t happen and while previous and current commentary has focused on the strain these unsold wines are putting on the négociants, it is increasingly clear merchants are fed-up with the state of affairs as well and it looks likely that some merchants at least will be re-evaluating the resources they assign to en primeur campaigns in future.

Boom said that for all the effort his team put in to the campaign, it was becoming increasingly expensive to only sell a “paltry” amount of wine by the end of the campaign.

He added that if “nothing interesting” had come out by 10 am “we refocused on Burgundy or Champagne. Next year there will be less interest from the merchants. It takes 10 guys out of the room every year and if they’re armed with knowledge no one wants to know about, it’s not worth my time. If every month was en primeur month, I’d go out of business.”

Lalondrelle told db that BBR has 40 people “involved in marketing, sales and logistics of en primeur and when there are wines at the wrong price then we have a whole day of not making any money.”

He continued: “There is an argument we buy the wines we believe are good value and then offer them as a one off in July. We are the biggest en primeur player in the UK and if it doesn’t work for us I doubt it will work for others.”

It has often been pointed out that en primeur has had its wobbles down the decades but it’s hard to escape the feeling that the system really is dying by slow decrees.

Rage against the dying of the light, declares Crawley who, while acknowledging the need for margins maintains there’s still, “a decent amount of business to be done. This is where the market needs to go back to its roots…[and] merchants promote wines they believe in. We have to be seen to be making a stand for certain wines.”