Universally acknowledged as one of the best wines of the vintage, has Montrose gone too far with a 54% price hike? 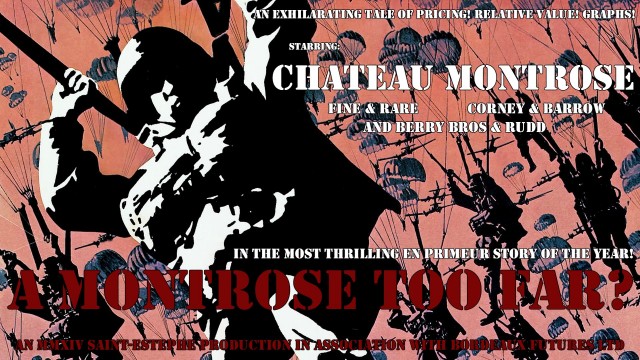 At £850 a case on average it’s certainly at a substantial premium to the majority of its back vintages from the last 10 years and almost as expensive as the current price of the 2005.

On the other hand, the wine is widely held to be one of the best wines of the whole vintage. Neal Martin gave it 95-97 points and after talking of its “enthralling sense of energy and precision”, noted:  “Dare I say, this is one grand vin that comes perilously close to matching the heights of the 2009 and 2010. This is a brilliant Montrose, one of the best you will find on the Left Bank this vintage.”

“That’s a big statement and I think I might agree with him,” said Fowler. As both he and Corney & Barrow’s Will Hargrove pointed out, there were “two ways” of looking at prices – one looking at its relative value compared to back vintages, the other on the sheer quality of the wine.

“It’s fantastic wine,” said Fowler. “Is it worth buying? If you’re a fan of Montrose and want one of the wines of the vintage then, yes. If you’re concerned about relative value then no. It’s an ambitious price but it depends on how much they want to sell of it.”

A lot of the pricing discussion this campaign has focused on the need for new releases to have a 25% discount on the current prices of vintages like 2008 and 2006 in order to sell.

Although this has evidently allowed some wines to do well, several merchants throughout the campaign have pointed out that some wines have found an eager audience despite a lesser or even non-existent discount to those years.

Montrose, with its seals of approval from all quarters, may prove one such example but Hargrove and Berry Bros & Rudd’s Max Lalondrelle – who both had “no problem” with the wine’s quality – were a little concerned the price might prove to be a rise too far.

Merchants responding to Liv-ex’s survey had hoped to see it come out at around €62 p/b and while Hargrove admitted they had all expected a price rise, he added that if the price started with a “6” he’d be happier, even a “7” but that at €88 it wasn’t “an engaging price. I don’t think we’ll sell very much of it.”

Likewise, Lalondrelle said he was, “slightly disappointed with the price.” he continued: “We are going to offer it but with a caveat that the 2005 is roughly the same price and that other wines are cheaper. The wine is good but in the context of this campaign we think it’s a bit too high.”

Hargrove added that if it had been on more on the level of fellow second growth Ducru Beaucaillou (released at €79.20 p/b) he would suggest Montrose but as it was it felt a little “out of kilter… – even if they have made a better wine.”

“If it fulfils all of its potential, then this is not a bad buy,” reiterated Fowler but as Lalondrelle said, “within the context of the value of Montrose as a brand in the market at the moment there’s no need to rush into it.”

The campaign is effectively over with Petrus and Le Pin two of the last to be offered.