Bacardi has partnered with the Lubee Bat Conservancy to create several bat habitats at its rum bottling facility in Florida. 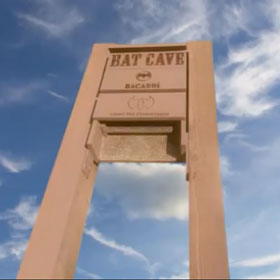 Three wooden bat caves have been installed at Bacardi’s plant in Jacksonville, capable of housing a total of 500 bats.

The caves stand 20 feet off the ground and bear the logos of both Bacardi and the conservancy. The goal is to preserve the various species of bats in the area and to provide crucial habitats for them, which extends to the surrounding wetlands, fields and forests.

Bacardi has a ‘wildlife team’ which consists of 11 employees who volunteer to manage 21 acres of wildlife habitat as part of the ‘Wildlife at Work’ programme. Several members of this team worked closely with the Lubee Bat Conservancy on this latest project and will help in the maintenance of the bat caves.

“Monitoring of the bat houses will be conducted in a responsible manner, so we do not disturb the bats as they take residence in the new shelters,” said Brian Pope, director of Lubee Bat Conservancy. “For this reason, we don’t have cameras inside the shelters. Acoustic surveys conducted in late spring recorded 716 identifiable calls revealing four bat species on the Bacardi property.”

As autumn draws in the company expects to see the number of bats, including Mexican free-tailed, Evening, Tricoloured and Eastern Red bats, increase.

“Conservation and sustainability have been a part of who Bacardi has been since the very beginning nearly 155 years ago. We’ve now come full-circle with these bat caves as we live out this legacy,” says Julio Torruella, global environment director for Bacardi.

“Bats are vital to the health of natural ecosystems and human economies, so preservation of their habitats makes great sense with regard to sustainability. “We work just as hard to find ways to preserve habitats and protect species as we do to reduce energy consumption and conduct business sustainably.”