Come Fry With Me 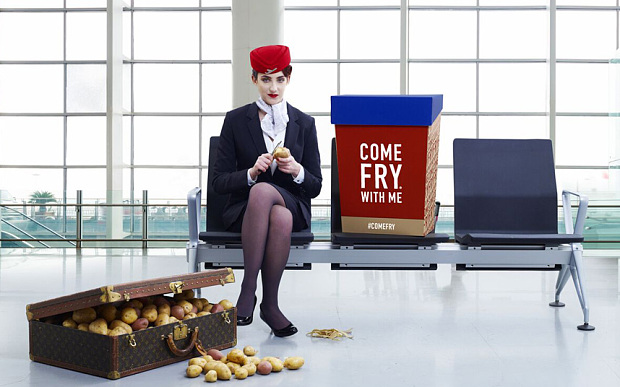 Highlighting the growing trend for single dish restaurants in London, a chip only venue, Come Fry With Me, is slated to open in Covent Garden this autumn. The aviation-themed Come Fry With Me is the brainchild of chip enthusiast Tiffany Plant and will have a mini-plane on its roof, while staff will be dressed as cabin crew and condiments will be pushed on trolleys up the aisle.

Among the riffs on chips on offer at Come Fry With Me will be truffle and Parmesan chips fried in duck fat; Marmite skinny fries; naked fries in Guinness batter and curry fries with mango chutney. For dessert guests can enjoy sweet potato fries with vanilla icing, chocolate or peanut butter dip. The fries, made with Maris Piper potatoes, can also come topped with steak and Stilton or chilli con carne with sour cream. 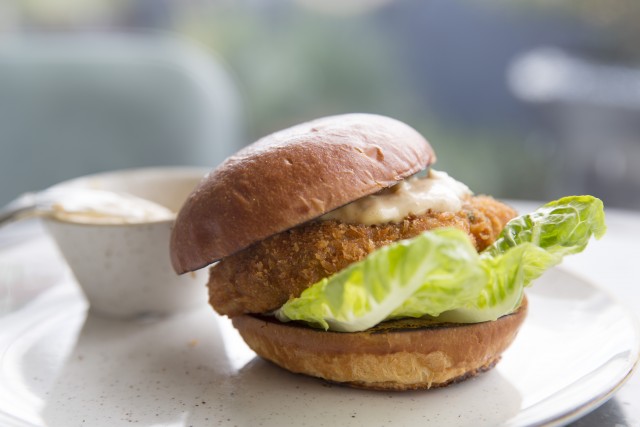 On the theme of chips, the capital gets two posh new chippies this month in the form of Vintage Salt in Islington and Hook in Brixton. Vintage Salt has quite sensibly changed its name from the less snappy “The Fish & Chip Shop” on the back of the success of its pop-up on the roof of Selfridges. In addition to sustainable haddock and cod with hand cut chips, diners can chow down on trout with charred asparagus, lemon and herbs, and a Cornish shrimp burger with spicy tartare sauce.

Across town at Hook, which recently opened at Pop Brixton, traditional fish ‘n’ chips is twisted on via tempura batter, Panko breadcrumbs and sauces like garlic truffle, lemon Cajun and basil chili. Chips meanwhile are seaweed salted. Those in the mood to go off-piste can try scallops in Panko with lemon sauce or a curious sounding sea spaghetti and samphire salad. 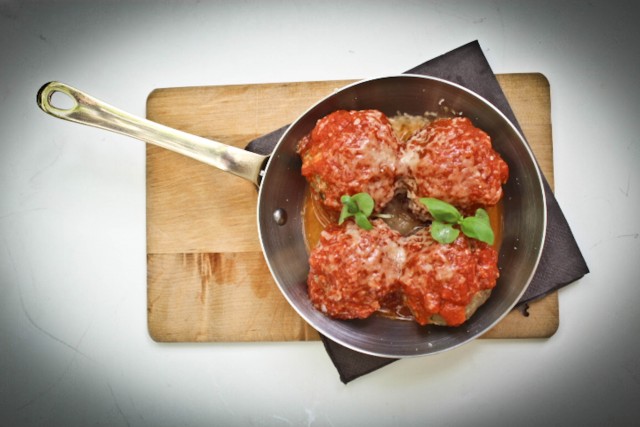 Flying the flag for single dish restaurants is Soho newcomer Balls & Company, which, as the name suggests, shines a light on the humble meatball. Run by Australian chef Bonny Porter, the Greek Street restaurant gives meatballs the gourmet treatment, with medium rare wagyu beef balls making an appearance on the menu.

Balls are served in fours and include pork, parmesan and pine nuts; chicken, thyme and lemon; salmon and dill; and quinoa, beetroot and feta for veggies served with a selection of sauces including tomato, béchamel, romesco and pesto. The spherical theme is carried over into the desserts via choux balls with Purbeck ice cream. 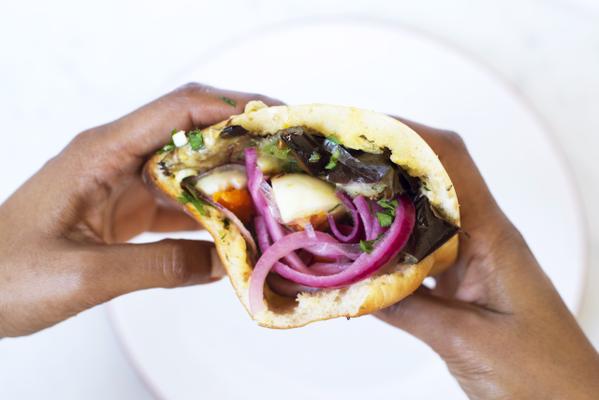 Having already brought you news of Bad Egg in Moorgate, which gives the humble egg in the limelight, two new egg-focused ventures have since hatched: The Good Egg in Stoke Newington and Egg Break in Notting Hill. The former started life as a pop-up but has since taken over a grade II listed site to serve dishes inspired by founder Joel Braham’s childhood travels.

A must try is the Good Egg Burger, an aged beef and bone marrow patty topped with pickled onion, Russian dressing and a runny egg in a challah roll. The Jerusalem breakfasts also sound mighty fine and include shakshuka with preserved lemon yoghurt, homemade bagels with smoked black cod and eggs Rothko. Over at Egg Break, owned by the Soho House group, you’ll find brisket and egg baps; avocado and eggs on toast and eggs with fried chicken. 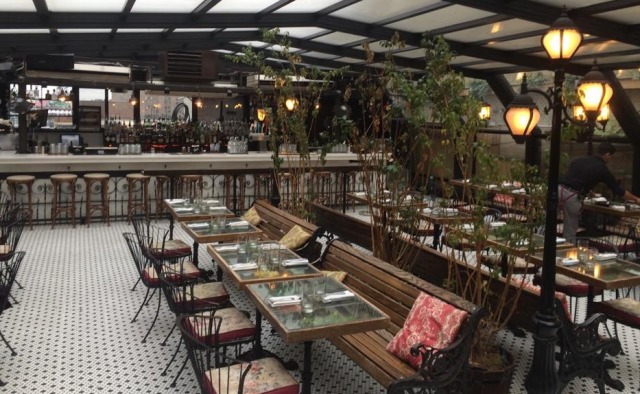 Don’t let the name confuse you – there are no rooms at Hotel Chantelle on Orchard Street. The New York export is named after a World War II safe house and its rooftop design is inspired by the NY original. Combining American and French fare, on the menu are comfort food dishes given a modern twist, like waffle-crusted fried chicken with maple syrup cotton candy, and a tuna tartare cigar served in a vintage ashtray.

Hells Kitchen trained head chef Seth Levine was keen to take his popular brand to London and is particularly hyped about the jazz brunches, which take place every weekend and feature live music performances, quirky cocktails and copious amounts of food. 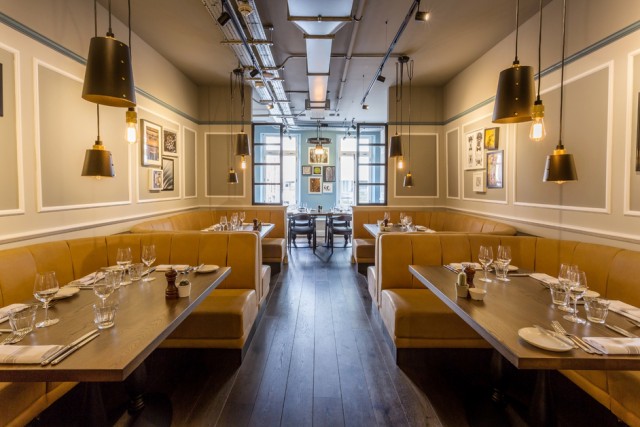 While also working at the Stand Dining Rooms in Charing Cross as chef director, Gordon Ramsay protégé Mark Sargeant has branched out with his first London venture, Morden & Lea in Soho, an all-day brasserie named after 17th century cartographers Robert Morden and Philip Lea, who were the first to map out the area of central London now known as Soho.

Head chef Daniel Merti has good pedigree, coming by way of The Savoy and Le Gavroche, so expect the likes of roast Goosnargh duck with garlic potatoes, roast peach, broccoli, almonds & chilli; grilled Cornish mullet with spelt, mussels & bok choy; and pressed strawberries and pistachio crumble. The site is split in two with a casual space downstairs and a more formal restaurant above. 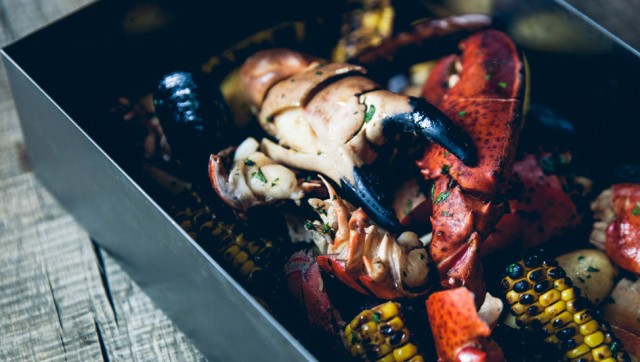 If 2014 was the year of the lobster in London, 2015 is set to be the year of the crab. Enter the Crab Tavern in Broadgate Circle, an all-day seafood restaurant with a New York feel. Going big on crustacea, house specials include sweet & savoury King crab brioche doughnuts, crab mash and “bucket boil” – a mix of crab claws, mussels, lobster, ratte potatoes, Merguez sausage and sweetcorn.

Those with a sweet tooth can devour a pecan, chilli & maple tart with lime Tequila sorbet or get acquainted with the Sundae selector. Boozy root beer floats, shakes and a series of twists on Long Island Iced Tea hold up the drinks end. 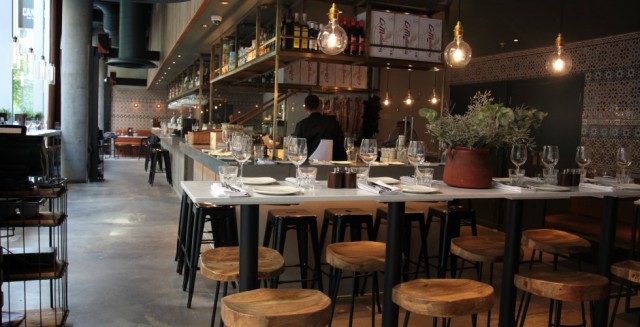 Expect to see the likes of pan-roasted octopus tentacle with purple potatoes, paprika and olive oil; black rice, cuttlefish, squid ink and alioli; and whole roasted Segovian suckling pig. Mr. Bigg is a diehard fan of Spanish wine, so you’ll find some of the country’s top drops on pour, from white Rioja Finca Allende 2010 to Pétalos Mencía by Descendientes de J. Palacios alongside oodles of Sherry and Cava. 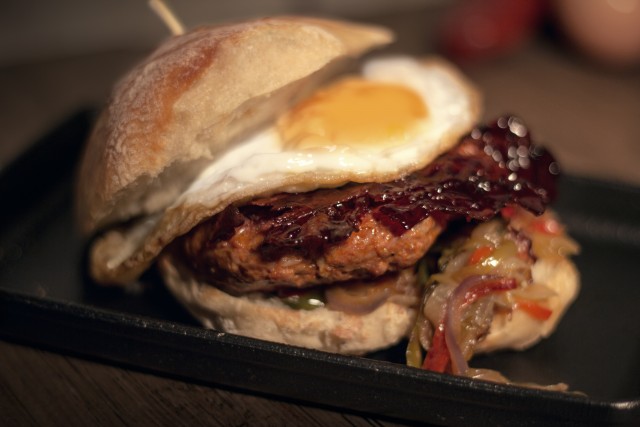 Another Spanish tapas bar to launch this month is Lobos in Borough Market. Meaning wolves in Spanish, the site, run by former Brindisa chef Roberto Castro, is unashamedly meaty in its approach. Iberico pork is the star of the show, with everything from pork shoulder, loin and fillet appearing on the menu.

Also in the line-up are milk-fed Castillan lamb, deep-fried marinated dogfish and beef from The Ginger Pig. Burger lovers should try the Lobos Bun, featuring a chorizo patty, candied bacon and fried onions topped with a fried egg, while sweet fiends need to get involved with the dulce de leche cheesecake. On the sipping front, the all-Spanish wine list was assembled by Peter McCombie MW. 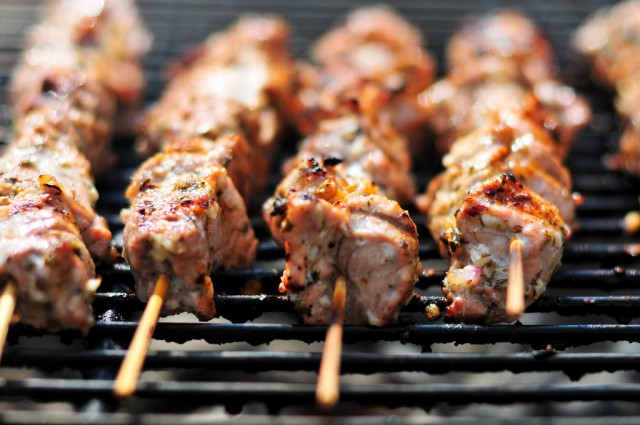 While the Greek economy may be in the doldrums, Greek cuisine is sizzling in the capital, with newbie Suvlaki in Soho aiming to add a street food twist to the melting pot. The Athenian grill offers light bites and a takeaway option and centres around the “suvlaki”, a meat skewer cooked on a charcoal grill and eaten straight up or in a wrap.

Hoping to change perceptions of Greek food in the UK, among the skewers on offer are pork, chicken, lamb and vegetables served on sticks or wrapped in pita. Meat is sourced from Smithfield market in addition to rather grand sounding wild boar sausages from a farm near Mount Olympus. But man cannot live on meat alone, so there are Greek wines and even a few brews from the country to enjoy with the skewers.