Martin is one of the most famous Catholic saints, venerated around the world and considered a “spiritual bridge” across Europe because of his association with France and Hungary. 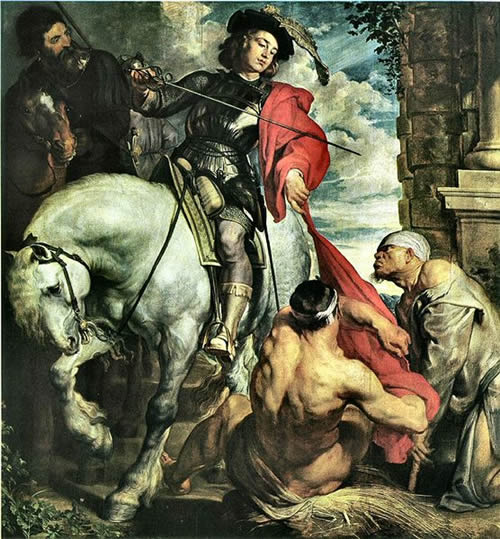 Born a pagan he served as a soldier in the Roman cavalry in Gaul, just as his father had served in Hungary (then known as Pannonia) where Martin had been born.

While stationed in Amiens one winter he famously encountered a beggar and, having nothing to give him on such a cold night but the clothes on his back, cut his heavy cloak in two giving half to the beggar (see the above painting by Van Dyck) .

That night Jesus appeared in a vision wearing the cloak. Martin was released from the army in Worms and after many years of wandering became bishop of Tours in 372.

There is one story that relates how Martin, while travelling through the Loire on his donkey, stopped at a monastery one evening.

The brothers there had vines and offered the bishop their wine and a bed for the night. The poor donkey was left tied up in the vineyards and, unfed, fell to munching on the remaining leaves and sarments.

The following morning Martin had to apologise to the monks for the apparent destruction his beast of burden had inflicted on some of the vines.

The following spring, however, to the delight of the monastic winemakers the eaten buds burst forth with renewed vigour and the donkey had invented pruning.

He died an old man – about 80 – and was one of the first non-martyrs to be made a saint.

Martin obviously has a particular place in the hearts of Loire winemakers due to his association with the region and also Hungary where he was born.

However, his influence extends far and wide – the list of his patronages is too numerous to list here but includes France, Buenos Aires, Burgenland, soldiers, beggars and the Swiss Guards – even as far as the City of London, where, as well as St-Martin-in-the-Fields which is dedicated to him, he is the patron saint of the Vintners Livery Company.

This excerpt was originally published as part of the “Wine Saints” article on the drinks business and with thanks to the late John Radford for the addition of the story of the “pruning donkey”.