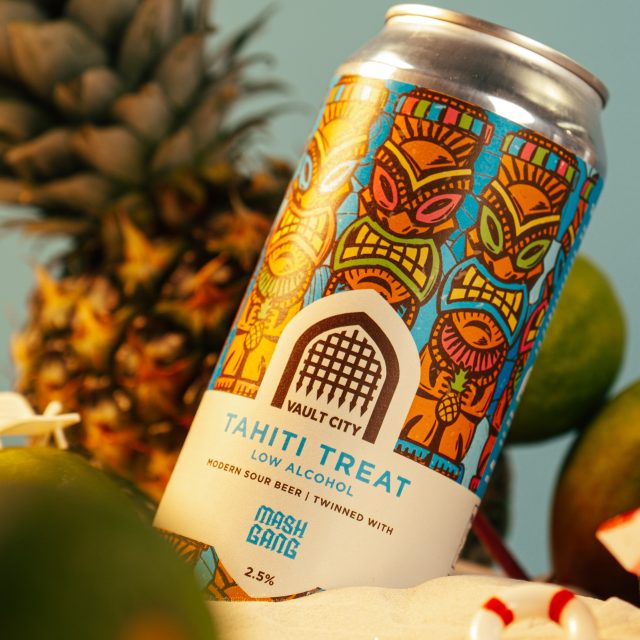 The new 2.5% ABV sour beer, named Tahiti Treat, is a collaboration with ‘low & no’ experts Mash Gang and has been flavoured with mango, pineapple, lime, and rum.

Speaking to the drinks business, Vault City Brewing co-founder Steven Smith Hay said: “This International Sour Beer Day we’re launching our first ever low alcohol Vault City sour beer. We’re known for high ABV, or high ‘vault-age’ beers as we call them, and these are typically enjoyed as a treat alongside more traditional beer styles. However, what we’re seeing more and more is a demand for sessionable sour beer, from people who will happily sip sours all night – and Tahiti Treat is the perfect beer to do just that.”

Vault City, which has listings in more than 200 independent bars across the UK, as well as supermarket giants Morrisons and Tesco, has created the Tahiti Treat beer in what it calls a response to a shift in consumer perception of sour beer.

Smith Hay declared: “We’re the biggest sour beer producer in the UK, and now post-Covid, we’re starting to see growth at an international level, exporting regularly to over 20 different countries and collaborating with breweries like Amundsden in Norway, and Browar Stu Mosto in Poland, with plenty more in the pipeline.”

The Edinburgh-based brewer has already produced more than 45 new beers in 2022 alone, including Triple Fruited Mango and Blueberry Maple, which are the first and third best-selling lines in Tesco’s 440ml craft beer category; and Vault City also recently collaborated with comedian and broadcaster Ed Gamble to launch Canned Laughter, an Apple and Guava Session Sour with 20% of sales donated to Campaign Against Living Miserably.

Smith Hay told db: “People laughed when we said we were starting a sour only brewery back in 2018 but now more and more breweries are trying their hand at sour beer. Traditional sours can be an acquired taste, and often seen as a niche within the industry – the end of someone’s craft beer journey. We saw an opportunity for modern sour beer, through mixed fermentation and obscene amounts of real fruit, creating a more accessible drink and for many, a gateway into craft beer.”

Vault City turned over £2.4million in the last financial year, and has grown to a team of 25 across its brewery, office, bar and taproom divisions. The brewery unveils a trio of experimental beers every three weeks and also received national attention after becoming the first UK brewer to formally adopt a four-day working week in January this year.