It wasn’t just the weather that was hotting up earlier this week, as some Twitter users branded the broadcaster “ignorant” for his suggestion that drinking beer was the secret to cooling down.

No stranger to stirring up trouble, Clarkson took to Twitter on 17 July to suggest that his holiday destination was coping well with the heatwave: “It’s very hot in the South of France but so far as I know, there’s no DefCon 8 level 3 killer death heatwave warning in place.”

Many were quick to point out that wildfires in the region had resulted in more than 16,000 people being evacuated.

Undeterred, the former Top Gear presenter decided to offer more pearls of wisdom on social media, taken from a life on the road:

“I’ve spent my life working in extreme heat and we survived by having a beer under a tree. Climate change is real. Drink more beer.”

“Really hot in France this evening. But I’ve had a beer and all is well.”

However, while we may imagine that a chilled pint is the perfect antidote to a scorching summer, the drink’s diuretic qualities may mean that consumption could lead to dehydration as more fluid is lost through urination, though this is disputed..

NHS guidelines concerning dehydration state that drinking “too much alcohol” can worsen it. However, it is also suggested that making “drinking a social thing” can help to encourage greater consumption of fluids (though it suggests tea, rather than beer).

Drinkaware advises: “[limiting] the amount of alcohol you drink and drink plenty of water or soft drinks in between alcoholic drinks”.

Given that Clarkson implied moderation by suggesting that people have a singular beer in the shade, his advice largely conforms to these health recommendations.

Surprisingly, he did not use it as an opportunity to plug his Hawkstone lager, though the brand’s Instagram account shared a story telling users to “hydrate here”: 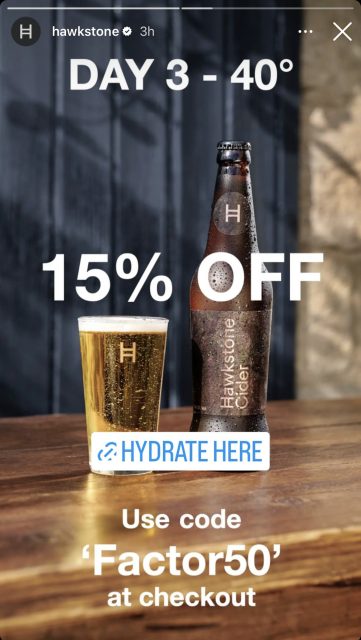 The issue of whether beer is hydrating or not is much-discussed, with evidence to suggest that it may be the perfect beverage for a heatwave.