British Airways and Fife-based InchDairnie distillery have teamed up to create a limited-edition whisky to celebrate the airline’s centenary, which will be served on flights in 2031. 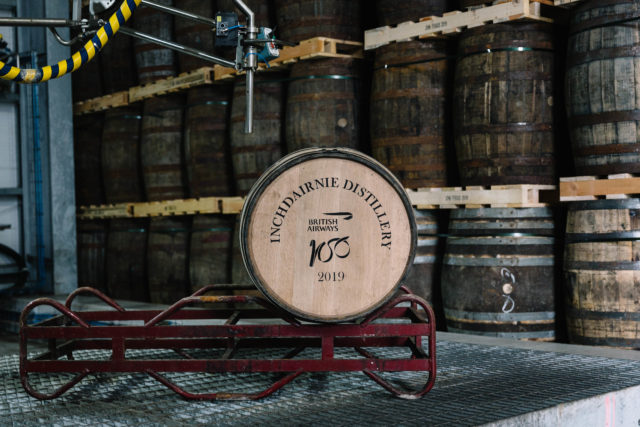 To mark World Whisky Day tomorrow (18 May), the two companies have teamed up to start the 12-year process of creating the limited-edition centenary whisky.

Representatives from British Airways aided InchDairnie staff during the distillation process and helped to pour the spirit into an ex-Bourbon cask. The cask’s heads are from a former red wine barrel, made from French oak.

After undergoing maturation, the whisky will be decanted into 300 bottles and served exclusively on board British Airways flights in 2031.

Kelly Stevenson, British Airways’ wine and beverage manager, said: “Celebrating our centenary is all about honouring our airline’s history, as well as looking to the future. InchDairnie has a modern and innovative approach to whisky distilling and we’ve incorporated touches with a nod to our history. In years to come our customers will be able to enjoy it from the comfort of their seat – we know it will be worth the wait.”

InchDairnie has also launched a centenary cask programme, the products of which will be showcased at the BA bar in New York in June. 12 casks are being offered exclusively to BA customers from now until the end of September.

Ian Palmer, managing director of InchDairnie, said: “We’re delighted we’ve been able to create a very special whisky for British Airways in their very special year. Although we are a new distillery who have a much younger heritage than British Airways, through the use of industry leading technology we are bringing together decades of industry experience and knowledge, enabling us to fine tune one of the most meticulously designed distillation processes in the world.”

This follows news of a series of centenary-inspired additions to BA’s inflight menu. These include a gin distilled by Pickering’s in Edinburgh which has been designed to be consumed at altitude; an English Bacchus bottled exclusively for BA by Chapel Down; a transatlantic IPA from BrewDog; a limited-edition travel-sized marmite and an in-flight afternoon tea experience.

BA has committed to spending £6.5 billion in order to improve its customer experience over the next five years with the purchase of new aircraft, new business class seats, new cabins, new catering, new lounges, WiFi and new travel destinations.

InchDairnie, based in Glenrothes, distilled its first spirit in 2015 and will release its single malt Scotch whisky in 2029.