British Airways is celebrating is centenary with some additions to its in-flight menu including a gin designed to be consumed at altitude and an English still wine bottled exclusively for the airline. 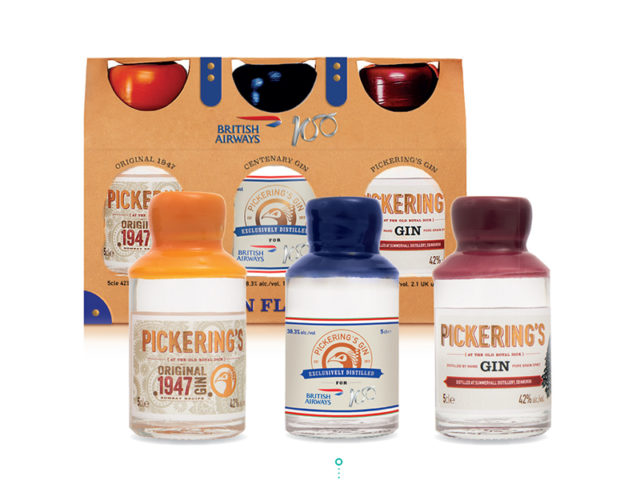 The launches form part of a series of ‘centenary editions’ that British Airways will be releasing in partnership with British brands during its milestone year.

In what the airline has described as a “world first”, it has teamed up with Edinburgh-based distillery Pickering’s to create a 10-botanical gin designed to be consumed at altitude.

The gin will be available as part of a trio pack for £18 on all short haul flights. As reported by The Scotsman, the gin has been distilled with lemon myrtle, the flavour of which, the brand said, performs particularly well at altitude, providing a natural sweetness that sits alongside floral notes from heather and rose also used in the gin.

It has been established that the dry air and low pressure experienced on board a plane reduces the ability to taste and smell, and in particular to identify sweet and salty flavours.

Head distiller and co-founder of Pickering’s, Matt Gammell, told the paper: “To banish so-called airplane ‘taste blindness’, we have carefully designed a botanical flavour profile that enhances what you lack when you’re soaring in the sky. As a distiller, developing a gin on the ground and then trialling it in the sky at different altitudes was a fascinating process.

“We trialled multiple iterations of the recipe in the air until we were confident that it would taste as good in the sky as it did on the ground.”

British Airways also also teamed up with Kent-based winery Chapel Down. The estate’s 2018 Bacchus, which has been bottled exclusively for the airline, has been added to the in-flight menu.

The airline also teamed up with condiment brand Marmite, and after revealing that it was the most confiscated branded food at airport security, it has created a centenary jar designed to fit within the limits of the liquid allowance.

It has also launched a centenary edition afternoon tea including a scone, jam and clotted cream for a traditional cream tea experience in the air.

Brewdog founders Martin Dickie and James Watt began brewing the beer on board one of the airline’s Boeing 787 Dreamliners, while cruising 500mph over the north of Scotland.

Cans of the 4.8% ABV IPA are available on offer on board all long-haul and short-haul flights and in selected lounges from this month.

The brewer its also set to open its first bar in New York in the British Airways’ Club lounge at JFK’s terminal seven.

Commenting on the food and drink launches, Jude Winstanley, British Airways’ head of ground products, said: “We have searched the length of the country to find some of the best of British brands to partner with for our centenary. We are delighted these limited-edition products will be available to customers on board this summer.”

Speaking about the new Brewdog beer, Martin Dickie, BrewDog’s co-founder, added: “The key thing is that the bitterness and fruit flavours aren’t really affected by the altitude, so we wanted to play on those two things and ramp up the sweetness. We really hope British Airways customers love Speedbird 100 as much as we do.”

British Airways is not the first airline to team up with food and drink producers to create bespoke products. Icelandic airline Icelandair commissioned Irish brewer Boyne Brewhouse to produce an own-label beer called Snæbjört, named after the “glow of Icelandic snow.”

Meanwhile, Brewdog’s transatlantic airline for craft beer fans took to the skies for the first time this year. However, there were complaints after the toilets had to be closed two hours before landing and the bar almost ran out of beer.

In legal news, in an effort to curb unruly behaviour, air passengers in the UK have been officially banned from consuming duty-free wine and spirits on board planes. As reported earlier this year, World Duty Free, which is the only provider of duty-free shops at most large airports in the UK, has tightened its control on the sale of duty-free alcohol.