Ryan Reynolds has used his appearance on Jimmy Fallon’s Tonight Show to promote his Aviation Gin brand, playing a daring drinking game that saw his spirit mixed with horseradish, bacon and even blood. 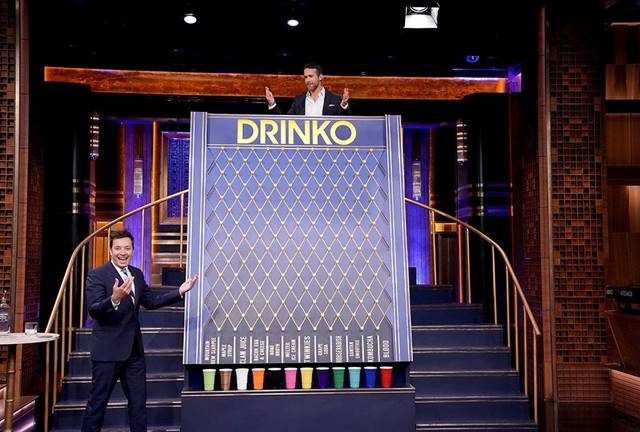 The actor bought the gin company in February of this year, and has since taken his responsibilities to promote the brand as its creative director seriously, which has included a stunt in which he interviewed himself.

Last night Reynolds appeared on The Tonight Show with Jimmy Fallon, putting his gin at the centres of a game that risked it being mixed with bizarre ingredients. Called DRINKO, it saw Reynolds drop a token through a pinball machine to select which mixer his gin should be accompanied with to create one-of-a-kind cocktails.

Reynolds’ final mix was a combination of Aviation gin with grape soda, ‘blood’, bone broth, bacon, egg and cheese, which he drained and chased with a straight Aviation Gin, “like a true owner”.

Discussing his new role as brand owner with Fallon, Reynolds joked: “We had our children and that’s when I realised that I love gin. That’s when I bought Aviation Gin.”

Ever the PR whizz, Reynolds offered a personal email address in a press release confirming the acquisition of the company in February, which fired out an automated, and humorous, out of office response from the actor.

Using this strategy to his advantage, Reynolds has been keeping his out of office up to date, with the latest detailing his love of gin.

It read: “My ‘official business’ is being on Jimmy Fallon, talking about Aviation Gin. How the hell is this considered business? Or for that matter, ‘official’? Aviation gin is the best damn gin on the planet and owning this company is turning out to be the best damn job on the planet. Why? I’ve got three reasons. 1) I get unlimited access to gin, B) I get to tour the country asking the wonderful people of the spirits industry to stock our product iii) I get unlimited access to gin.”

Less than 12 hours after appearing on the show, his email address had been emailed over 15,000 times.