Hip-hop superstar Eminem has opened a pop-up spaghetti shop to promote his new album, and to the delight of fan’s familiar with his 2002  hit Lose Yourself, it’s called Mom’s Spaghetti.

Eminem, aka Slim Shady, aka Marshall Mathers, now 45, has opened the pasta joint in his home town of Detroit, ahead of the launch of his album Revival, which was released on Friday.

The name for the restaurants comes from the track Lose Yourself and is based on the lyric, “His palms are sweaty / knees weak, arms are heavy / There’s vomit on his sweater already, Mom’s spaghetti.”

The lyric has become so well-known that it has become immortalised as a humorous meme on the internet.

Mom’s Spaghetti – based at The Shelter – was opened as part of a promotional push for the rapper’s ninth album, Revival, which features collaborations with Ed Sheeran, Beyonce and Alicia Keys.

Eminem, who rarely makes public appearances, briefly attended the restaurant in a surprise visit over the weekend to sign copies of the album for fans at the event.

Eminem released his first album, Infinite, in 1996, but it was his 1999 The Slim Shady LP which really kickstarted his career. 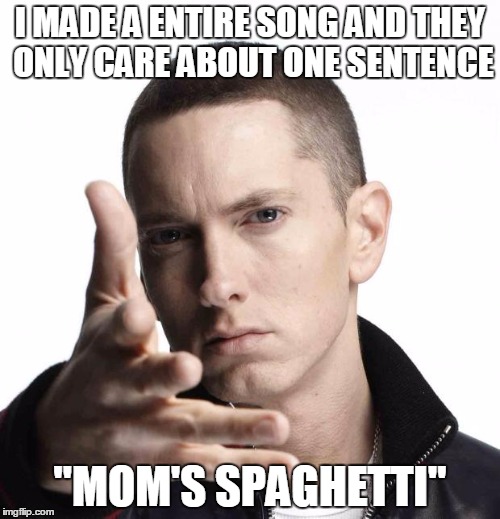