The liberation of Porto in 1809 was a vital first step in the Peninsular War, that would eventually see an Anglo-Portuguese army under Arthur Wellesley (later Duke of Wellington) drive the French from Portugal and Spain. 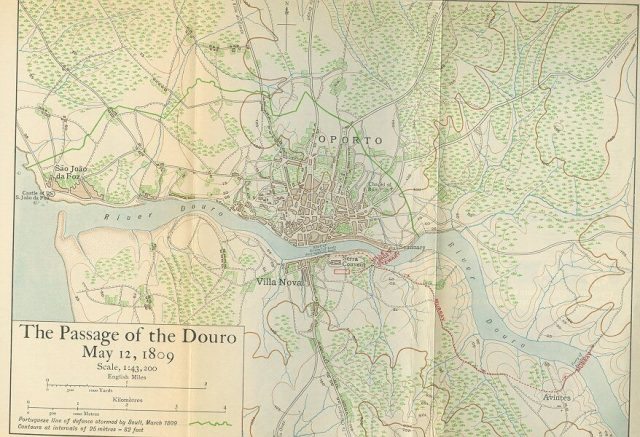 The French had invaded Spain in 1808 and swiftly routed the forces of the Bourbon king. A British expedition under general Moore sent to support the Spanish had been forced to retreat through the mountains of Galicia in the middle of winter.

Moore got his army away at Corunna but was killed during the battle. It had been a shambolic, ignominious opening to Britain’s continental involvement in the Napoleonic Wars, as so many British military campaigns have started through the ages. It was not a complete disaster however, as the army had avoided complete destruction. They would return but in the meantime the French continued their invasion unchecked.

After Corunna the French turned their attention to Britain’s oldest ally and enthusiastic opponent of Napoleon’s ‘Continental System’, Portugal.

Napoleon had left Spain in early 1809 with 45,000 men. His old enemy Austria was stirring once again and later that spring would invade Italy and Bavaria. He left behind him Marshal Nicolas Soult, with orders to invade Portugal in February.

Melt water and early rains turned the roads of the Minho into quagmires but by March, Soult had fought his way to the town of Porto.

The first battle was a one-sided affair, which ended in a terrible tragedy. With the French forcing the Portuguese regulars back towards the city, thousands of civilians tried to flee from Porto to Villa Nova de Gaia on the opposite bank. They stampeded across the one boat bridge that connected the two towns. Already weakened by Portuguese engineers so they could destroy it should the French win, it collapsed with predictably terrible consequences; thousands of townsfolk were pitched into the river and drowned.

Soult captured Porto and with it hundreds of tons of British military equipment left behind by Moore and also 30 British merchantmen “laden with Port wine” which had been unable to leave because of a “persistent North-Wester”.

At this point however, Soult found his lines of communication with Spain were cut after a Portuguese force captured the fort at Chaves. To make matters worse, Soult was now not only surrounded by a hostile populace but in April a new British army under a new commander, Sir Arthur Wellesley, landed in Portugal.

Wellesley immediately pushed up towards Porto and Soult energetically set about destroying all the bridges and bringing over all the boats he possibly could to the north bank of the Douro to deny any form of passage to this freshly arrived and rather dangerous enemy.

For several days therefore the two armies stared at each other across the Douro, the French in Porto, the British in Gaia at a perfect impasse. Wellesley called up boats from nearer the coast while he pondered the best plan of attack and studied the French positions from the garden of the convent on the Serra heights (the Mosteiro da Nossa Serra do Pilar). On 12 May one of his intelligence officers, Colonel John Waters was riding upstream with the prior of Amarante as a translator and guide when he saw a Portuguese in a little boat mid-river, waving frantically at him. The man turned out to be a barber and explained that four large wine barges, that had gone unnoticed by the French, were moored up on the opposite bank. Furthermore the bank was largely unguarded and the bishop’s seminary at the top of the bank (now the former seminary of Largo Padre Baltasar Guedes) would provide a solid defence for the British to occupy while more troops were ferried across.

With the help of the barber and the prior, Water rounded up several local peasants and the little party crossed over the river.

“It was a hazardous undertaking,” wrote Oman, “for one French picquet [patrol] had lately been seen to pass by, and another might appear at any moment.”

The barges are obtained however and taken over to the southern bank.

Oman continues: ‘They turned out to be big clumsy vessels, capable of holding some thirty men apiece.”- they were almost certainly ‘rabelos’ which at the time were owned by local boatmen who offered their services to the Port houses to ferry wine from up-river to the warehouses in Gaia/Porto.

Wellesley immediately acted on the opportunity offered him and set the 3rdFoot (‘The Buffs’) the task of seizing the seminary and a foothold on the opposite side.

Three batteries of artillery were pushed onto the Serra heights to cover the crossing. It was a nervy hour as the first men of the 3rd made their way over and began to fortify the seminary. It was not until the third trip when close to half the battalion was across that the first shots were heard from the gates.

Too late the French realised the danger. The surprise was total and the British were across the Douro. Marshal Soult was still in bed having breakfast when he was brought the news.

The French began to attack the seminary but their assault was impeded by the covering fire of the British artillery. With the 3rd foot now all across the battalions of the 66th (Berkshire) and 48th (Northamptonshire) followed.

Later in the morning three battalions of the French 70éme Ligne began a more concerted attack but, as Oman relates, “a thousand English infantry, comfortably ensconced behind stone walls, and protected on their flanks by the storm of shot and shell from the opposite bank of the river, could not be easily moved.”

With the French distracted the people of Porto now took a hand in the battle. Wellesley and his staff watched as hordes of people rushed to the riverbank and, taking to the boats and “anything that would float”, began streaming across the Douro to Gaia. Rather than fleeing, the citizens then began taking the men of the brigade of Guards and 29th (Worcestershire) Foot across to Porto.

The British swept up through the city and took the French attacking the seminary in the flank. With their position completely untenable Soult ordered a retreat which quickly turned into a rout, albeit one that could not be properly exploited by Wellesley due to a lack of available cavalry. It was the only blight on an otherwise brilliant coup de main.

Although the celebration in Porto that night can well be imagined, the prospect of British troops in control of a major wine city was a cause of some concern to British officers – drink being the enemy of discipline.

When allowed to though, the British army got down to drinking as much Port as they could.

Julius von Hartmann, an artillery captain in the King’s German Legion, remembered 20 of his gunners drinking 41 bottles of Port between them in one sitting.

Meanwhile, while the battle of Porto was going on, a young British cavalry officer in the 23rd Light Dragoons called William Warre was part of a force sent down river to cut off French troops trying to cross the Douro. Warre and his troop got to a bridge over the Tamega river and set up a barricade. What arrived at the bridge however were not a few French stragglers but the entirety of Soult’s retreating army.

Warre wisely decided to fall back. He served throughout the war, mostly on the staff of General Beresford and also supplied Port to Wellesley from his family’s company. He even had to source some wines from stocks in London as, “at Oporto it is impossible to get any old wine.”

That’s presumably because men like Hartmann’s gunners had drunk it all.

In time, among his many accolades and titles, were several Portuguese honours but one he particularly liked and which took precedence in his style behind only Duke and Marquess Wellington, was Marquess Douro.