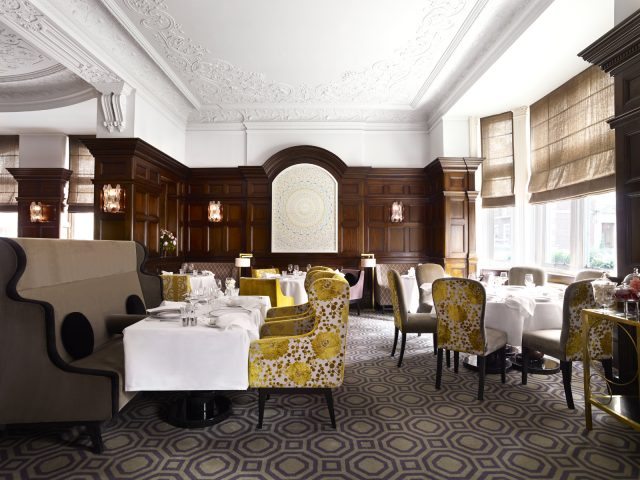 The concept: Hélène Darroze is something of a superwoman. One of the first female chefs in France to be awarded two Michelin stars, she shares her time between London, Paris and Moscow while looking after her two young daughters.

Born in Landes in southwest France, Darroze trained under Alain Ducasse and took over from Angela Hartnett at The Connaught in 2008 as part of the Mayfair hotel’s £70 million refurb. Her culinary philosophy is simple: to use high quality seasonal ingredients to great effect, letting each element of the dish shine.

This deceptively simple approach won her a star in London in 2009 and a second star in 2011, making it one of only eight restaurants in the capital to hold two stars. It’s impossible to dine at a two star restaurant without a certain level of expectation. Competing in one of the world’s most dynamic dining scenes, fine dining restaurants are having to work harder than ever to impress their increasingly demanding guests, who expect to be entertained as well as fed.

The décor: With its dark wood panelling and high ceiling cascading with angels, the dining room has the feel of a plush gentleman’s club. It’s impressive and elegant without being overly formal or lifeless.

Tables are cleverly spaced to allow for both intimacy and the feeling that you’re plugged into the buzz of the room, which swings to a blues beat. Chatter is animated and the environment is relaxed, despite the grandeur of the setting, which is a hard double act to pull off.

The food: Proving that it doesn’t take itself too seriously, menus take the form of a game of solitaire – the key ingredient in each dish is written on a white ball resting in the wooden board.

It’s a fun way of getting you to think beyond the confines of a traditional menu and demands a certain element of trust in the chef, leaving you hoping that the other ingredients in the dish will be equally delightful.

Before any decisions are made, a trio of canapés help to whet the appetite. The Parmesan and mushroom consommé is an enticing blend of earthiness and salty savouriness proving Darroze isn’t fearful of bold flavours. A tiny cone filled with iodine-rich beef tartare with an unctuous creamy top makes you long for a life-sized version. Given the choice between five or seven dishes, we opted for five. Guided by my favourite flavours, my key ingredients were: foie gras, scallop, wild garlic, duck and chocolate.

I presented my selection to one of many waiters that graced our table. He did a little re-arranging then darted off to the kitchen. Unsure which of the ingredients would lead the charge, the foie gras was first out of the blocks.

Served as a disc of paté resting on a bed of cooling rhubarb jelly flecked with thai basil, the flavour combination was inspired – the tangy rhubarb slicing through the creamy indulgence of the foie, which can so often be cloyingly rich. I sensed ginger and mint in the mix too, which added to the aromatic freshness of the ensemble.

Signature dishes: Given that Hélène works so seasonally, dishes don’t stay on the menu for long. An exquisitely crafted cube made from layers of wild garlic, smoked eel and lemon-laced ricotta had the moreish smokiness of freshly grilled bacon. Another triumph of balanced flavours, the lemon lifted what could be an overly rich dish into a rarefied realm of deliciousness.

A tandoori scallop meanwhile, was prettily presented with ribbons of carrot twirling through it like an over-zealous signature. Sourced from Scotland, the silky, buttery scallop was enlivened by carrot, coriander and slivers of candied citrus.

Moving on to the meat of the matter, a modest hunk of perfectly pink Challans duck arrived with a roof of honey-drenched nuts and buckwheat. Worried it might be too sweet, the savoury jus tempered the honey perfectly in another masterclass in how to astutely balance textures and flavours.

The drinks: While many meals are remembered for either the wine or the food, both were of equal importance at The Connaught. The wine list is bountiful and diverse, though leans more towards the Old World as you’d expect. Using the Coravin, many a liquid treasure is offered by the glass.

We began with a flute of Krug Grande Cuvée, which was all honeycomb, hazelnuts and toasted brioche, then moved on to a glass of Domaine J. M. Boillot Puligny-Montrachet Premier Cru Les Referts 2013 that charmed with notes of honeysuckle, lemon pith and acacia.

It was a privilege to revisit Didier Dagueneau’s Silex, an utterly unique wine unlike anything I’ve ever tasted, its dynamism and energy unfurling from the glass like a tightly coiled spring. Meanwhile, Marqués de Murrieta’s revered Castillo Ygay Gran Reserva 2007 had all the elegance of a dandy in a velvet smoking jacket.

Flying the flag for the New World, Tim Kirk’s Clonakilla Shiraz Viognier was hauntingly beautiful with its ethereal texture and potent perfume. A final glass of Pichon Lalande 1999 was perfectly poised between youth and maturity, its inviting, supple, generous dark fruit giving way to notes of leather, cedar and liquorice.

Who to know: Corsican sommelier Camille will tempt you to use the Coravin to its full effect via the likes of Château d’Yquem 1998 for £90 a glass.

Don’t leave without: Sticking around for the petit fours – among them is a chocolate and peanut combo that could put Reeces Pieces out of business.

Last word: This review is overwhelmingly positive but I found it genuinely hard to find fault in the place. The desserts were a bit of a low point, failing to reach the highs of the mains, and the maître d’ was icily aloof in the way only the French can get away with, but this is just splitting hairs.

A night at The Connaught isn’t cheap, but it offers value for money. Throughout the evening you’re continually reminded that it’s two star venue; from the level of service and the little extras that weave their way into the meal, to the quality of the food and wine on offer.

More importantly, the experience is thoroughly enjoyable. Darroze has managed to achieve the almost impossible goal of offering incredibly high quality, beautifully executed cuisine in a relaxed environment that still has a sense of occasion. It’s well worth saving up for and splashing out on.