Christmas is fast approaching, and with that comes the obligatory panic buying of presents. Get some inspiration for the drinks lover in your life with our round-up of boozy gifts. 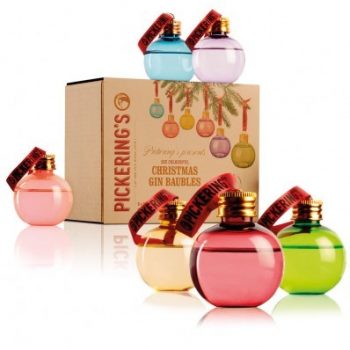 Forget chocolate baubles, this year Pickering’s Gin has launched gin-filled baubles that can be hung from your tree. Demand has been so high that the Edinburgh-based gin producer has been struggling to keep up with orders for the Christmas novelties.

“The baubles started off as a bit of fun for a Christmas fair and people went absolutely wild for them,” said Marcus Pickering, co-founder of Pickering’s Gin. “We sold hundreds in minutes, and decided to spread the Christmas cheer by adding them to our production line as a fun, seasonal offering.”

Each bauble is filled with 50ml of Pickering’s Gin and comes decorated with a Pickering’s ribbon. To meet the “unprecedented” demand, next year the distillery will up production to 300,000 baubles, with production expected to begin in early January. 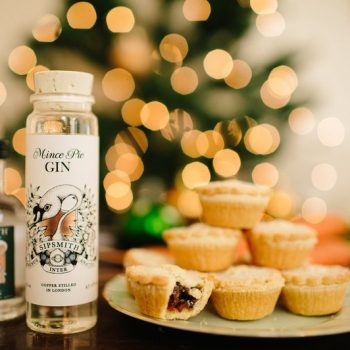 London-based Sipsmith Distillery has unveiled a limited edition Mince Pie Gin for the festive season, hailed as “Christmas in a glass” by master distiller Jared Brown.

Mince Pie Gin will launch as part of a limited edition gift set that includes a 90ml bottle of the new offering along with a miniature of Sipsmith London Dry Gin.

On the nose the Christmassy spirit has been described as “warming cinnamon and nutmeg entwined with sweet clove and Madagascan vanilla”, and on the palate it has notes of “spiced raisin and rich dates followed by fresh juniper and Norwegian spruce.” 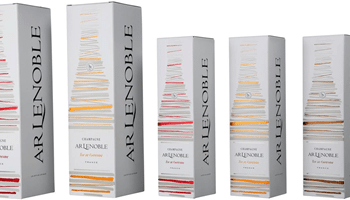 The gift boxes, which are available with four different AR Lenoble blends; NV, Blanc de Blancs and 2008 vintage, in standard and magnum size from Flint Wines, feature an abstract bottle motif suggestive of a Christmas tree.

“Stylistically these Champagnes are precise and vinous, just as we like them,” said director of Flint Wines, Sam Clarke. “These special packs will now make boxes look on the outside as good as the Champagne tastes inside. We are sure they will be loved by retailers and customers alike.” 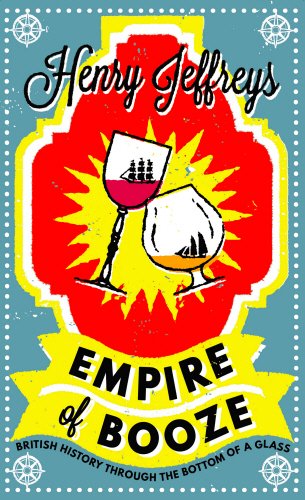 A new book charting the history of Britain’s role in the shaping of some of the world’s favourite alcoholic drinks is the perfect gift for history buffs, who may not realise that without Britain’s influence many drinks known to he world today would not exist.

Henry Jeffreys’ ‘Empire of Booze’ charts the growth and development of various drinks from Madeira to India pale ale alongside the more usual narrative in this island’s story. The links between Britain and Champagne, beer, Bordeaux, Port, Marasala, gin, rum, Cognac, whisky and more are each explored in separate chapters, along with their own impact on British culture and society.

Packed with facts and trivia the book is aimed at drinks connoisseurs and novices alike as it explores the frequently fascinating and occasionally eyebrow-raising past behind Britain’s taste for fermented grape and grain; debunking old myths and often replacing them with the hard truths that are just as (if not more) interesting.

Empire of Booze is Jeffreys’ first book. He has written about drinks on his blog ‘Henry’s World of Booze’ since 2010 and is a frequent contributor to numerous publications including The Spectator, Guardian and the Oldie.

Where to buy: amazon.co.uk

5. Mature Your Own Whisky Kit 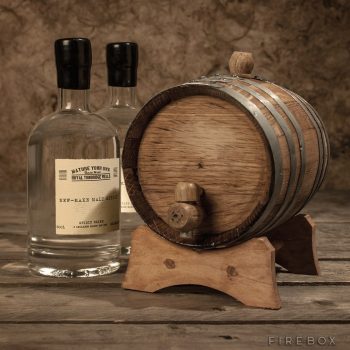 We can’t guarantee the quality of the final spirit, but for something a bit different this mature-your-own whisky kit fits the bill.

The kit comes with two bottles of new-make malted barley spirit and a Kentucky Oak barrel, toasted as Medium to heavy char. Pour it in and then all you have to do it wait, from a week to a couple of months depending on your oak preferences.

The first fill, freshly toasted barrel is likely to impart a good kick of oak, with the barrel able to be re-used up to to more times before its oak influence is likely to wane.

Where to buy: firebox.com 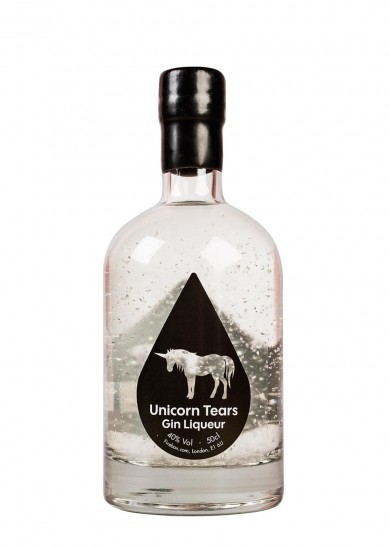 For that friend who has drunk every first growth, rare spirit and cocktail, this unique bottling of Unicorn Tears gin liqueur might just be a new one on even them.

A 40% abv gin-based liqueur, Unicorn Tears is sprinkled with a shimmering of edible silver flakes for added visual impact, hence the unicorn name. Described as “juniper-driven and citrusy on the nose”, the palate is luscious with notes of candied orange, herbs and spice. The unusual liqueur is intended to be drunk on its own, over ice, or as the base of a sweeter G&T or cocktail.

Where to buy: harveynichols.com 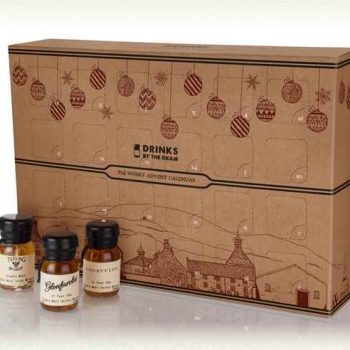 Quickly becoming a staple of the Christmas buildup, Master of Malt has once again launched a range of spirits-filled advent calendars, including a build-your-own and gin variants, but the Scotch whisky version is the original.

Behind each of its doors is a different wax-sealed 3cl Drinks By The Dram sample of whisky. Among them you will find everything from single grain to rare Scotch worth up to £600 a bottle, as well as a 50 year old Scotch, brand new releases and the World’s Best Blended Whisky, as judged by the World Whiskies Awards 2014. 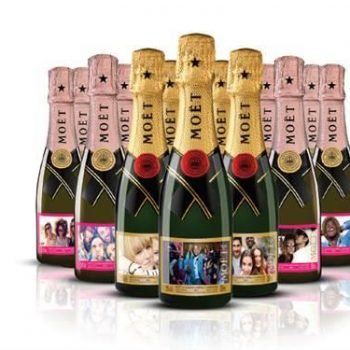 Moët & Chandon has launched its personalisation service for a second year at Selfridges, as well as at select on-trade UK accounts for the first time.

Following the roll-out of the initiative in 2015, the company has again partnered with Selfridges to install personalisation stations at its London, Birmingham and Manchester stores. Here, shoppers can upload an image of their choice and create their very own front label for Mini Moët Impérial Blanc (RRP £19.99) and Rosé (RRP £19.99) cuvées. A bespoke in-store Moët wrapping facility (RRP £5 per item) is also available, allowing personal messages to be added to branded gift wrap.

Where to buy: Selfridges, and various off-trade outlets 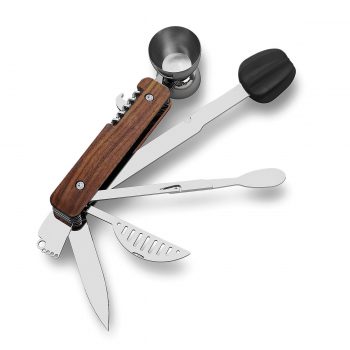 Combine your tool kit in one handy pen knife and never be without a jigger again, perfect for making cocktails on the go.

The utility tool includes 10 implements, including a zester, muddler, knife, reamer, a channel knife, a jigger, stirrer, and strainer, as well as a bottle opener and corkscrew.

Where to buy: uncommongoods.com 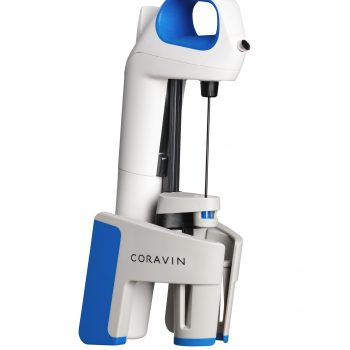 Coravin’s Model One is its most competitively priced model yet, launched with the aim of appealing to the growing millennial wine enthusiast demographic.

Coravin systems allow users to dispense wine from a bottle through a specially designed needle without removing the cork. An accompanying gas capsule inserts inert argon gas into the bottle to replace the removed wine. The pressure of the argon pushes the wine through the needle, whilst preventing any oxygen from entering the bottle.

Having initially launched in the US, the original Coravin made its first UK appearance in October 2013, priced at £249.

Coravin Model 2 was launched in the US last year, and in the UK in February of this year. That model features an improved needle which pours wine 20% faster than the previous model and a more streamlined design. Model 2 carries an RRP of £279.  More recently, Coravin launched the Model 2 Elite which, being sold in three different colours – red, silver and gold with a chrome finish – was aimed more at the the private consumer than on-trade customers.

Model One, with its £199 price tag, is the least expensive Coravin device yet.