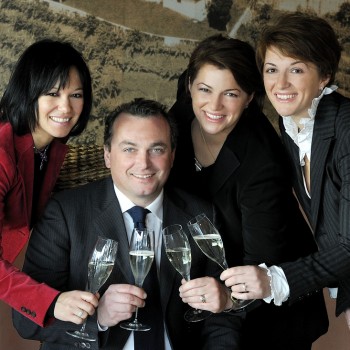 Designed to create a contrast with the “more austere and historically significant Follador,” whose sparkling wines fall under the Valdobbiadene-Conegliano DOCG, Ca’ dei Noni is described as offering a “lively, colourful, fresh” image thanks to its “contemporary” packaging.

The range includes a non-sparkling white Prosecco DOC Treviso, another white, this time a DOC Lugana made from grapes grown on the southern shore of Lake Garda, a passito-style dessert wine from Piedmont, a selection of Cabernet Sauvignon wines from Follador family vineyards in the Montello Colli Asolani DOC, and a ripasso from Valpolicella Classica.

“Fairs as influential and important as ProWein and Vinitaly allow us to share our story with the rest of the world,” said Christina Follador, marketing manager for the family business.

“It’s a story tied to the name of our father Gianfranco Follador, one of the pioneers of Valdobbiadene Prosecco, who was among the first in the region to move towards the DOCG sparkling Charmat method. In addition to this we are very pleased to take this opportunity to introduce our new line of wines called Ca’ dei Noni.”

The wines will be available to taste alongside Follador’s newly released 2014 vintage at the company’s ProWein stand, Hall 16, E40, as well as its Vinitaly stand, Hall 5, B2.

A full preview of ProWein will appear in March’s issue of the drinks business.