Scottish brewer Innis & Gunn is launching an online shop this September, allowing customers to order beer straight to their doorstep. 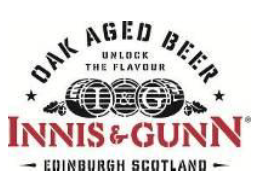 In addition to stocking the firm’s core range of Original, Rum Finish and Blonde beers, the website will sell branded merchandise and limited edition bottles which, until now, haven’t been available in the UK. These will include Independence Day 2012 and Spiced Rum Aged.

The company, which was established in 2003 by brewer Dougal Sharp, has built a reputation for its beers aged in a variety of oak casks.

Sharp, now the CEO of Innis & Gunn, said, “We have an international following on the web; consumers who tune in to every new happening. We created our website to be an information hub for this community initially, as well as newcomers to the brand, but it was always part of the plan to make our beers available to everyone to buy. This is the first step in that process.”

Currently hosting its first pop-up bar to take advantage of the Edinburgh festival season, Innis & Gunn has enjoyed an average growth of 56% year-on-year since its formation and now claims to be the best selling British bottled beer in Canada.