Château Lafite Rothschild has brought out its first new label in more than 100 years which is aimed at the premium on-trade market. The legendary Bordeaux estate, which has been owned by the Rothschild family since the 19th century, has launched the 2018 vintage from its Pauillac property, Anseillan du Château Lafite Rothschild, according to the Robb Report. It is the first new release by Lafite since Carruades de Lafite (which was known as Moulin le Carruades until the 1980s) was created in the late 19th century, after being purchased by Château Lafite in  1845.

Anseillan du Château Lafite Rothschild  is named after a hamlet that has been part of the Lafite estate since the 1970s, (the house originally housed Lafite’s agricultural workers, farmers and vignerons) with its vineyards visible from the Lafite Rothschild château, comprises 48% Merlot, 39% Cabernet Sauvignon and 13 % Petit Verdot (RRP: £65).

Grapes from different plots are are vinified separately in concrete, wood and stainless-steel tanks, before being aged in barrels before being blended.

Saskia de Rothschild, DBR Lafite’s executive chairwoman said that the project dated back to a blending session for the Lafite team in 2014 and had started slowly with a few hundred magnums every year, with the team seeing how the bottles evolved.

“In 2021, we tasted all the trials we had produced for every past vintage and found there was something there. That’s when the team decided to release this wine with the vintage 2018,” she said.

2018 also marked the 150th anniversary of the Rothschild’s acquisition of Château Lafite.

It is aimed primarily at the on-trade and “shared at restaurant tables around the world that have sometimes forgotten how good it is to open a bottle of Bordeaux,” de Rothschild was reported as saying.

The Anseillan vineyards are currently being restructured and used to test new growing techniques with a view to enhance their biodiversity, which is part part of a wider plan to eventually convert all the domain’s vineyards to organic and biodynamic farming.

Louis Caillard, Lafite’s director of viticulture said the restructure of the Anseillan vineyard was being done “for the fifty or hundred years to come”.

“It is an incredible playground in terms of terroir as there are three different soils, gravelly, clay and clay-limestone,” he added.

DBR described it as “well-balanced on the palate, with lots of volume thanks to the Merlot, and a great structure and freshness brought by the Cabernet Sauvignon”, which it said gave the characteristic length of Pauillac.  Although young, it is “accessible” now but will be at its peak between 2023 and 2028, it said. db‘s Bordeaux correspondent, Colin Hay’s tasting notes can be found below. 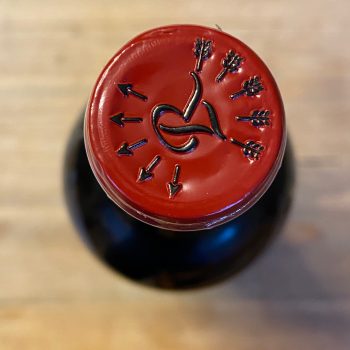