03 October 2022 By Arabella Mileham
Independent wine bar and bottle shop Drop Wine is ramping up its presence across London with the opening of two new franchise stores, in Kensington and Dulwich. 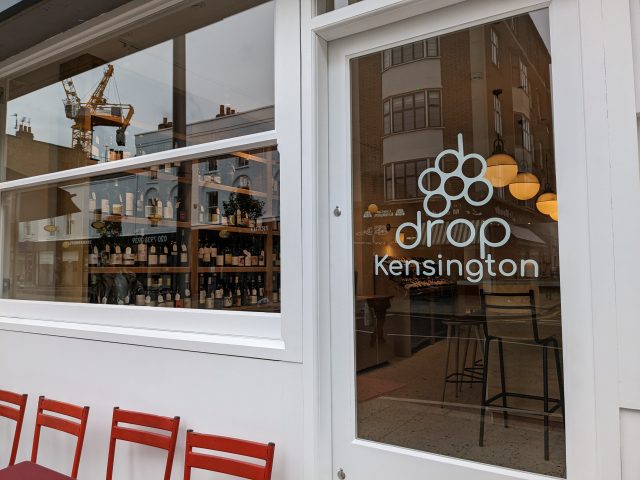 The two new shops, situated on Earls Court Road in London’s W8 and Melbourne Grove, East Dulwich, SE22 are the  retailer’s fourth and fifth sites. Both store will feature a 200-strong wine range, of off-the-beaten track varieties, fine wines and and “icons of the wine world with suitable cellar age”, along with a rotating selection of wines available to buy by the glass and carafe. They will also serve a range of small plates such as cheeses and charcuterie, savouries, empanadas and salads.
Drop Wine was originally founded as a wine delivery service, Drop Wine App in 2016, by the team behind wine bistro The 10 Cases and Parsons Restaurants, Ian Campbell and Will Palmer.  The app launched to deliver wines within an hour to Londoners in zones 1 and 2, from a 150-strong wine list, and later The Drury Lane Drop bar and shop in Covent Garden.
A second shop and bar concept, Drop at no. 11 in Amersham, was opened in Autumn 2021 after a successful crowdfunding campaign in 2021 that raised more than £500,000 and the duo are planning to open a further ten franchise stores in London this year. The business model will see them collaborate with on-trade professionals on a franchise basis, with the intention to scale up the operation to around 100 stores nationwide in time. This would include some in rural area that could act as ‘dark’ stores hubs for the nationwide roll out of the delivery business they told Big Hospitality in February last year.

Drop Kensington is the second franchise store to open this year, following Drop on the Common in Clapham, in March.  It is owned and operated by wine professional Dominic Condon who has worked in bars, shops and restaurants in the UK and abroad, bringing in harvests in New Zealand, Tuscany and Provence. He said that opening Drop Kensington as “dream of mine [that] has come true”.

Meanwhile the Drop Dulwich is owned and operated by Australian-born Hayley Try Carreira, who has worked in the London restaurant scene for over a decade, most recently as operations manager at José Pizarro Group, and prior to that Selfridges, and Zucca. Previous roles include restaurant manager at Chrysan for Hakkasan, and Viajante and assistant manager at two-Michelin starred establishment The Ledbury.

Carreira said that The Drop Dulwich has given her “the perfect balance between being a business owner, working with a great network of professional people, and the latest technology with the app bringing great wine to people’s doors in the South East of London.”

The Drop Dulwich opens its door on 8 October.