After a three year Covid break, Hong Kong Rugby Sevens will return on 4-6 November 2022. Under Covid restrictions, fans are allowed to drink but not eat in the stands. 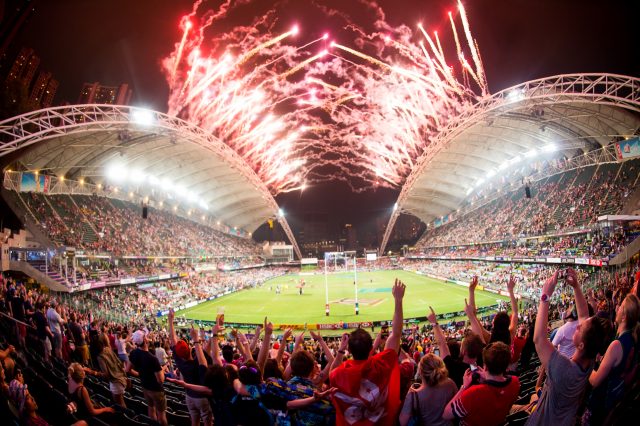 Hong Kong’s popular international Rugby Sevens event will be staged in November this year. As Hong Kong Rugby Union chairman Patrick Donovan said, the event is highly anticipated after a three and a half year postponement, and the organiser will continue to consult with the government about prevailing Covid measures in place at the time.

Commissioner for Sports Yeung Tak-keung announced that the consumption of food this year would be limited in order to “reduce and minimise the mask-off time at the spectator stands”. If spectators would want to eat, they can only eat in the designated “eating area” which the exact operation is still under discussion with the government.

Even though drinking is allowed in the stands, spectators are required to put masks back on immediately afterwards. Yeung called on spectators to comply with the rules, meanwhile, the Rugby union will also send staff to station at the stands to remind the audience.

On top of that, other Covid restrictions at Hong Kong Sevens include the limit in capacity – the 40,000-seat Hong Kong Stadium will operate at an 85% capacity over the three days. Spectators will be seated in groups of eight seperately in the stands. While the team players and staff will get in the “closed-loop” hotel bubble to bypass hotel quarantine. They will have no contact with the local Hong Kong community and travel by arranged transportation to and from the venue.

Currently, a seven-day hotel quarantine is still mandatory for all arrivals from foreign countries, but the government is due to lift the regulations next week.

The coming Hong Kong Sevens has been announced as an additional 11th tournament at the beginning of the 2023 World Rugby Sevens Series. In this edition, the core Sevens Series teams will be playing with Hong Kong joining the main competition.