One of Saumur and Loire Valley’s leading sparkling wine producers – as well as one of its oldest – Bouvet-Ladubay is best known for its traditional method sparkling wines, many of which are made with a dash of Chenin Blanc to reflect the minerality of the terroir. 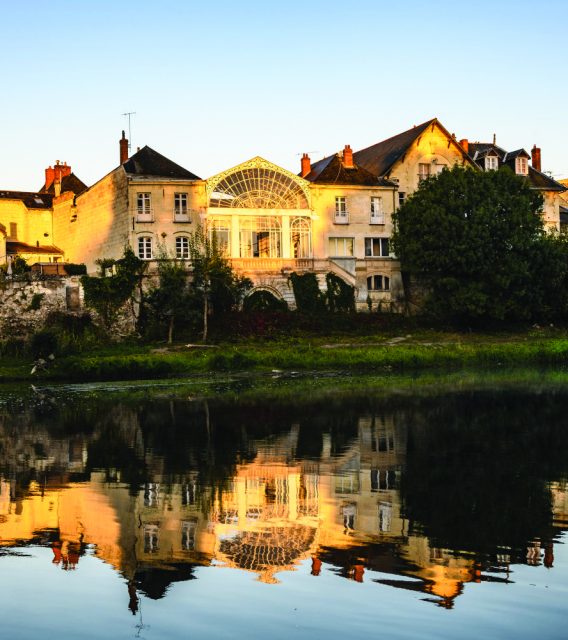 The company was founded in 1851 by 23-year old Etienne Bouvet and his wife Celestine Ladubay in St Hilaire St Florent, when they bought the cellars located right under the St Florent Abbey ruins, where the wines are cellared until a new facility was built in 2008.

Following Bouvet’s death in 1908 and the turbulence of the first world war and economic slump in the early 20th century, the estate was bought by Justin-Marcel Monmousseau in 1932, who restored the reputation and quality of its wines, and built its export business. However, in order to open new horizons for the company, it was sold to Champagne Taittinger in 1974, although with Monmousseau’s grandson, Patrice Monmousseau remaining at the helm, it continued to enjoy considerable independence. This allowed the winery to preserve its family spirit when a controlling stake of the business was sold to Vijay Mallya in 2005 and subsequently passed to Diageo in 2014. However, the following year, Patrice Monmousseau and his daughter Juliette together with new investment partners, bought back 100% of the shares of the company, returning it to family hands.

According to CEO Juliette Monmousseau, the decision was buy back the estate lay in establishing stability for its employees and the continued development of its business. And while she says that while not a lot has changed in terms of the production of the wines, the family ownership has “absolutely strengthened” Bouvet Ladubay position in the region as an independent company and the main producer and exporter of Loire sparkling wines.

“It has strengthened the relations with many of our partners: the winegrowers we work with, our various supplier and our customer and of course the whole Bouvet Ladubay team, as it is not only my family who has been here for generations, many of us share this history having relatives who worked here too,” she explains.

Monmousseau credits her father Patrice with the continuity of the house style, pointing out that only four people have been involved in the winemaking in the last thirty years – her father, herself, head of production Grégory Fournier and Vincent Herbreteau who handles the cellar.

It was also Patrice who championed  oak barrel aged cuvées.

“In those days,  vintage cuvées weren’t a thing in Loire Valley for sparkling wines,” she points out. “My father started oak barrel aging close to 30 years ago – back then only a few houses in Champagne would use oak to age the wine – in order to reach evermore sophistication for the Chenin and the Chardonnay.”

“Chenin is THE grape for Loire Valley whites from sparkling to late harvest,” Monmousseau notes, adding that it is the 100% Chenin Saumur Brut Bouvet Saumur Brut NV – a wine that that is aged for a minimum of 12 months on the lees after 2nd fermentation – that showcases the terroir of Saumur in particular.

The portfolio comprises three types of wines produced via the traditional method – a méthode traditionnelle without AOP , Saumur Brut AOP and Crémant de Loire AOP – and 12 different cuvées of varietal wines, whites and rosés and with different amounts of aging, different styles of oak aging, and different dosages.

“We are the main house producing Saumur brut Sparkling wines, our beloved AOP that we consider like a grand cru of Loire Sparkling wine,” she says – but it is the Saphir Saumur Brut Vintage 2019 that is “the heart of the Bouvet Ladubay Collection”.

First created by her father in 1972, it was named in memory of the sapphire worn by her mother as an engagement ring.  The blend, which comprises 90% Chenin with 10% Chardonnay, is aged for 18 months after its second fermentation  to produce a “sharp and precise Saumur Brut that expresses Saumur’s limestone, claciary (calcareous/chalk) and clay terroir”, Monmoussea says. A food friendly cuvée, each vintage celebrates a different contemporary artist who has exhibited at the company’s Contemporary Art
Center in Saumur,  with an ‘artist capsule’ on top of the cork.

Another highlight of the portfolio is the Trésor Saumur Brut 2018, a 80%/ 20% Chardonnay, Chenin bland that has been aged on the lees for 24 months after its second fermentation, along with Zéro Saumur Extra-Brut 2017, a limited cuvée zero dosage selection from the blend of Trésor, of which only 40 000 bottles are produced.

“Cabernet Franc is the red grape of Loire Valley, the unique varietal from Touraine to the end of Anjou including Saumur, giving birth to still rosés also in the off dry style like Cabernet d’Anjou, to muscular and full bodied in the Chinon area for example,” Monmousseau says.

“Our Bouvet Saumur Brut Rosé is a mosaïc of the Anjou-Saumur terroir, we aim at offering fruit forward yet balanced sparkling wine with a Brut dosage.”

The medal winners from The Global Wine Masters

A wonderful example of fine traditional method fizz with a hint of oak-influence, this vintage expression sees its base wine – a blend of Chenin Blanc and Chardonnay – aged in barrels to bring added richness and complexity, but no oxidative characters. The result is a generous yet refreshing glass of sparkling, with aromas of baked bread, peach, citrus, smoke, toast and beeswax, and a palate that’s creamy-textured, with a hint of sweet vanilla, and mouth-filling flavours of honey and pastry, which are then followed by notes bitter lemon and chalk, bringing a dry, crisp finish to this powerfully-flavoured Saumur Brut.

Could this be the best value blanc de blancs on the market today? For a around £15 (UK retail) one can snap up this pure Chardonnay, single harvest traditional-method sparkling wine of depth and finesse. Yes there’s the zesty freshness that makes blanc de blancs so appealing to sip, but also the mouth-filling characters of fine fizz, from baked bread to beeswax, ripe apple and even a touch of pineapple to bring some richness to this palate-cleansing crémant.

Another bargain from Bouvet-Ladubay, this Saumur Brut delivers hallmark bottle-fermented fizz flavours for not much more than a tenner. There’s brioche and biscuit, apple and pear fruits, and a fresh, chalky taste and texture to the finish too. It’s quite a rich glass of sparkling, but biting fresh too.

This pale-onion-skin pink fizz is yet another good-value drop from Bouvet-Ladubay. Featuring plenty of appealing flavours, from red apple to rosehip and pomegranate, along with refreshing notes of chalk and citrus, there’s lots of character to this pretty wine. And, while it has a mouth-filling, creamy-textured sparkle, and ripe orchard fruit, there’s a dry, refreshing edge to the fizz too.

Another great-value fizz from Bouvet-Ladubay, but this time in a bone dry style. Fear not, however, this is not unpleasantly lean and biting. Using ripe fruit, and a touch of barrel-ageing, as well as lees influence, this is a textured sparkling wine with some creamy vanilla characters, notes of peach and pineapple, along with plenty of biscuity richness. Then, when it comes to the finish, it is bright and cleansing, featuring notes of crisp apple and chalk, and, with no sugar added when it’s disgorged, a complete absence of sweetness.