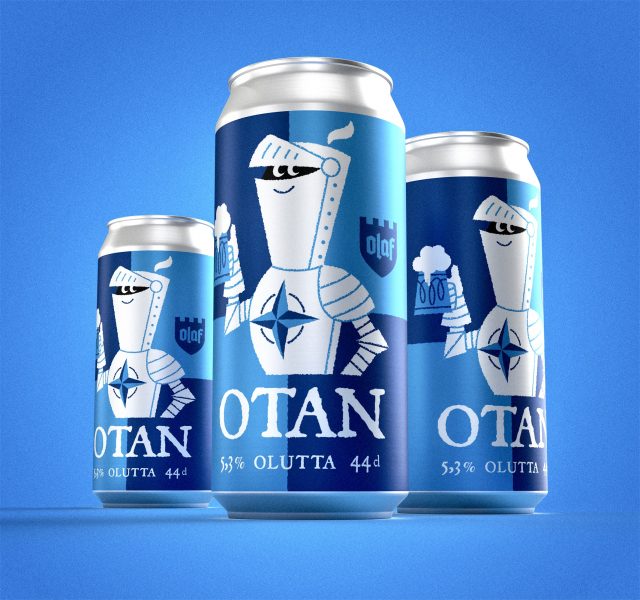 Olaf Brewing, based in the town of Savonlinna near the border with Russia, created the celebratory beverage to mark “our independent nation, making an independent decision”.

The brewery takes its name from Savonlinna’s St. Olaf Castle, which in turn is named after King Olaf II (later canonised to St. Olaf). The medieval theme also appeared on the brewery’s Party Like It’s 1475 Pils. Indeed, Savonlinna has been fought over across the centuries. For Finland, in light of recent events, the fragility of borders does not feel like ancient history.

The NATO beer, OTAN, is both a reference to the French term for the organisation, and a pun on a Finnish expression. “Otan olutta” translates to English as “I’ll have a beer”. One of St. Olaf’s sayings, taken by the brewery, was “when times are hard, we have nothing but each other and beer to turn to.”

The knight motif on the can, a cartoonish depiction of St. Olaf, has the NATO star emblazoned across his chest. Though products such as these are light hearted, there is an appreciation for how momentous joining NATO could be for Finland, and how perilous the current situation is. Brewery founder and CEO Petteri Vänttinen said that since the invasion of Ukraine “we have been worried about our neighbour to the east again.”

Olaf Brewing has also expressed a desire to send the beer to the Finnish President, Sauli Niinistö, parliament and to defence forces.

The brewery, with its eight employees, is struggling to keep up with the demand since launching on May 16 as orders from across Finland and beyond flood in. Though Finland, alongside Sweden, has only just begun the process of applying to join NATO, Väntinnen is optimistic: “Let’s hope everything goes well. But yes, you can already have one moderate beer at this point.”

War in Ukraine has prompted immense political decisions, and political statements from drinks brands. For example, “Putin is a d***head” beer is gaining popularity in the US.