Experts reveal how alcohol affects your body while on a flight

The effects of consuming alcohol while on a flight have been disclosed by experts who have studied human responses to drinking at altitude. 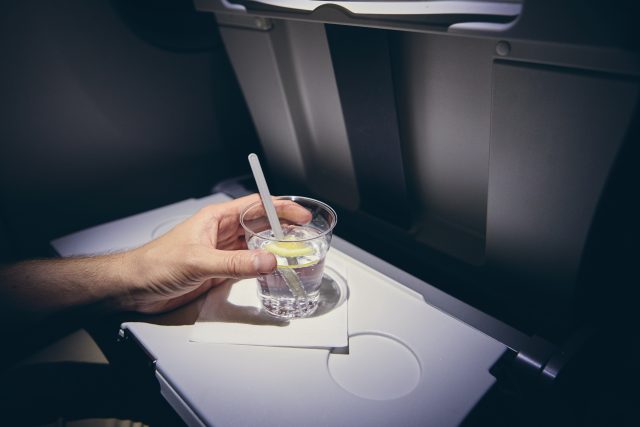 Doctors and nutritionalists are busting myths and disclosing results via HuffPost for how the human body responds to alcohol while flying, revealing some of the benefits as well as some of the negative outcomes.

For instance, some may argue that you may feel relaxed and sleepy after a glass of wine, but your sleep won’t be as restful. However the truth is now being revealed by experts who are largely looking for reactions to the negative effects of over-drinking as well as the more positive halo-effect of minimal drinking helping to reduce anxiety.

Dr Wendy Bazilian explained: “If a person is on edge due to flying in general – and doesn’t become more so with alcohol – sometimes having a beverage might relax them or make the process feel a little bit more pleasant or more ordinary.”

However, Amy Shapiro, a registered dietitian at Real Nutrition warned: “Even though you think it relaxes you, your sleep will be disrupted and you likely will not get into REM sleep, the type of sleep that is restorative.”

Bazilian pointed out that the trick is to moderate your intake as well as know that you might not get the best quality sleep if you’ve had an alcoholic drink, but it might actually help you to relax enough to nod off. She highlighted that drinking can be helpful “if in moderation … if she or he believes it helps a little to ease into sleep, then that can be fine.”

For those responsibly-drinking on flights, one flight attendant revealed the best way to get free drinks on a flight, reminding that moderate drinking as well as politeness go a long way.

Yale University School of Medicine associate professor of emergency medicine Dr Karen Jubanyik pointed out that, while flying, people may become intoxicated without even realising because “there is usually very little food available on most flights – or it is not particularly appetising – and it would be easy to drink too much on a relatively empty stomach”.

But Jubanyik also reminded that the effect of over-drinking on flights also needed to factor in how it could sometimes have a knock on effect on mood, adding: “If someone has lowered inhibitions, they may speak their mind or start a confrontation with another passenger over relatively small things, which can also land them in trouble.”

Incidents including the situations where passengers attacked flight attendents for not serving them drinks, and overt fury over pandemic safety have indirectly led to carriers like American Airlines delaying their inflight alcohol service until they felt it was prudent to reinstate it, while others, including  Southwest Airlines were criticised for making the decision to begin reserving alcohol again back in February.

Jubanyik pointed out that “progressive intoxication can lead to slurred speech, trouble with coordination and trouble walking,” suggesting that “just walking to and using the bathroom or exiting the plane could be difficult.”

Last spring, a passenger from Alaska Airlines was fined US$250,000 for behaviour he claims to not even remember.

“It can be helpful in relaxing you or easing anxiety in the beginning, and since many people are anxious flyers, this can help,” Shapiro said, reminding that there are always pros and cons.

One recommendation, she explained, involved alternating each alcoholic drink with at least one or two glasses of water. “This will help you to remain hydrated and to feel the negative effects less,” Shapiro advised.

But Bazilian observed how everyone had different consumption rates and alcohol affected different body compositions in different ways, so remaining vigilant would be key, and added: “Just be aware that one drink [on a flight] may be more than you count as one when you’re on the ground.”