Could there be method to the Masthouse grain bill?

Copper Rivet Distillery has unveiled a third expression of its Masthouse Whisky, created using a trio of grains that reflect great foresight. 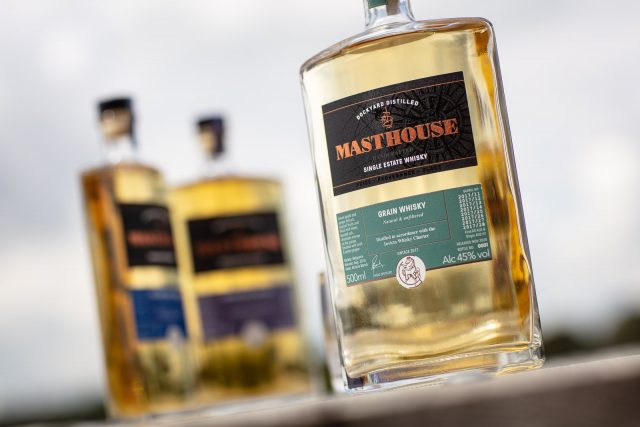 The expression, named Masthouse Grain Whisky – Pot & Column Distilled, has been created by using three different cereals in the grain recipe, resulting in both complexity of body as well as a canny way to mitigate grain shortages.

Speaking to db, Stephen Russell founder, Copper Rivet Distillery said: “Our contracted, single farm grain provenance and our long term relationship with our farming partners has always been central to how we make spirits – that, and Masthouse Grain Whisky’s multigrain mash build  – wheat, barley and rye – means that grain availability is one of the few things we don’t have to worry about in the context of rising raw material, labour, energy bills and taxes.”

The 42% ABV whisky uses not just the Belgravia barley malt, but also Claire wheat and Arantes rye – and all three grains used are grown by one farming family within 20 miles of the Kent-based distiller, mostly from the Isle of Sheppey, giving the spirit traceability and low food miles as well as additional complexity to the liquid. Other positive measures linked to this method include the fact that this also secures the distiller raw ingredients of high quality in terms of both supply and pricing, without the need to barter for grain from other climes amidst fears of price hikes and limited availability.

Russell described the new expression as a whisky that is “bursting with flavour from each of the grains with richness, nuttiness, creaminess and a touch of spice” hinting that the positive reasons for using a mixed grain bill are also in favour of the resulting product’s flavour profile.

Masthouse Grain Whisky – Pot & Column Distilled will be available direct from Copper Rivet Distillery retailing at £42 per 50cl bottle, as well as Master of Malt and The Whisky Exchange.