Fine wine prices have remained robust in the third quarter, as a combination of rising interest rates, a weaker bond market, and inflation fears have affected equities and pushed the market to new highs. 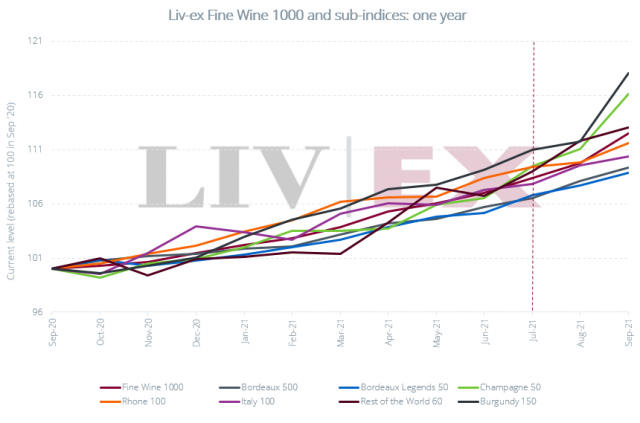 The latest quarterly report by Liv-ex reported some of its strongest gains since the previous record in June 2011, continuing the recovery from the wobble induced by the onset of the pandemic in the first half of 2020.

The report noted that “September trade [had] came roaring out of the blocks”, pushing the market to new highs and despite the new releases on La Place from both Old World and New worldd regions, “the real activity was focused on the blue-chip names from the world’s leading wine regions”.

The Fine Wine 100, which tracks the top 100 wines on the secondary market rose 7% across the third quarter (up 3.8% in September alone), with strong performances from Italy, Burgundy and Champagne, as well as “rallying” among the First Growths in recent years more than making up for ground lost after the China-driven Bordeaux bubbled popped in 2011.

Meanwhile the Liv-ex 1000 shows how collectors have switched from Burgundy to Champagne and more recently, to Italian, Californian and Rhône labels over the last ten years. Within that, the Burgundy 150 is the strongest sub-index in the year-to-date, up 16.8%, with the number of Burgundy wines in the year to date already higher than the entire  number traded in 2020.

However Bordeaux saw a small decline in its share of total trade by value in (down 1.3 percentage points to 42.1%), with Champagne’s trade share by value also dropping from 9.1% to 7.7% market share during the third quarter. However, Liv-ex pointed out that the overall picture for Champagne was more positive than this suggested, being the second best-performing subindex of the Liv-ex 1000 between July and September.

There was growth among the Bordeaux First Growths (tracked by The Fine Wine 50), up 6% over the third quarter, due to strong demand for  Château Lafite across multiple vintages. The 2018 vintage is the most traded wine to date, with the 2017 and 2015 also in demand.

September, it noted, is ‘unique’ now for being dominated by “an increasingly eclectic mix of en primeur releases via La Place in Bordeaux” – nearly 40 wines last month were released from both the Old and New World. These included Penfolds Bin 169, Yjar, Casa Real, Philipponnat’s Clos des Goisses, Daou Family Vineyards ‘Soul of a Lion’ and Castel Giocondo.