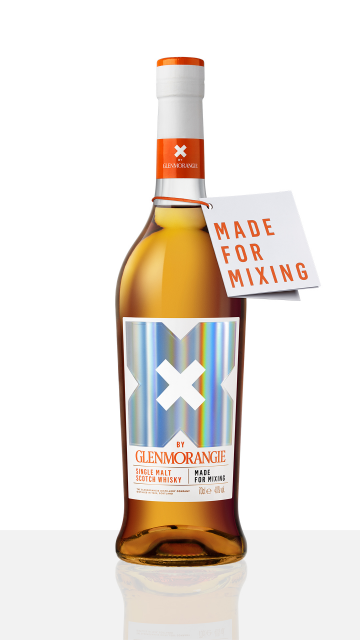 Inspired by the flavour possibilities that Glenmorangie’s whiskies can bring when mixed, the new X from Glenmorangie was crafted with input from a range of leading bartenders and has a sweeter, richer taste designed to complement tall, simple serves and cut through different mixers.

The new ‘made to mix’ malt bears the hallmark of the brand’s delicate fruity style, which is distilled in Scotland’s tallest stills before being aged in bourbon casks. It boasts luscious fruit, with pear, vanilla and honeysuckle alongside notes of orange sherbet and chocolate fudge, infused by aging the whisky in a combination of bourbon casks, with a proportion finished in new char oak casks.

Glenmorangie’s director of whisky creation Dr Bill Lumsden said X by Glenmorangie came from “our dream of creating even more flavour possibilities, with a single malt that’s made to mix.”

“Consulting with top bartenders, we crafted this sweeter, richer single malt for all those enjoying mixing at home,” he said. “Luscious with vanilla and pear, succulent orange and honeysuckle, all drizzled with chocolate fudge, X by Glenmorangie is perfect paired with a favourite mixer. So, whether you’re planning a brunch or a date night or want to experiment with your own flavour combinations, this whisky will bring your drink the x-factor”

The brand has also designed a set of simple serves inspired by familiar classics that need only a small selection of ingredients to make it easy to create drinks at home. The recipes, which can be found on its website and across its social media channels, include a classic Glenmorangie X Tonic and Glenmorangie X Cola, alongside ‘swizzle-style’ drinks – over crushed ice – for fun-filled occasions such as Glenmorangie X Brunch,  Glenmorangie X Date Night and Glenmorangie X Karaoke Party. Three serves will be highlighted on the bottle’s neck tag, with others revealed via a QR code.

X by Glenmorangie is available from Clos19.com from 21 April, and from Amazon and other whisky specialists from  1 May (RRP: £30).