Liv-ex’s main indices, the Fine Wine 100 and Fine Wine 1000 both ended the year with positive gains in December after a robust year for the secondary market. 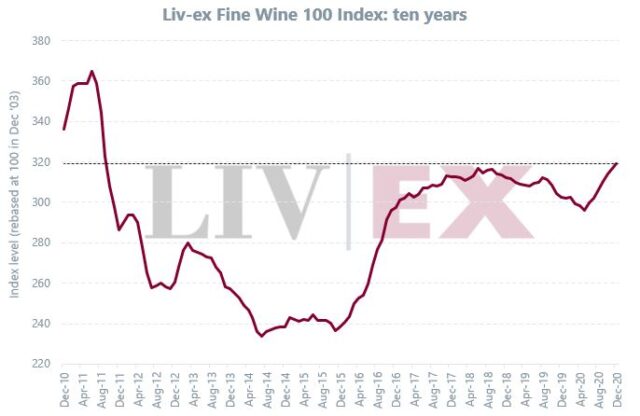 With the coming of the pandemic bringing widespread disruption, especially to the on-trade, the first half of 2020 did not bode well for the overall performance of the market.

However, from May onwards the Fine Wine 100 began to rebound and is currently at its highest point in almost a decade.

The dreaded introduction of VI-1 certificates combined with a no deal Brexit seems to have been side-stepped with the last minute deal concluded at the end of 2020, although Liv-ex said, “the effects of the increased paperwork (and the associated costs) are yet to be fully realised.”

December was the first month this year to see a decline in the number of distinct wines traded although this was put down to the reduced number of trading days rather than any particular sag in demand.

As Liv-ex also noted: “The value and volume of wines traded hit all-time highs for the month of December, suggesting demand continues to remain robust.”

Within the Fine Wine 1000, the Rest of the World sub-index posted the largest monthly gain, up 3.9%.

The Bordeaux Legends 40 and Bordeaux 500 also rose, as did the Rhone 100. After barn-storming years, the Champagne 50 and Italy 100 saw very small declines in December but both are up over 6% on the year. The Burgundy 150 also drifted.

Looking forward into 2021 Liv-ex said: “As the new year begins with many of the 2020 headwinds still in play (Brexit, US tariffs, Covid-19) the robustness of the fine wine market may well be tested, but with trade by both value and volume setting new records for December, there is little suggestion just yet, that the mood music has changed.”