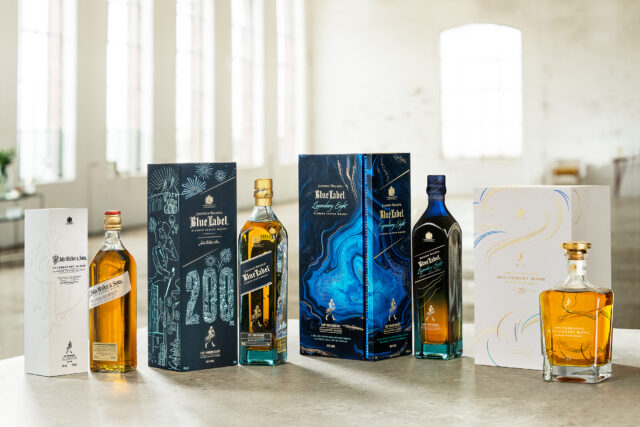 John Walker first threw open the doors to a small grocery store in Scotland in 1820, which began the journey of the brand to develop as one of the world’s leading Scotch Whiskies today.

The series of four limited editions arrives just in time for the holiday gifting season.

The Johnnie Walker Blue Label 200th Anniversary Limited Edition Design (40% abv, 750ml, SRP HK$1,465) embraces a bespoke illustration on the pack design pays homage to some of the great cities and countries that have been part of our story over the past 200 years.

Johnnie Walker Blue Label Legendary Eight (43.8% abv, 750ml, SRP HK$2,800) is crafted from only eight distilleries, that existed when John Walker started his business 200 years ago. The smooth, mellow Scotch made using some of the rarest whiskies from across Scotland, including rare whiskies from “ghost” distilleries. The eight selected expressions are from Oban, Blair Athol, Lagavulin, Teaninich, Brora, Cambus, Port Dundas and Carsebridge.

On the palate, there are “notes of stone fruits, stewing apples and cocoa emerged, followed by an embrace of sweet toffee and a soft caress of brown sugar and vanilla notes before a wave of fresh orchard fruits are enveloped by a wisp of smoke”.

John Walker & Sons Celebratory Blend (51% abv, 700ml, SRP HK$680) is made with whiskies from distilleries that were open before or during the 1860s. On the nose, this whisky has notes of sweet dried raisins, subtle spice and marzipan. The palate develops into hints of roasted nuts, icing sugar sweetness and gentle peat, with a soft pepper finish.

John Walker & Sons Bicentenary Blend (46% abv, 750ml, SRP HK$7,800), is made of rare and exceptional whiskies, all aged for at least 28 years, including whiskies from long-closed “ghost” distilleries including Pittyvaich, Cambus and the soon to be reopened Port Ellen.

In the tasting notes, there are “layers of spice reveal themselves before mingling with sweet honey and rich molasses, following with waves of sultanas, cocoa beans and herbal notes are carried on wisps of soft smoke.”

Except John Walker & Sons Bicentenary Blend which is available now, other special editions will be available in Hong Kong starting from late December 2020.