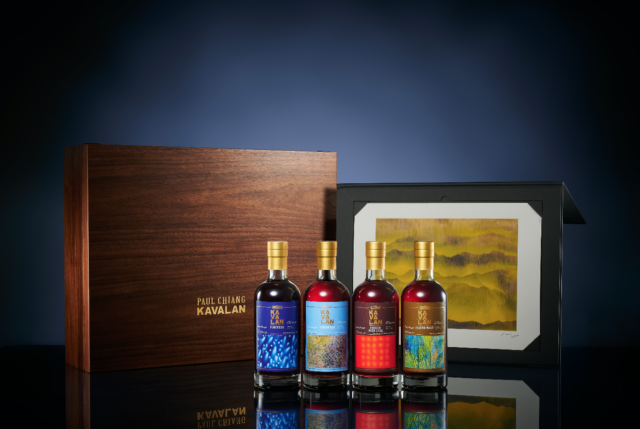 The inaugural “Artist Series” consists of four single-cask, cask-strength whisky expressions, named ‘Puncheon’, ‘Virgin Oak’, ‘French Wine Cask’, and ‘Peated Malt’. The distillery said it was inspired by the four elements, Ocean, Air, Sunlight, and Mother Earth, each of which plays an essential role in the creation of the whiskies.

The first edition introduces four bottles in collaboration with artist Paul Chiang, who draws creative energy from his homeland, and whose work was selected for interpreting classical music and the natural beauty of Taiwan.

Aged in Puncheon casks, the first whisky is smooth and filled with “roasted biscotti bathed in crème-de-pêches, smooth vanilla, sweet white peach, and maple syrup”, while the palate is, “waves of sweet toffee, white-fleshed nectarine, and tropical fruits and hints of rich nuttiness”.

The Virgin oak barrels imparts “generous tropical fruits and honey” to the second expression, with a nose of “smoked plum, purple grape, buttery vanilla, rich beeswax, wafts of crisp floral notes, apricot, and peach”, and on the palate, there is “a burst of spicy oak, sweet honey, autumn pear and chestnuts, ripened guava, and cinnamon spice”.

The red wine barrels aged whisky in the series is produced in barrels from wineries in Bordeaux. Opulent and rich, there are soft tannins and a warming mouthfeel help bring out the rich complexity of flavours, including “vibrant berry and blackcurrant, sweet pepper, apple, caramel, and ripened fruit” on the nose and “tropical fruit, wild berries, dried fruits, soft tannins, and subtle spice” on the palate.

The Peated Malt is Kavalan’s second ‘Shave, Toast, and Rechar’ (STR) whisky and follows on from the award-winning Solist Vinho Barrique expression. Using malt smoked with deep-mined peat, Kavalan’s signature tropical fruits are infused with the peated smokiness. As a result “an earthy depth and complexity is layered with fruit and accentuated by the STR technique on the barrels for a special maturation”.

“Art, like whisky, has the power to stir deep emotion. But this takes decades of hard work and commitment to mastering your craft,” YT Lee, CEO of Kavanlan said.

“Take ‘Puncheon’, which depicts the sea, sky, and stars. Paul painted this work after returning to Taiwan after 30 years, settling on the coast in Taitung. You can feel the euphoria of that time and the beauty of rediscovery.

“We want to bring together great art and our rarest whisky to connoisseurs an expression of the finest artistry. We are honoured to be collaborating with Paul on the inaugural edition.”

The distillery will release a total of 198 collector sets, which come with four 700ml bottlings. In addition, each set includes a uniquely numbered and signed edition of one of two silkscreen prints by Paul Chiang titled, “Pisilian” or “Mountain Range of Taiwan”.

Meanwhile, a total of 4,000 individual bottles will be released, bottled at 1,000ml for individual purchase.