Bacardi will expand the range of its gin brand Bombay Sapphire with the launch of four liqueurs that add a “floral or fruit boost” to a standard G&T. 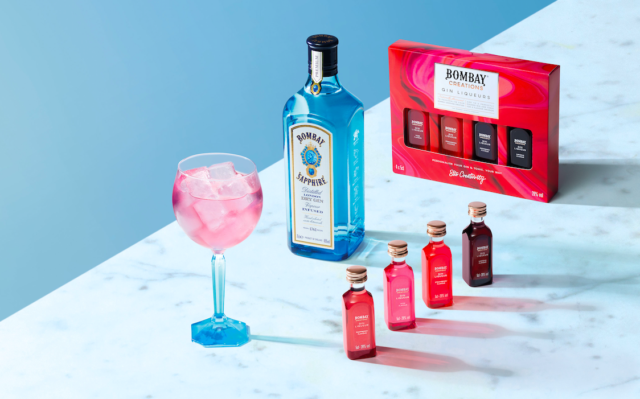 Renaud de Bosredon, Bombay Sapphire’s brand ambassador, said the pack is designed to “complement our world-famous gin, without overpowering the much-loved profile of the gin itself.

They come in four flavours – rose, hibiscus, strawberry and raspberry – and are designed to add a pink hue to a mixed drink, and carry an ABV of 20%. They will be available online from Ocado from 5 February, in-store at Sainsbury’s from 12 February, and in Tesco from March, with a recommended retail price of £12 per pack.

The new products is demonstrative of Bacardi’s attempt to cater to the “growing demand for personalisation” within the food and drinks sector, allowing consumers to “get creative by customising their G&T to discover new flavour experiences.”

Aside from timing the pink gin liqueur launch ahead of Valentine’s Day, Bombay Sapphire’s new gift pack taps into the rising demand for coloured and flavoured gin variants, just as traditional gin sales are starting to tail of in the UK.

Sales of flavoured gin in the UK contributed more than half of all the growth in the gin category during 2018, with sales netting £165 million, up an impressive 751% compared to the year before, according to figures from the Wine and Spirit Trade Association (WSTA). Despite pink gins only making up one fifth of total sales, the WSTA said in December 2018 that “flavoured gin has driven over half of all growth in gin in the last recorded 12 months”. Almost three quarters of the growth in flavoured gin can be attributed to pink gin alone.

Gin sales have skyrocketed within the past decade, with hundreds of distilleries now operating in a market that was once dominated by a handful of brands owned by spirits groups such as Diageo and William Grant & Sons.

Consumers are now moving on. Sales of gin in the UK totalled £2.5 billion in the year to June 2019, but some brands are falling out of favour. . Flavoured gin, however, continues to perform well, contributing to over 80% of the growth in gin sales in UK retail in the year to July 2019. Flavoured gin now accounts for a third of overall sales.

One company that has adapted well to new consumer tastes is VC2 Brands, the Scottish drinks maker that produces Boë Gin.

According to annual results on Companies House last year, announced a turnover of £9.9 million and £1.25 million in pre-tax profits.

Distillery director Carlo Valente said the rapid growth came as a result of the company focusing on producing liqueurs and flavoured gins that inject “vibrancy and colour” to an already crowded industry.

Bacardi is also wise to innovate with Bombay Sapphire, as it is one of the spirits group’s most influential brands in the UK. Bombay Sapphire was the second most popular brand in YouGov’s 2019 Brand Index Buzz Rankings released earlier this month, and the highest ranking gin. The scores are calculated by asking members of the public if they’ve heard anything positive or negative about 1,550 brands in the past two weeks, over the course of a year.