Château Mouton Rothschild has unveiled the label for its 2017 vintage, with a design by a French artist which will likely split opinion. 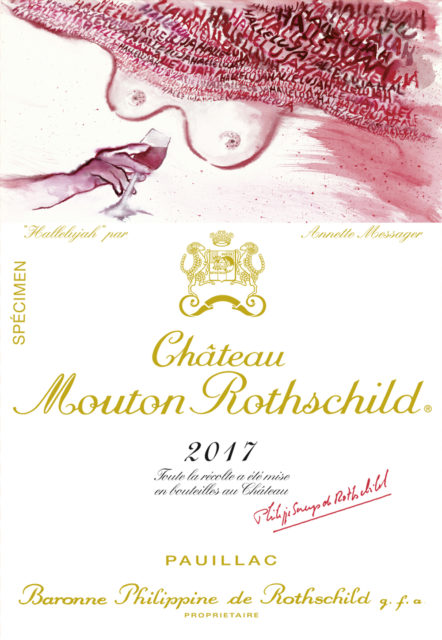 French artist Annette Messager is the artist who was invited to contribute a painting which would grace the labels for the 2017 vintage of Mouton.

Her piece is entitled ‘Hallelujah’ and bears, “the imprint of her feminist convictions” which is a running theme in her work.

The estate explained in a statement: “For Mouton, Annette Messager starts from the most literal form of drawing: writing, which is also a call, an incantation, as shown here by the repetition in successive waves of the word ‘Hallelujah’.

“To it she joins, in a manner both realistic and symbolic, the celebration of two familiar substances, milk and wine, which the Bible often associates with each other, hymning the virtues of both.”

Born in northern France in 1943, Messager has held exhibitions around the world and has won both the Golden Lion at the Venice Biennale in 2005 and the Praemium Imperiale in Japan in 2016.

She is described as being, “unafraid of either different forms or sensitive issues,” while her works, “ask questions of the world as it is, with its rules and limits, while at the same time surpassing and subverting it, joyfully and iconoclastically.”

Mouton Rothschild has invited an artists to contribute a piece to decorate its label every year since 1945 – when Philippe Jullian sketched a ‘V’ for victory to mark the end of the Second World War.

Since then some of the world’s most famous artists and even the odd amateur including film director John Huston and the Prince of Wales have designed artworks for the range.

Not every piece has been universally accepted. In 1993 the Franco-Polish artist ‘Balthus’ supplied a sketch of a nude adolescent girl.

The US Bureau of Alcohol, Tobacco and Firearms actually approved the label but a Californian group argued that it exploited adolescent sexuality and demanded its withdrawal.

Mouton asked the ATF to rescind the label and supplied blank ones for the US market, although a few hundred cases bearing the Balthus label had already been shipped and quickly became collector’s items in the states.