Archaeologists in Germany have discovered evidence of wine drinking among the Celts of the Heuneberg hillfort in the south of the country. 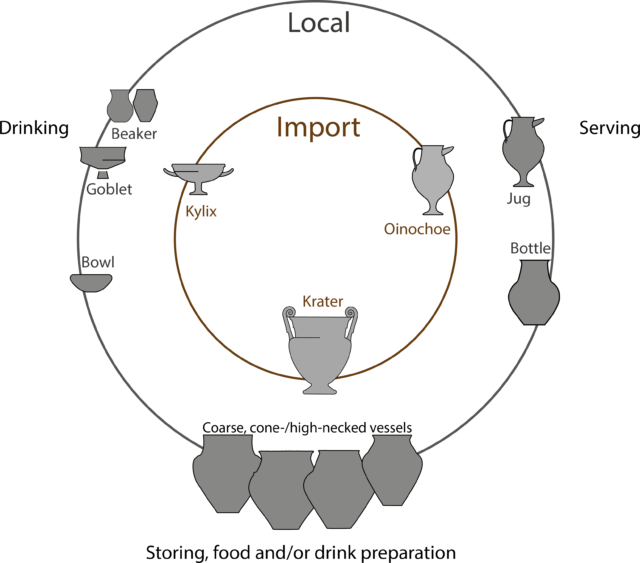 German researchers were examining both locally made and imported Greek pottery found at the Heuneberg site in the modern German state of Baden-Württemberg near Ulm.

An important Early Iron Age Celtic site from the 7th to 5th centuries BC and described by the research team as “a hallmark of early urbanisation in Central Europe”, Heuneberg’s residents – of all classes it seems – were also keen wine drinkers.

The team used methods such as gas chromatography mass spectometry to chemically analyse trace elements on 133 pieces of pottery – 126 of them locally made and seven imported from Greece.

The residue revealed their use for consumption of various food and drink as animals fats and millet were found as well as other fermented beverages not made from grapes and which pointed to consumption of drinks such as beer and mead.

Intriguingly, traces of wine were found on the oldest pieces of pottery from the time Heuneberg was still developing, which possibly suggests it was shared more widely among the population to begin with.

The later pottery by contrast showed a higher concentration of wine drinking on the higher plateau were the site’s elite resided, suggesting that as time went on wine consumption became more exclusive. This is also the time the Greek pottery, ranging from kraters to kylix, becomes more evident and wine consumption seems to shift entirely to

Tartaric acid (and other trace elements) which is a strong indicator of the presence of wine, was found in 24 vessels and due to the lack of evidence for any local production plus further trace evidence for pine resin, a known flavouring component in ancient wines, it seems probable that the Heuneberg Celts were drinking wine imported either from Greece or (potentially more likely) from the Greek colonies in southern Italy or France.

The findings neatly complement those from earlier this year at the Vix hillfort in Burgundy. Dating to exactly the same period in the Iron Age, researchers there also found evidence of wine, resin, beeswax and millet in both local and imported pottery and especially so on the higher plateau of the hillfort where the local elite resided and feasted.

Furthermore, at Vix as well as Heuneberg, there is a period when local pottery is being used for consumption of various beverages before a sole preference for using Greek ware emerges in the latter stages of the site’s use.

The latest report concluded: “Perhaps wine consumption became more conspicuous and possibly more restricted to imported and local wheel-made feasting dishes, as well as to a narrower part of the society (similar to a “diacritical feast”). This transformation could have been inspired by an increasing knowledge of Mediterranean drinking practices, hence the preferred use of imported kraters, jugs and drinking bowls, most of which have given evidence of wine.

“Certain actors within Early Celtic society seem to have managed to transform the meaning of wine by successfully limiting its consumption to certain vessels and spaces. These novel commensal practices seem to have served as a means of creating/enforcing their identities and to further establish/secure their position within society. It is most interesting to note that the findings from the Ha D2/D3-phases of the Heuneburg mirror the previous results for the contemporaneous Ha D2/D3 settlement of Vix-Mont Lassois.