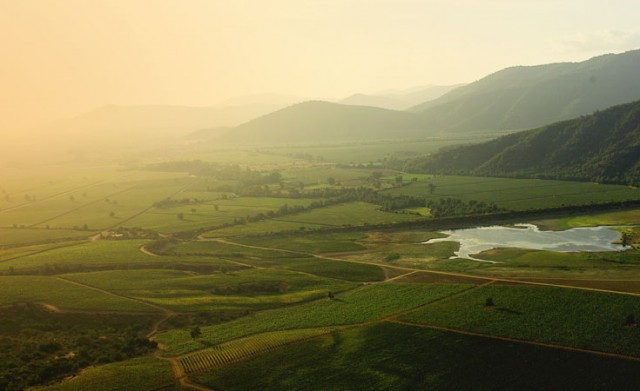 Speaking in London yesterday (14 October), Ríos singled out Casablanca and San Antonio as the future of Chile’s core Pinot Noir plantings with San Antonio perhaps being the region with the greatest potential for site specific bottlings.

Cono Sur, the world’s biggest single producer of Pinot Noir, has plantings in three parts of Chile; Casablanca and San Antonio in the north, in Colchagua a little further south – which includes Chile’s oldest block of Pinot in Chimbarongo – and Bío-Bío.

Each brings a different style of Pinot, as Ríos explained, which is then used to produce the eight expressions of Pinot Noir Cono Sur has in its range.

When it came to higher quality Pinot however, it was the unique conditions of Chile and its proximity to the influence of the Humboldt Current that made the coastal regions superior.

The moderating influence of the Current on the coast with Chile’s long sunshine hours combined to produce wines with colour, tannin and high fruit but “we never lose the acidity and freshness”, thus avoiding the jammier styles of Pinot that warm countries and regions sometimes produce – as long as the crop was picked at the right moment.

It is telling that Cono Sur’s top three Pinot expressions; a single vineyard wine from San Antonio – ‘Block 21’, the ‘20 Barrels’ and ‘Ocio’ are entirely or at least predominantly based around fruit from these two coastal areas.

Asked by host Patrick Schmitt MW if he had a preference between the two areas, Ríos replied that he thought they were “complimentary”, with Casablanca providing the “more serious… formal character” and San Antonio a little more finesse and “balance”.

Of the two, however, Ríos did tip San Antonio as the region that was “really interesting by itself because it’s the more extreme take on the area,” with vineyards at times so close to the Pacific ocean the salt spray is occasionally blown on to them and sea mists roll in and linger in the morning.

Casablanca was, of course, one of Chile’s first ‘cool climate’ areas when it plantings began in the late 1980s and early ‘90s but became somewhat overlooked as the push to the northern and southern ‘extremes’ began.

As Schmitt commented, however, with its vines now hitting their stride the quality of its fruit and its potential is attracting attention once again.

Asked if there were other up-and-coming areas where Pinot might thrive Ríos name-checked Bío-Bío but really pointed his finger at another coastal region, Limari to the north.

He said the Pinots he’d tasted from there had “more angles and minerality” which was clearly an interesting and desirable component in a blend but added that they could sometimes have “too much minerality”, so site selection was a consideration.

Finally, it was also asked if there was any plan to bottle the block at Chimbarongo as a single vineyard, given that it is Chile’s oldest Pinot Noir planting. In fact, the first ever 20 Barrels was a, at least largely, dominated by fruit from this site but Ríos said that he found it a, “simpler expression than the coastal areas”.

Although it had softness and good length it perhaps lacked the aromatics and juiciness of fruit from elsewhere and it’s worth pointing out that Pinot was only planted there in 1968 because it was, at the time, the coolest area Chile had.

Now that the coastal areas are more developed, their suitability for Pinot Noir (and other varieties) is increasingly clear and it is they that will constitute the core of Chile’s top class Pinot Noirs in the years to come.