Being carbon neutral is “just the beginning” for companies looking to up their sustainability credentials and gain a competitive edge, according to a director at the Lanchester Group, which owns Greencroft Bottling. 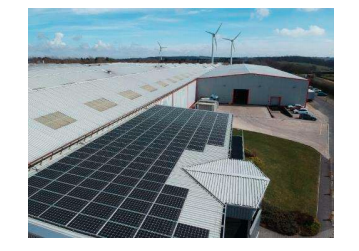 Speaking at Concha y Toro’s recent seminar on sustainability in London, Adam Black, director of energy the Lanchester Group, argued that companies needed to be creative in their approach to sustainability, and thoughtful about how they approach their commercial business, not only to be ethical, but to gain a competitive advantage.

“We are based in the North East on a windy hill, so we were able to turn that into a competitive advantage through wind power – it was a commercial move to differentiate us, but was the right commercial move for us,” he said.

As a result, the company now generates up to six million kWh of electricity per year through wind energy – more than double what it needs – feeding the excess back into the national grid.

All companies should be investing in energy saving he argued, such as investing in automatic LED lighting, high tech glass to control building heating, and keeping CO2 miles down by using local ports rather than relying on too much road freight.

He also argued that it was important for businesses to commercialise new technology being developed in research facilities and universities and adopt it for business use. He pointed to Lanchester’s adoption of pioneering open loop water source heat pump technology that have been installed in two of its warehouses in Gateshead, to take geothermal heat from disused flooded coal mines underneath the warehouse to heat the building.

The technology has been hailed as “revolutionary” for UK energy.

Looking ahead, the bottling company, which partners with Concha y Toro in the UK, is looking to commercialise pioneering energy research developed by research facilities and universities in its warehousing, as well as quadrupling its capacity with a new, purpose built bottling factory that will that will be powered by wind and solar energy.

The new facility will include around 1,000,000 Watt of solar panels generating 850,000 kWh per year, as well as the latest generation of wind turbines, and use the heat from wine to heat the building, set on a modular steel frame that uses 30% less steel than usual.

Operational from 2020, the new facility, Greencroft Two, will produce around 400 million litres of wine per year in a variety of formats, including glass, PET, bag in box and additional, more sustainable canning and sparkling wine bottling lines, he added, marking a step change for the business.