Mike James, the Aldi wine buyer credited with making the discounter a force to be reckoned with in UK wine retail, is leaving the UK to take a up a role in the global buying team, db can reveal. 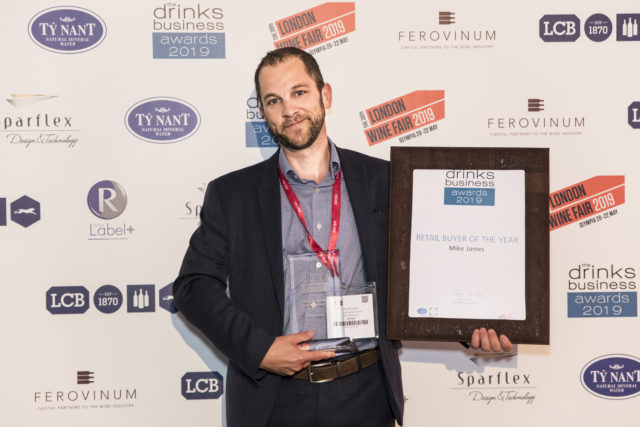 James, who this month was named as Retail Buyer of the Year in the 2019 Drinks Business Awards, confirmed to db that  he will be taking on a new global role within the business from September, which db understands will be based in Austria.

“I will be working with Aldi’s buying teams and long-standing suppliers to source great tasting wines at affordable prices for our customers worldwide,” he told db, adding that he would still be working alongside the UK buying team to ensure its customers “continue to enjoy the very best value wines, that have been bought specifically for the UK market”.

James has been credited as raising the calibre of the discounter’s wine offer, garnering a series of award and attracting the interest of media and customers,  helping Aldi to punch above it weight for its wine offer.

James joined the retailer team as a graduate trainee in 2004, after completing a doctorate in Philosophy and Ecology from the University of Nottingham, becoming an area manager of 13 stores in South Wales for six year, before being appointed to head up the wine and sparkling wine category as Buying Director.

Since 2010, he has overseen the launch of a its rolling smaller parcel Lot series, introducing wines from up-and-coming areas and testing the boundaries of what customers want, from new formats to small parcels of fine wine, to orange and organic wines or innovations such as the UK’s first Chardonnay-saké

He also oversaw the the long-anticipated launch of the online offer in January 2016, which sold 2m bottles within two years of trading, and which James said had continued to beat its own forecasts and expectations and was becoming a more mature avenue of sale, ready to stretch its  range with more higher priced wines. Last year it added a budget-friendly wedding wine service to its ecommerce offer.

Summarising the success of the range, James said the retailer liked to like to think of itself as “a bit quirky and able to push new and innovative styles and varieties out to people.”

“We’ve got the loyalty from our customers so that when it goes on sale, they trust it’s going to be a good wine for the price,” he said.

Some wines in the Exquisite range “hit a sweet spot where low price, quality and typicity meet”, The Guardian’s wine writer David Williams‘ noted in March.

The UK team will be headed up by Josh Heley, who has been with the retailer for six years, including three as a buyer, latterly in pet food, before moving to the BWS team earlier this year after completing his WSET qualifications in his spare time.  In March, db revelead Heley as one of two new members in the BWS team, alongside Andrew Clarke, who joined the retailer from from Greene King, where he was purchasing manager.