The Wine Society is trialling a series of new one-minute videos promoting its co-operative approach to sourcing wine in order to remain “relevant” to tech-savvy consumers of the Youtube generation. 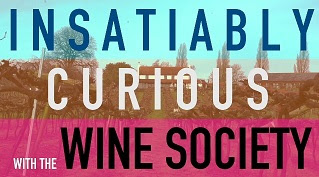 The new one-minute ‘Insatiably Curious’ videos, which were made in collaboration with local film company Standout Films, marks a change in direction for the Stevenage-based wine mutual, which is owned by its members.

The short clips are designed to tell the story of the co-operative and its approach to wine sourcing as well as celebrating its long-standing relationships with its suppliers.

“We’re unique and that message needs to come across in all that we do.” The Wine Society’s Ewan Murray told the drinks business.

“We are keen to experiment in how we get our message across.”

The Society currently has around 140,000 current active members and said it wanted to ensure it remains relevant to them as well as appealing to a wider audience.

Murray said there were plans in the pipeline for further videos focusing on its co-operative business model, and would feature spirits and beers as well as wine producers, but initially it was a trial to test the appetite for such media among the Society’s target market.

“We want these to appeal to potential members within the discerning wine drinker universe, bringing a newer and fresher approach to our co-operative story and spreading the joy of good wine, which is what The Society has been about since 1874,” he said.

“Since we posted the video across all our social media channels, the views and shares also show approval from the current membership about how we do business, as well as affirmation of their choice to buy from The Society.”

Introducing its first video from Three Choirs vineyard in Gloucestershire, the Wine Society said it had championed English wine “before most”.

“2018 is widely believed to be the best vintage ever for our home grown wines, but we’ve been following their fortunes for a long time, working with the brilliant team at Gloucestershire’s Three Choirs for more than 25 years.”

Last month the Society’s head of buying Pierre Mansour told the drinks business that the number of active, engaged members had increased by around two and a half percent. The increase in membership was one of the contributing factors behind its decision to increase the size of its warehousing facilities, along with preparing for a hard Brexit.

In a previous interview, Mansour told db attracting younger, discerning drinkers had been a key focus for the business, and a key reason for rolling out a click and collect service in April 2017, in order to provide a more “instantaneous” delivery for millennial consumers.