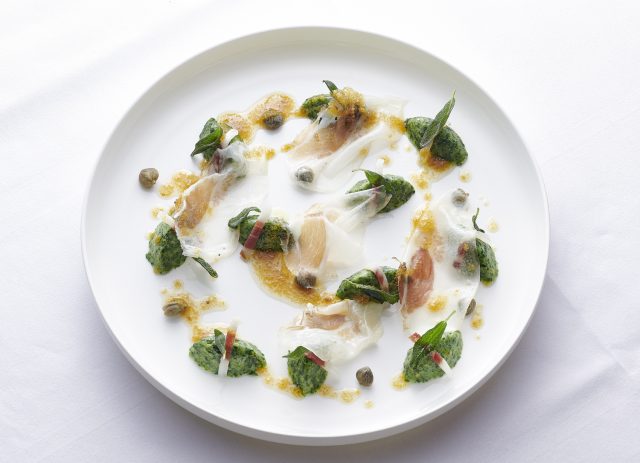 “These ten months have been intense ones for us. The Ornellaia estate has supported us 100%, and I have poured into our creation all the professional expertise I gained at Alma and in France.

“Great credit goes my team here, who have exhibited immense passion and commitment to the work we all love,” he said.

“I approach food just as I do wine, with enormous respect and a hunger to learn. Ornellaia enjoys an unmistakable bond with its growing area: a magnificent corner of Tuscany. All my dishes have this as their starting point,” he added.

Prior to Ristorante Ornellaia, D’Errico worked for five years at Maison Troisgros in Lyon under the mentorship of Michel Troisgros.

Among the dishes on his current menu are: beetroot raviolo with burrata, herring caviar and tangerine; scampi with carrots, hazelnuts and rosemary; risotto with black truffle butter; and pigeon breast with green olives and saffron chicory.

Ristorante Ornellaia opened its doors last April at Sankt Annagasse 2, near Zurich’s Bahnhofstrasse; one of the world’s most luxurious shopping streets.

The venture is a collaboration with Swiss restaurant group and Italian wine importer Bindella.

The restaurant’s interiors, designed by Swiss architect Tilla Theus, seek to evoke “the unmistakable atmosphere of Tuscany” via Tuscan fabrics and travertine stone.

Wine take centre stage at the restaurant where a selection of back vintages of Ornellaia will be on pour, including 1994, 1996 and 1999, in addition to wines from Bindella’s Vallocaia estate.