AB InBev to use 100% solar energy in UK Budweiser breweries

The beer will be produced in the UK using 100% renewable electricity after a deal was struck between AB InBev and solar energy company Lightsource BP.

AB InBev have shown it is committing to its sustainability goals, which include purchasing all electricity from renewable energy sources, after finalising a 15-year power purchase agreement with Lightsource BP, Europe’s largest solar energy company.

The deal means Lightsource BP will fund, develop and operate solar installations that will provide 100 megawatts of solar power to AB InBev breweries in the UK – enough electricity to power 18,000 homes.

The company’s two main breweries in Magor, South Wales, and Samlesbury, Lancashire, together produce more than 17 million bottles and cans of Budweiser.

It is hoped that the new solar capacity will be set up and connected to the brewery by the end of 2020.

All Budweiser brewed and sold in the UK will sport a new symbol signifying that it was made with 100% renewable electricity. This has already been employed in the US, and the company hopes it will encourage consumers to shift their choice of beverage to one brewed using a more environmentally friendly method.

The company says this symbol will be made available to other companies who can also show their commitment to sustainability. 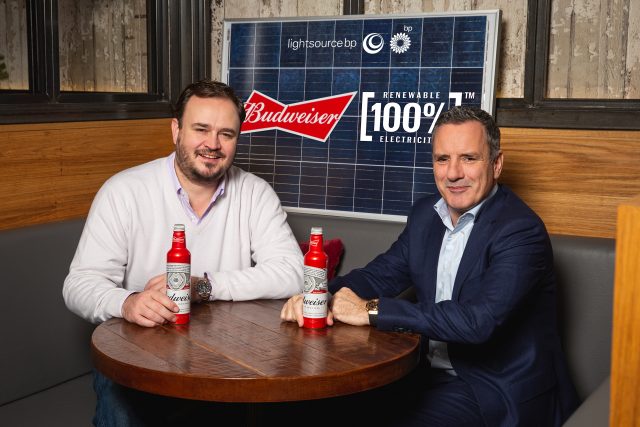 Jason Warner, zone president for Europe at AB InBev, said: “This deal is about driving positive change in what people buy.

“We want to build a movement towards celebrating and growing renewable electricity.”

Nick Boyle, Group CEO at Lightsource BP, said the partnership is “further proof that solar power can now be delivered at a cost-competitive price.

“This deal will help transform the energy mix for one of the UK’s biggest brewers, contributing to the overall share of renewables production across the UK.”

It is another step in AB InBev reaching its 2025 sustainability goals, which include a 25% reduction in its carbon emissions against a 2017 baseline, the equivalent to taking 1.5 million cars off the road every year. 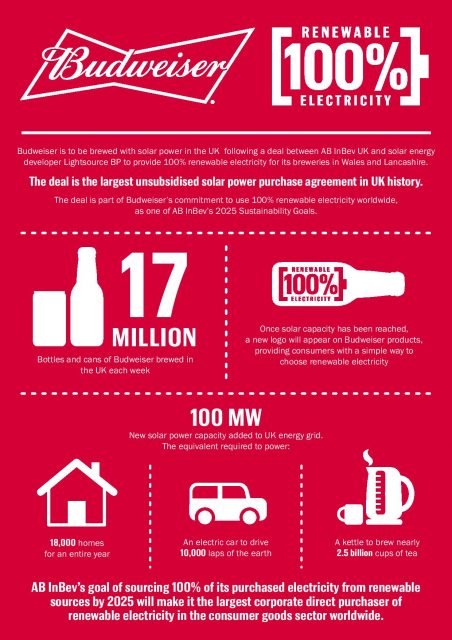