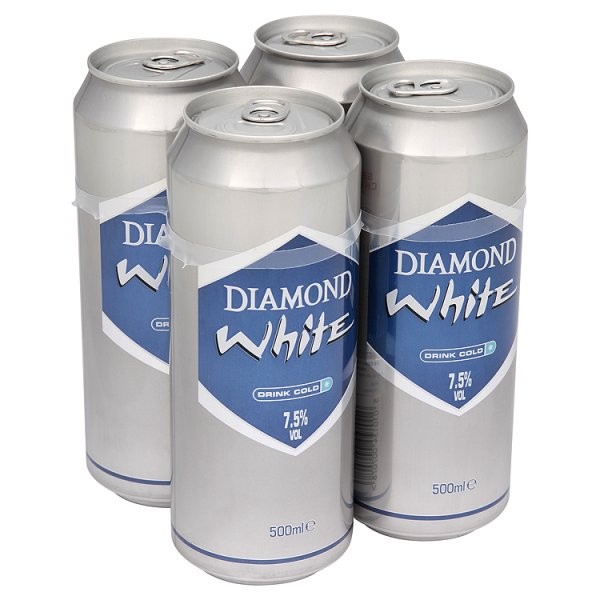 Now before we get to the fun stuff we’re going to have to talk about Minimum Unit Pricing (MUP). This week, Scotland became the first country to implement MUP to tackle binge drinking and alcohol addiction.

Suffice to say, the drinks industry has a lot to say on the matter.  While the WSTA predicts the policy will be ineffective, the IWSC had some very juicy things to say about “powerful cheap ciders and other horrible concoctions that are so obviously designed to get you drunk as quickly, cheaply and effectively as possible.”

Ok now that’s out of the way — it’s been a star-studded week in the world of drinks. 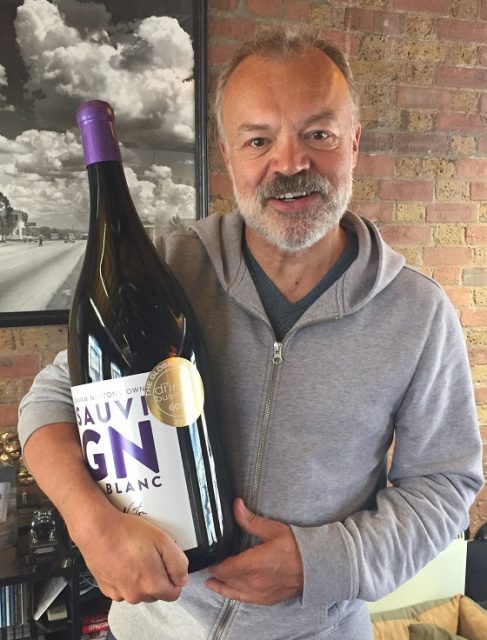 National treasure and TV personality Graham Norton loves the drinks business after his Sauvignon Blanc was awarded a gold medal at our Global Sauvignon Masters.

He and his wine team from Invivo celebrated by bottling a Methuselah (that’s six litres to you and me). Whoever gets to open that may have to write-off the weekend.

The Sauvignon Masters is judged exclusively on grape variety by a crack-team of wine experts, led by our very own editor-in-chief and resident MW Patrick Schmitt. 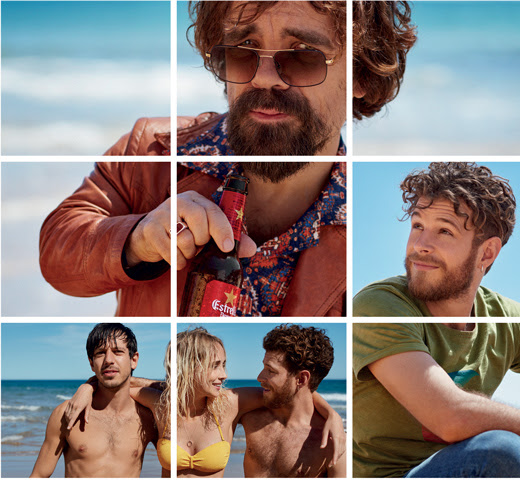 Party season is just hotting up in the capital, and as always Big Beer is ahead of the curve. Estrella got db‘s feet on the dance-floor on Wednesday with the launch of its new, feature film-style ad campaign starring Game of Thrones legend Peter Dinklage.

Set in a hip disused warehouse-turned-events-space in Hoxton Docks, the launch included canapés by Spanish specialists Jose Pizarro, Brindisa and Sabor, a live DJ set, ping pong, a private screening of the new ad, and enough beer to sink the Armada. In spite of the free-flowing booze, the author remains Estrella’s undefeated ping pong champion.

Titled La Vida Nuestra, the short film is a story of how to cut the toxic people out of your life and live to the full instead, with a smattering of product placements throughout. 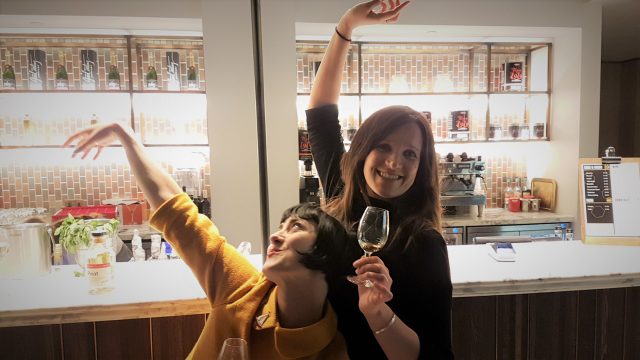 On the other side of town Katy Kennedy, brand ambassador for Elixir Distillers, presented an Elements of Islay tasting at Sony Music’s Kensington headquarters on Thursday, alongside live music from jazz singer Hailey Tuck. 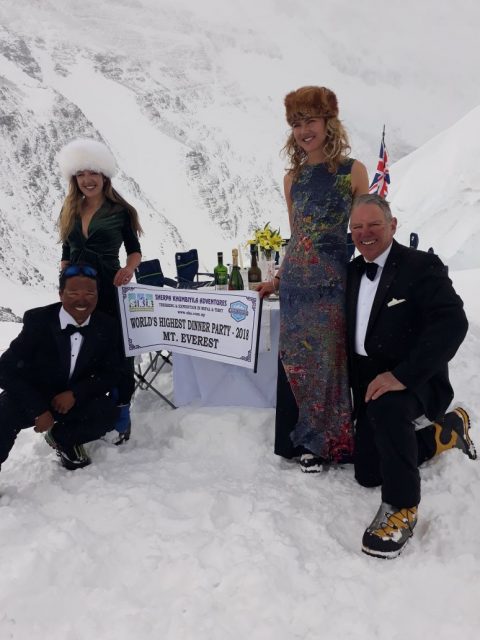 Meanwhile in the Himalayas, British adventurer Neil Laughton broke a world record on Monday to host the world’s highest black tie dinner party at the North Col, on the Tibetan side of Mount Everest. 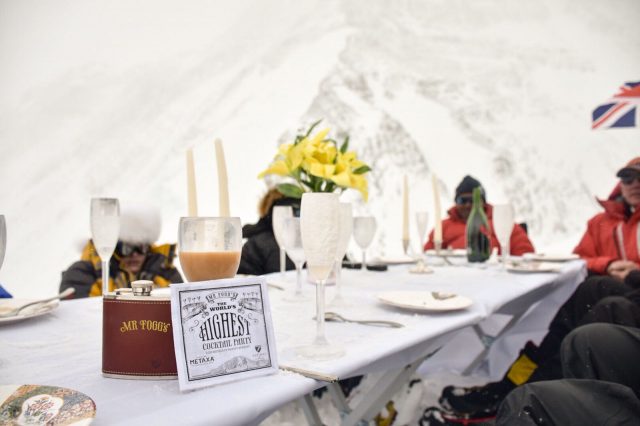 Laughton and his team climbed to Mount Everest’s North Col (7020m/23031ft), where they set up a dining table, crockery, cutlery, a flower arrangement and then cooked an exclusive high-altitude menu, designed by two Michelin-starred chef Sat Bains.

Speaking of frozen wastelands, Radisson RED opened its fifth hotel in Glasgow on Monday, with a mission statement to “inject new life into hospitality through a focus on informal services, the latest technology, and bold design.” 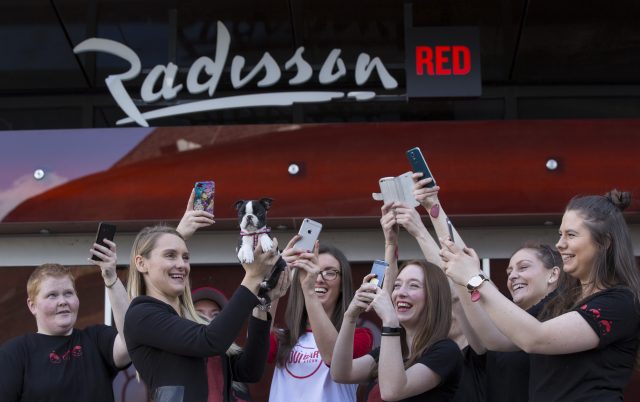 No hotel is complete without a dog, and this one (pictured) is called Baxter — an 11-week-old Boston terrier with the cutest face we’ve ever seen north of the wall. 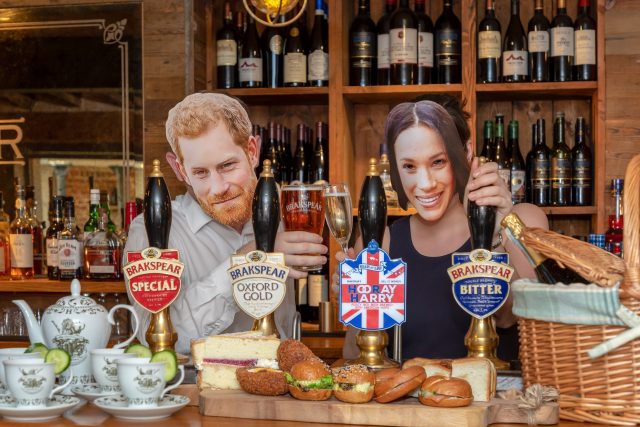 Are you a monarchist? Are you going to camp outside St George’s Chapel for four days with nothing for sustenance but Pimm’s and unwavering loyalty? Following the news that UK pubs and bars will get extended opening hours for the royal wedding on 19 May, pub chain Brakspear has launched a line of hampers filled with coronation chicken sliders, smoked cheddar sarnies, and victoria sponge cakes to see you through, available at 11 pubs across the country.

But that’s not all. If you’re in need of a shotgun wedding, Brakspear is also offering couples getting married on the same day as Prince Harry and Meghan Markle five free bottles of fizz. All you have to do is bring your marriage certificate to the pub to claim your drinks. Who said romance is dead? 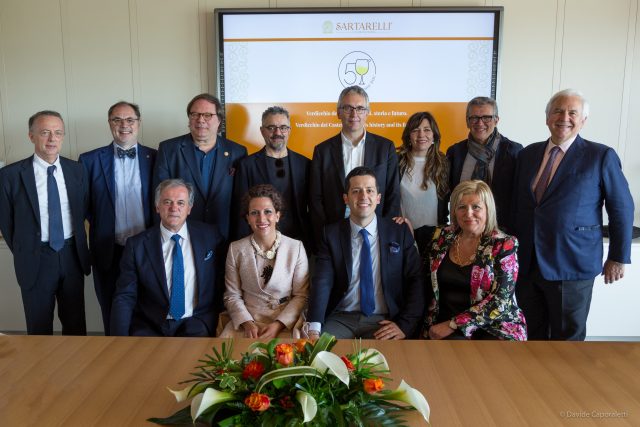 Earlier this month, vintners gathered in Italy to celebrate the 50th anniversary of the DOC of Verdicchio dei Castelli di Jesi.

Housed in Sartarelli’s at the Verdicchio Veritas Museum, guests included important people like the mayor of Poggio San Marcello, AVV. Tiziano Consoli, and the mayor of Jesi, Dott. Massimo Bacc, with a series of masterclasses and lectures offering an insight to the region.

The youngest of the Beckham clan surprised her superstar dad with the expensive gift for his 43rd birthday, with the family sharing a snap of the flash gift on Instagram.

Brooklyn Beckham later shared a picture of the family enjoying a bottle of 2014 Sassicaia.

The Beckhams are known for their love of fine wine. Last year it was reported that the pair had drank almost £2,000 worth of wine during a mid-week date night to celebrate their 18th anniversary.

J.D. Wetherspoon has set its sights on the Emerald Isle by building a new hotel in Dublin worth £16m, the largest single investment the pub chain has ever made.

The venue, which will be called Keaven’s Port Hotel, will be housed in a string of old, derelict properties in Camden Street Upper and Camden Street Lower, and will fuse “restored Georgian architecture with contemporary design,” according to the drinks giant, and is set to open in summer 2019.

Over in Celebrity Drinks Label Land, Bob Dylan launched a Tennessee whiskey called Heaven’s Door on Monday, named after his 1973 hit that was later famously covered by Guns n’ Roses in 1987.

The 76-year-old singer and Nobel laureate has teamed up with liquor entrepreneur Marc Bushala, who was also the co-founder of Kentucky Straight Bourbon “Angel’s Envy”, to release his own line of whiskies, set to be released in May. 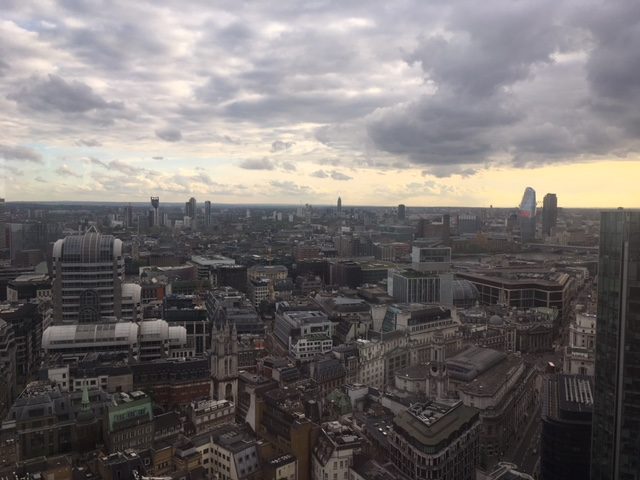 On Tuesday, db travelled east to check out Jason Atherton’s new Social 24, having renamed the bar area of his Michelin-starred City Social restaurant in the City. Having introduced a resident DJ on Thursday and Friday nights from 9pm, the team hopes to attract late night diners and drinkers to the bar, located on the 24th floor of Tower 42, with a new cocktail menu curated by group bar manager Jay Doy, based on the London skyline.

The Shard, for example, is made with Bacardi heritage, lime, watermelon, passionfruit, Skekforde rum mixer and Mojito granita, while The Thames’ meanwhile is presented in a tea glass and made with Reyka vodka, sea rosemary, watercress, apple, celery sugar, citrus and seaweed.

Don’t leave without trying the goats cheese and truffle churros, dipped in honey…. 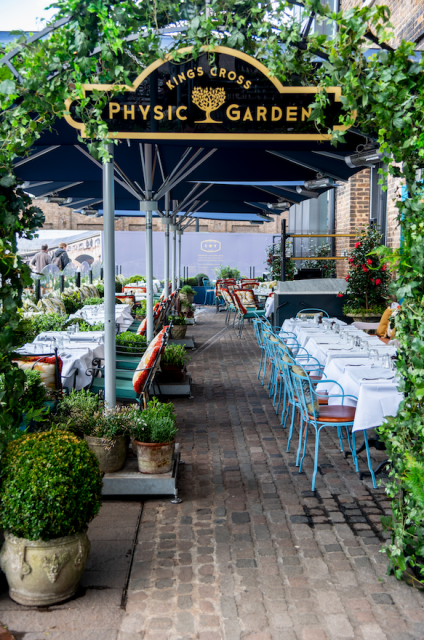 db also headed down to a preview of Granary Square Brasserie’s pop-up physic garden, created in collaboration with mixer maverick Fever-Tree. Inspired by the history of physic gardens in which herbs and botanicals were grown to produce natural remedies and medicines, the King’s Cross site has turned its terrace into a gin-fuelled apothecary. Using gins from the likes of Dodd’s, Warner Edwards, Monkey 47 and Silent Pool, the brasserie is also hosting a series of historical masterclasses, including gin blending sessions, throughout the month. 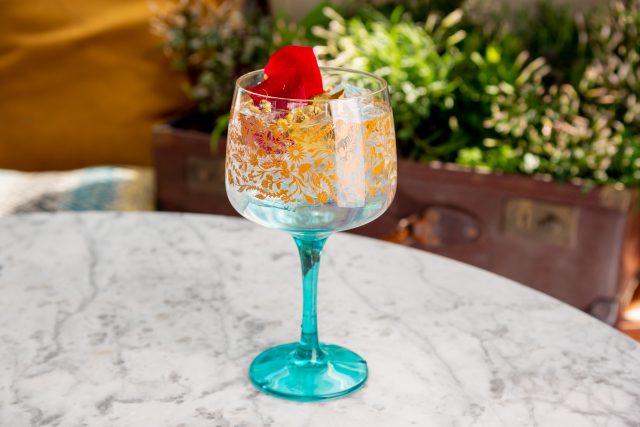 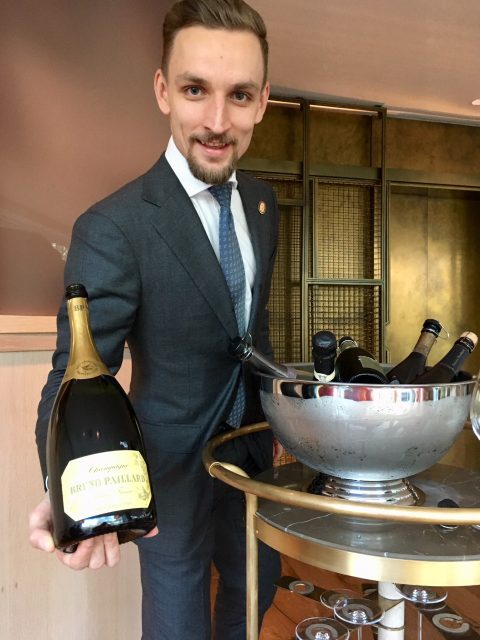 db was excited about heading to Hide this week, the ambitious new restaurant from the founder of Hedonism Wines in Mayfair. With culinary whiz Ollie Dabbous at the helm, we were in for a treat on the food front.

Before we got stuck into the tasting menu, the lovely Piotr Pietras, Hide’s head sommelier, poured us a generous glass of his house fizz, Bruno Paillard, from magnum to whet our appetites. 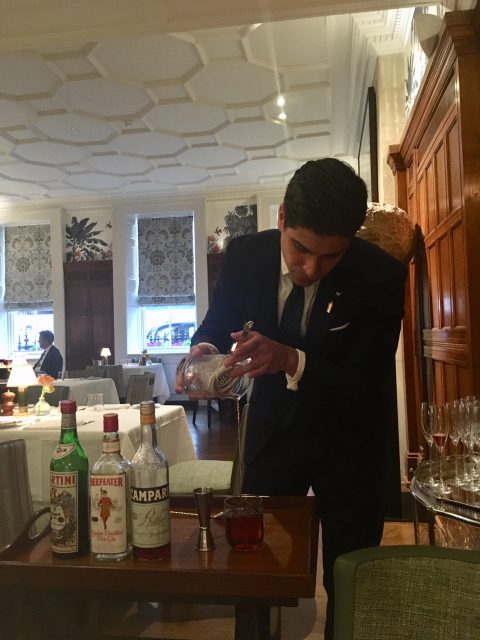 We carried on the decadence at Heinz Beck’s new restaurant at Browns Hotel in Mayfair, were we were treated to a table-side vintage Negroni made by The Donovan Bar’s dashing bartender Federico. 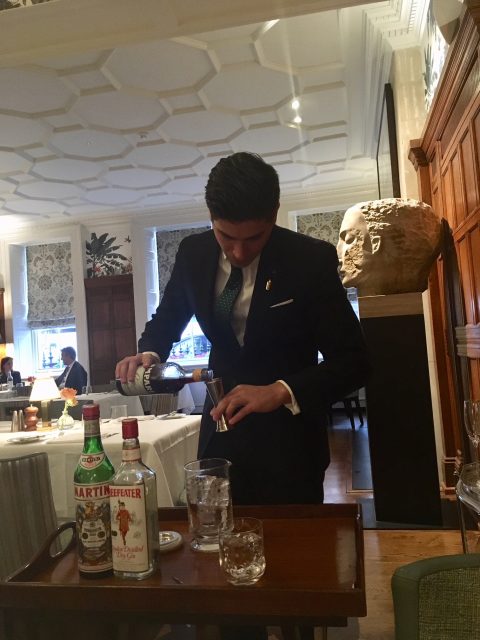 To create the sip of liquid history Federico used Campari, Martini and Beefeater gin from the ’70s.