Hollywood actress Jennifer Lawrence has launched a charity competition offering one winner the chance to be flown to California and take part in a vineyard visit and wine tasting with the star. 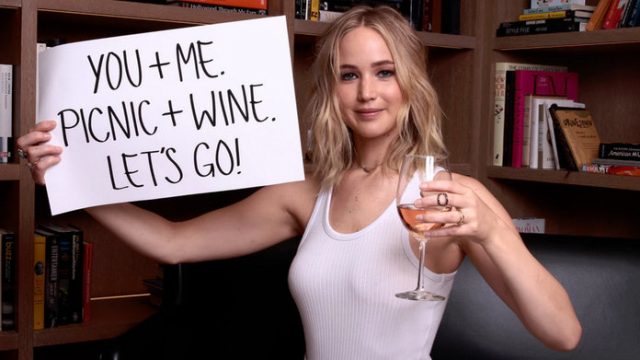 Lawrence has launched the 42-day competition in partnership with Omaze to raise money and awareness for Represent.Us – an organisation that aims to pass anti-corruption laws in local, national and state government – of which Lawrence is a board member.

“You want to help stop political corruption in America and drink a ton of wine?” she asks in a video explaining the charity competition. “I’m here to give you and a friend a chance to come wine tasting with me in California to benefit Represent.Us. It’ll be great. We’ll hang out, drink some wine, talk politics, drink wine, maybe we’ll call your ex, maybe we’ll call my ex – who knows? The point is, we’ll have fun.”

Lawrence then plays a game where she has to guess whether a quote is from a review of one of her movies or a review of a wine.

In one example she reads a comment: “Doesn’t hold up to sober scrutiny.”

“Yikes,” she says, before guessing: “Passengers?”

The winner and a friend will be put up in a 4-star hotel and will get to “picnic among the vines and play lawn games at the vineyard” with Lawrence.

“You’ll swirl, sniff, sip and spit (or not, no judgement) as you hang with Jen, joke around and become best friends,” the campaign promises.

Entry to the competition will be on the basis of a $10 donation for 100 entries, with additional perks offered, and more entries, the higher the donation.