Majestic is looking to boost its range of own-label wines to around 20% of sales as it puts a greater emphasis on its Definition and Majestic Loves ranges. 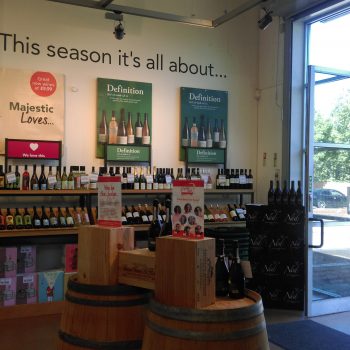 Majestic past ‘tipping point’, but profits down

Speaking to db during an exclusive store visit, Majestic’s buying and merchandising director Richard Weaver said that having established its two own-label ranges, he saw no reason why the range couldn’t be extended further.

Currently around 4% of sales were driven by own-label but Weaver said he wanted this to grow.

“Without putting a timeframe on it, I see no reason why 20% wouldn’t be achievable,” he told db, adding that the actual figure would be determined by consumer demand.

“We will continue to launch own label ranges where we have both the wine and the concepts that have consumer appeal and we will roll them out and support them,” he said. “But I don’t think we’ll be like Sainsbury’s, where around 80% of skus are own-label, “

“Our sweet spot is working with medium sized family wineries to produce scale – it has always been our heartland and will be an important part of the proposition.”

Own-label has become a bigger focus for the retailer, he admitted, in line with its strategy to find exclusive products and services to offer customers a point of difference and keep them coming back.

“In a way it was the odd thing about Majestic in that customers placed trust in us for a long time, in our people’s advice and understanding of the range but it was odd that you have that trust and you don’t capitalise on it by putting best foot forward in terms of an own label range,” he added.

As a result, Majestic’s two own-label ranges – the signature Definition range and new, entry-level Majestic Loves range – were now “front and centre” in its revamped stores.

The Definition range has performed strongly since it launched in September 2015 with twelve lines, selling more than 6 million bottles in the first 12 months with sales of around £7.5m in the last financial year.

The range is set to expand again from its current 18-strong skus with the addition of a Chenin, Viognier and Zinfandel which will go on shelf before Christmas.

The “striking” and pared back boxes of the range as it appears stacked in store was a deliberate move to keep the focus on the liquid, he said, with the ‘fun’ Majestic Loves range, which launched in April, sporting a contrasting, more colourful look.

“It’s important to remember that while we’re proud of Majestic Loves, we launched Definition first, and it is first and the most prominent, as of all the things we’re doing, it tells the story and is the flagship of the approach we have.”

“But Majestic Loves includes not only wines that you would expect in an entry-level range – a Spanish blend, an Australian Shiraz and a Montepulciano, but also some more unexpected wines, he pointed out, including a Romanian Pinot Grigio, Hungarian Grüner Veltliner and a sparkling wine from Sicily.