Lanson is to become the largest house to launch an organic Champagne when it officially unveils its Green Label later this year. 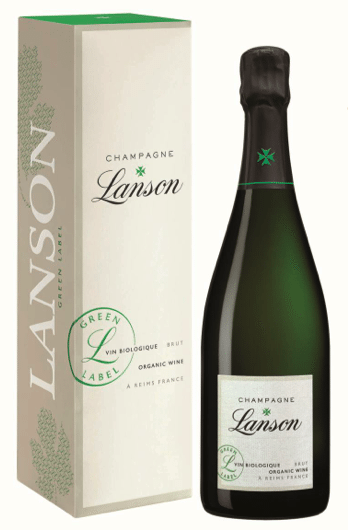 Lanson, which is currently the ninth largest Champagne brand in the world, is using certified organic grapes for a new cuvée from its own vineyards in the Marne Valley around the village of Verneuil.

As previously reported by the drinks business, these vineyards – which had been managed biodynamically – were acquired in 2010 from Leclerc Briant, having come up for sale after owner Pascal Leclerc Briant died in October of that year.

Of the 30ha of Leclerc Briant land that came on to the market – which was, at the time, the largest single biodynamic estate in Champagne – Lanson bought 13ha, Roederer 14ha, and Lanson-BCC Group CEO Bruno Paillard 2ha for himself.

Since acquiring the land, Lanson has used 8ha of the plot to produce an organic base wine, before deciding to create an organic non-vintage Champagne using the 2012 base wine – an excellent harvest in the region that produced the required quality for the Green Label, according to Paul Beavis, who is managing director for Champagne Lanson UK and international markets.

The organic Champagne is being made in the Lanson style, which means that the base wine will not undergo malolactic fermentation, and hence the decision to age the Green Label for more than three years on its lees in the Lanson cellars – the long maturation period offsets the high level of malic acid in the Champagne.

Although Lanson bought 13ha of vineyards, at the moment, the house is using just over half that amount to produce the Green Label, resulting in a production run of between 65-70,000 bottles annually, Beavis told db on Monday this week.

Beavis also said that Lanson hoped to produce the Green Label every year, depending on the harvest quality, and, despite the biodynamic history of the vineyards, he confirmed that the Champagne would remain an organic label, saying, “We are not going the biodynamic route”.

He did comment though that the Champagne may become a vintage-dated product with future releases.

The Green Label is available to order from Lanson now and comes with an RRP of £40 in the UK.

As you can see in the picture above, the Lanson Maltese Cross logo has been coloured green, as opposed to its heritage red, while the label is finished in cream, “and the packaging is recyclable”, said Beavis.

However, the largest grower of organic and biodynamic grapes in Champagne is Louis Roederer, who has 55ha out of their total 242ha holding run on organic (15ha) or biodynamic (40ha) lines.

Lanson’s Green Label will join other coloured labels in the range, including Lanson’s leading cuvée, the Brut NV ‘Black Label; its pink Champagne, the ‘Rosé Label; along with its sec Champagne, the ‘White Label’ – launched in 2013 in a white bottle – as well as the demi-sec ‘Ivory Label’, and vintage ‘Gold Label’.

Should Lanson decide to use the entire 13-hectare vineyard acquired from Leclerc Briant to produce certified organic Champagne, the Green Label would become the largest certified organic product in the region.