New York State’s oldest brewery has continued a now annual tradition of building a 26 foot Christmas tree out of beer kegs and illuminating it with 2,000 feet of lights. 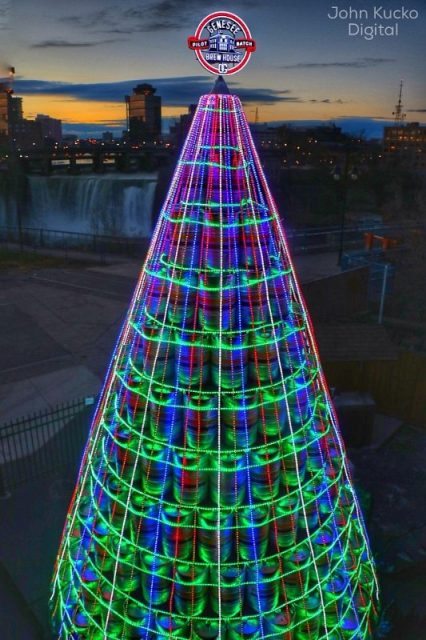 This is the third year that the Genesee Brewery has erected the spectacle using 430 kegs stacked in 11 layers to create the towering two-storey tree.

Adorned with over 2,000 feet of twinkling lights, which at times, synchronise with holiday songs, the tree is topped with a rotating Genesee Brew House Pilot Batch neon sign.

Hundreds gathered at the Genesee Brew House for the lights switch on, as well as a taste of the brewery’s limited edition Bourbon Barrel-Aged Imperial Black IPA, aged for 12 months in wet Kentucky bourbon barrels, brewed especially for the occasion.

“It started out as a fun way for the employees to get into the holiday spirit,” said Mike Gaesser, chief designer of the Genesee keg tree.

“Now, it’s become one of Genesee’s favourite rituals. We take a lot of pride in bringing the keg tree to the next level each year. It’s great to be able to bring beer and the holidays together in a fun way that everyone can appreciate.”

Established in 1878, the Genesee Brewery in Rochester, New York, recently began the first phase of a five-year plan to create an Eco-Brewery District. The first phase will include a $39 million investment to modernise the brewery and create “one of the most advanced brewing systems in the world”.