An American website that aggregates daily deals on online wine is considering international expansion after clocking up thousands of followers in its first three months. 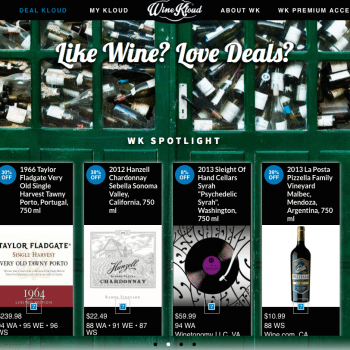 WineKloud, which soft-launched in the US in the autumn, aims to deliver a selection of daily time-sensitive deals, which can be narrowed down by users to show particular wines, vintages, country of origin, food pairing, and discount. With an average listing of around 300 daily deals, users can also create searches, or track particular wines or retailers so they are notified when deals from either becomes available. The wines themselves can then be bought direct from the retailer.

It was set up by Darian Wilson and Rich Martini, who worked for a US importer and regional distributor for more than ten years, focusing on providing opportunities to national retailers for their daily deal programs. It aims to cater for the “vast majority” of US wine drinks who like to try new wines, but aren’t sure what to drink, rather than for wine connoisseurs.

“Wine Kloud is the first site addressing this demographic in this manner,” Wilson told the drinks business. “It is our aim and intent to be the go to site for consumers to find out what deals are happening that day, regardless of where the deals are coming from. The whole point of the site is that if you don’t know about the deal, how can you buy it?”

The growth of the online US wine market has seen an explosion of retailers offering daily deals, he said, and through working with retailers the small team had gained an understanding of retailers’ roadblocks in accessing customers as well as the challenge for shoppers of sifting through countless sites to find relevant deals.

“We are just now seeing the business end [of the wine industry] ramp up and modernize with our buying culture,” he added. “So much of what consumers read in the wine press is related to the romance and quality of wine, and rightfully so – but rarely do we see much in regards to how to access wines of high calibre for a reasonable cost. Let’s face it – wine isn’t exactly an inexpensive habit.”

About 90% of the deals are free to view but the site operates a premium subscription service which highlights the biggest deals – typically with a saving of around $25 savings or greater – which Wilson is looking to grow.

The site currently covers the USA, but the team has plans to widen it to other counties, including the UK in due course, although Wilson admitted “global expansion is a little ways off.”