Provence proved that its dominance of the rosé category is not to be underrated in this year’s Rosé Masters. However, the competition still managed to throw up some pleasantly surprising entries from elsewhere. 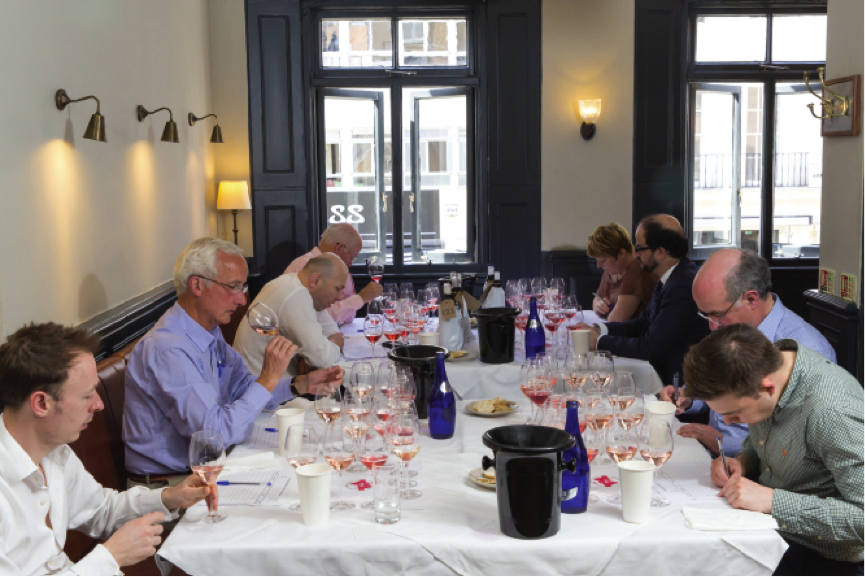 Well, if there’s one headline result that we can state at the outset, the world’s best pink wine is sparkling, and comes from Champagne. Although it wasn’t the only entry in the drinks business Rosé Masters to achieve the ultimate accolade – that of “Master” – Laurent Perrier’s Cuvée Alexandra Rosé 2004 did gain the highest marks of the entire competition. Now, for those who know this producer – which for many years has carved out a reputation for pink fizz – its position at the top of the table is perhaps no surprise. But it’s interesting to think that the creation of something age-worthy, complex, refreshing and pink is really the preserve of one place: Champagne. Having said that, there were plenty of other great rosés in this year’s competition – some with bubbles (and lees influence) but for the most part, without. And, aside from Champagne’s ability to craft magnificent pink wines, other places of note include parts of Spain, the US, Portugal, Austria, New Zealand and France – most prominently, of course, Provence. We also had a lovely entry from Greece. 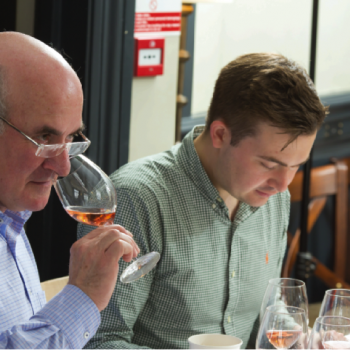 t should be said early on that tasting rosé isn’t particularly arduous – it’s tasty, refreshing, and tannin free – but it does elicit plenty of discussion. That’s partly due to the influence of colour: the judges were asked not to be prejudiced against darker rosés, since we were aware that UK trade professionals tend to favour the pale salmon pink appearance achieved most famously with the Provençal pinks. Then there’s the impact of style to consider, above all the level of sugar in the wines. Consequently, the judges were also requested not to punish sweeter styles, as long as the sugar content, whatever the level, was balanced by acidity. Finally, there’s the effect of oak, an increasingly common ingredient in upmarket pink wines, and again, the judges were asked to look upon its influence – where complementary – with an open mind. After all, there’s a growing market for rosés to pair with richer foods.

This year, overall, it was apparent that not only was the spread of colour and style broader than ever, so was the standard. There were some exceptional wines, but also some disappointments – either rosés that were jammy and confected, or prematurely tired, even browning. The odd example was also unpleasantly reductive: with a strong eggy scent indicating the presence of hydrogen sulphide. Overall, the great still rosés had lovely red-fruited scents, a lightly viscous texture, and a long, dry, fresh finish. It sounds simple, but achieving a balance of ripe fruit flavours along with palate-cleansing acidity is far from easy, and rosés that failed to score top medals were either too delicate, or sometimes, a little hard, and even herbaceous.

Provence, however, does seem to set the benchmark style and appearance in the world of top end rosés at present. Although some – notably from Spain – have retained their richer pink hues and juicier cherry fruit flavours, the majority of £10+ rosés, whether they are from Austria or Australia, appear to have tried to mimic the pale pink of Provence, and, in terms of taste, the delicate red fruits of the wines from this region. Only the very best however, had managed to capture a white floral character too.

Looking more closely at the results by category, it’s clear in sparkling rosé that price and quality were correlated in this tasting. It wasn’t until the entries slipped over the £30 mark that the judges started awarding Silvers, and of these, all were from Champagne. However, moving up into Gold, and we encountered one pleasant surprise this year: a delicious traditional method pink sparkler from New Zealand. One of the judges did detect that it might not be Champagne due to its slightly punchier fruit character and touch more alcohol, but otherwise this was a fine fizz with biscuity autolytic aromas and pristine strawberry and lemon flavours, even a touch of chalk on the finish.

Indeed, we did consider awarding the sparkling wine the top title of Master, but unfortunately, it was closely followed by the aforementioned Laurent Perrier Cuvée Alexandra, which did, quite rightly, earn the accolade of best wine of the flight – and as a result it claimed the Master. Nevertheless, for good value great pink fizz, Central Otago’s Akarua is one to watch. Another first-rate and Gold-winning example highlighted by the blind tasting was from Champagne Devaux. At £54.99, the D de Devaux rosé was more expensive than the New Zealand sparkling, but still significantly less than the Cuvée Alexandra, which retails for around £250 a bottle. 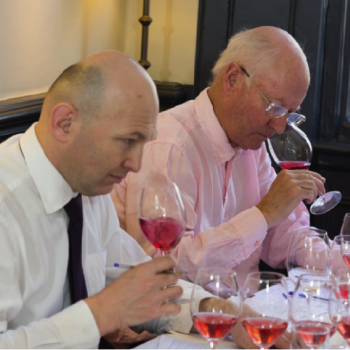 At the cheapest end of the dry still rosé spectrum were good examples from most parts of the world, particularly Spain, which, as the tasting proved, does a good job providing correct, fruity, inexpensive pink wines to the market. However, the standouts under £10 were all from Provence – Château Volterra, Domaine Longue Tubi and Barton & Guestier’s Passport – apart from one. Here again we had a pleasing surprise, as among the top of the pile in this flight was Lenz Moser’s Zweigelt Rosé from Austria. Moving up the price ladder, between £10 and £15, again Provence dominated the Silvers, although there were two excellent pink wines from Spain, one from Rioja’s Bodegas Izadi and the other from Penedes, made by famous Cava maker, Raventos I Blanc. Nestled among these was another Silver from France, but this time from Bordeaux: a memorable rosé from Château Brown, with lots of attractive raspberry fruit, as well as a slightly smoky aroma, along with a weightier texture due to four months maturation in French oak barrels.

Over £15, and the five Silvers awarded were taken up by four wines from Provence, once more highlighting this region’s ability to produce first-rate rosés, but also its strong performance at higher price points – when the judges are harsher. It was satisfying though to discover something new and high quality at this level, with a pink wine from Greece gaining a Silver. Also, this wasn’t a Provençal lookalike, but a deeply coloured pink with lots of fruit and character. Coming from Alpha Estate in the Florina region, the rosé is made with Xinomavro and Syrah in equal measure. Finally, moving up to the most expensive area of the still pink planet, we considered those few rosés sold over £20. Once again, this price category drew attention not only to Provence’s pre-eminence, but the ability of one producer: Château d’Esclans. The combination of great sites, old vines, and painstaking winemaking has made this estate the new benchmark producer of pink wines – that is, alongside Domaine Ott, which didn’t enter the tasting this year.

Notably, the tasters picked out Château d’Esclans’ new label as the best still wine of the competition. Called Rock Angel, the sub-brand comes above the producer’s entry-level Whispering Angel, but below its Les Clans and Garrus at the top. Rock Angel’s strong performance attests to the quality-price relationship of this rosé, which sells for around £20, and yet enjoys all the winemaking precision of the top labels – and, it should be noted, less of the oak influence. Indeed, moving up to this property’s most expensive expression, the scores in fact fell – the Garrus is undoubtedly an impressive wine and expensively crafted, but with 10 months in new and second-use 600 litre barrels, the oak influence was a touch dominant for some of the judges, who were also critical of its colour (it is only just pink). It should be added, however, that when it comes to expensive rosé, there are an increasing number of ambitious players, and both Famille Sumeire and Château Léoube showed their ability to rub shoulders with the best rosés in the world – watch out Ott and d’Esclans.

Looking briefly to the sweet rosés, it was telling that Spain and Portugal’s big producers – Félix Solís Avantis and Sogrape – really know how to create high quality commercial wine styles. Indeed, these two companies were the only ones to gain a Silver medal for sweet rosé under £10. Moving over £15, and this year’s tasting uncovered a lovely example that was just off-dry, containing 6g/l of residual sugar. Made by California’s Angels & Cowboys, the brand is both fun, and tasty. The wine is also pale pink, which means that consumers can appear as though they are sipping bone-dry Provençal rosé, while in fact enjoying a touch of sweetness – something more traditionally associated with Californian rosé. And with that, it should be win-win for some.

The Rosé Masters is a competition created and run by the drinks business and an extension of its successful Masters series for Champagne, Rioja and fortified wine, as well as its Global Masters series for major international grape varieties such as Chardonnay and Pinot Noir. The competition is exclusively for rosé and the entries were judged blind by a selection of highly experienced tasters using Schott Zwiesel Cru Classic White Burgundy glasses supplied by Wine Sorted. The top rosés were awarded Gold, Silver or Bronze medals according to their score, and those that stood out as being outstanding received the ultimate accolade – the title of Rosé Master. The rosés were tasted over the course of one day at the private dining room within Brasserie Blanc on Charlotte Street in London.