For those with a penchant for literature and a hankering for a Martini this collection of cocktails inspired by some world-renowned wordsmiths is a match made in heaven. 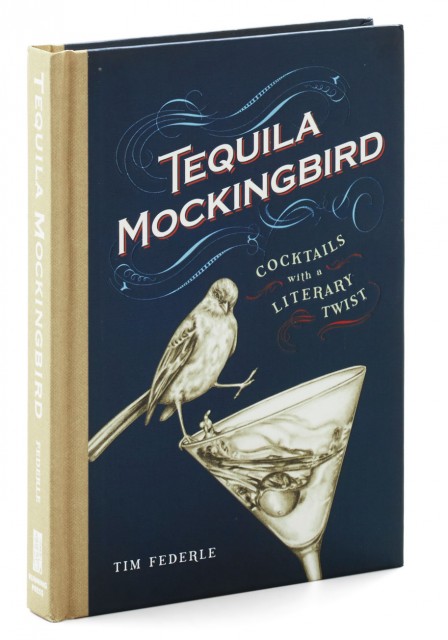 Written by Tim Federle, a broadway actor and self-confessed “word nerd and cocktail enthusiast”, Tequila Mockingbird is packed with cocktails and bar snack recipes for the literary minded, sure to make any book club gathering go with a bang.

Providing witty commentary with a touch historical enlightenment, Federle’s booze-fuelled walk through history’s most famed literary works is both humorous and refreshing, in more ways than one.

We especially like the creatively titled A Midsummer Night’s Beam – a magical mix of Bourbon, lime and soda.

Scroll through these excerpts for a glimpse into Federle’s creative cocktails inspired by literary masterpieces….

Tequila Mockingbird is available at Amazon UK and US.

One Flew Over The Cosmo’s Nest 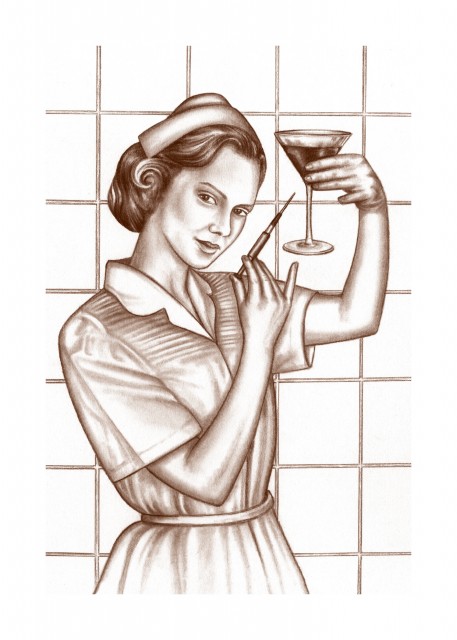 Kesey’s groundbreaking novel, written while he was a student at Stanford, was drawn from his stint as a psych ward employee – when he wasnt volunteering in LSD “trials” on the side. (The late fifties weren’t all Leave it to Beaver, gang.) Though narrated by a paranoid side-character, the hero of the story is McMurphy (Jack Nicholson in the firecracker film version), who leads his fellow mental patients in a rebellion against Nurse Ratched, a needle wielding vixen who represents tyranny of society – and seriously raises the question “who’s the real crazy here?” Liberate your own hemmed-in way with a Cosmo you’d be cuckoo to pass on.

Combine the ingredients with ice in a shaker. Shake well and strain into a chilled cocktail glass. Code blue: It’s hard to stop at just on of these – especially if all the other voices in your head are parched too. 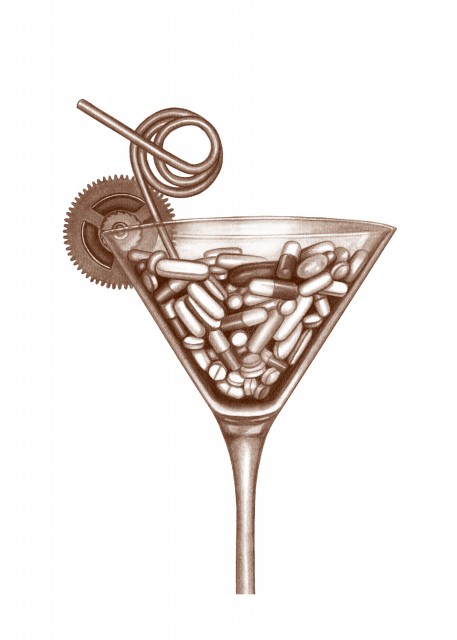 Imagine a world dominated by antidepressants and governmental control over reproductive rights. (Oh wait). Written in the thirties, Brave new World could’ve been copy and pasted from today’s headlines. Huxley penned a dystopian world in which embryos are preprogrammed for certain behaviours and needs, and technology is so revered that “oh my Ford” is a commonplace utterance. While Huxley was an outspoken fan of psychedelic drugs, you can legally freeze your own brain with a swirly smoothie featuring a surprising aphrodisiac: watermelon. Hey, what you drink (and who you drink it with) ain’t nobody’s business but your own.

Add the vodka, watermelon, lemon juice, sugar and a handful of ice to a blender, running until smooth. Pour into a cocktail glass and float the liquer on top. No matter your political leanings, one gulp of this and you’ll be more than brave enough to fight The Man.

From: A Midsummer Night’s Dream (Circa 1600) – William Shakespeare 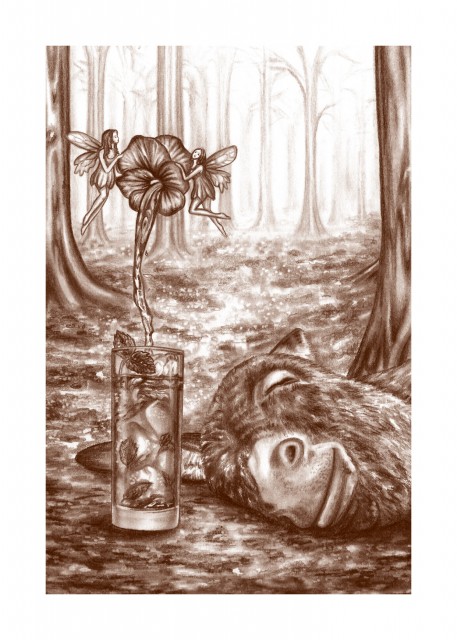 Take two parts Ren Faire and one part Greek mythology, add a liberal dash of forest-dwelling nymphs, and you’ve got Shakespeare’s whimsical meditation on love and lunacy. An amateur might toast this oft-produced play with two melatonin and a gulp of cough syrup, but Lord, only a foolish mortal would try that – this is a dream, not a blackout. You’ll want to stay upright, if drowsily so, for a light, vegetation-heavy drink that will keep you skimmin all five acts before a proper fairy-blessed slumber. You might just wake up in love.

Muddle the mint, lime juice and sugar in a highball glass. add ice and bourbon and fill to the top with the club soda. Sip to your imagination’s content 0 stopping only if you shadow begins to speak.

From: Romeo and Juliet (Circa 1599) – William Shakespeare 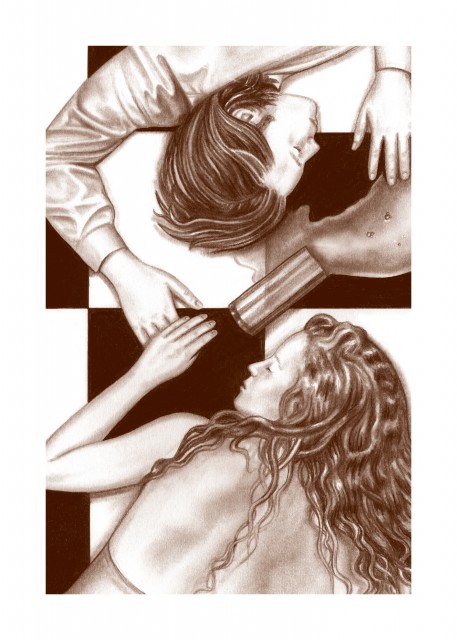 With the play’s original title sounding like Shakespearean surfer slang – The most Excellent and Lamentable Tragedy of Romeo and Juliet – this melancholy romance is for anyone who has fallen in love with the hot boy from the other side of the tracks. Who can’t relate to the star-crossed lovers, doomed from the start by parents who, like, just don’t understand? With a tragic, poisonous finale, this historic work created the mold, inspiring not only adaptations (West Side Story is just R & J with Peurto Rican accents and jazz hands), but also an entire road map for young love stories. Fall under the spell of a drink so spring-like and peach-fuzzy, you might be forgiven for not realizing its full effects.

In a highball glass, muddle the mint, sugar and schnapps until thje sugar dissolves  like a relationship over summer break. Add ice and bourbon and fill to the top with the lemon-lime soda. Prepare to fall in love – fast.

From: The Scarlet Letter (1850) – Nathaniel Hawthorne 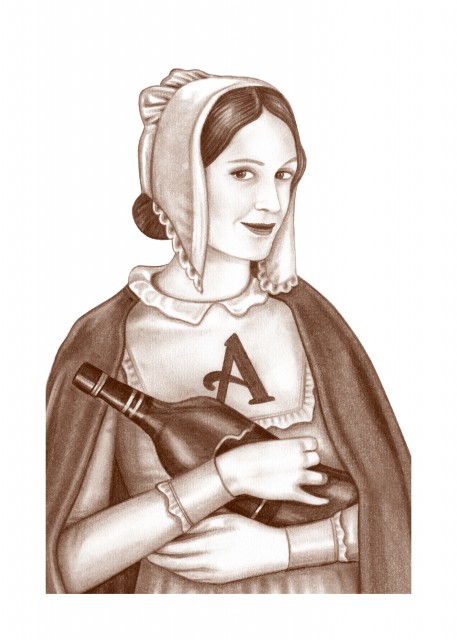 Believe it or not, kiddos, there was a time when having a child out of wedlock wouldn’t get you a reality show, but instead, a very public haranguing. In Hawthorne’s Scarlet Letter – named after the “A for adultery” badge of dishonour the leading lady has to wear after birthing a bastard – Puritan New England serves as the case study of a world at odds with religions, hypocrisy and desire. We push a drink purist’s envelop by popping a few cherries (hey now!) into a sweet and sour standby. This sidecar’s so tasty you might end up parading through the town afterward, just like the heroine herself. Have no shame: this baby’s all yours.

Rim a chilled cocktail glass in sugat and place aside. Shake the ingredients with ice and strain into the glass. You’ll give this one a grade A. 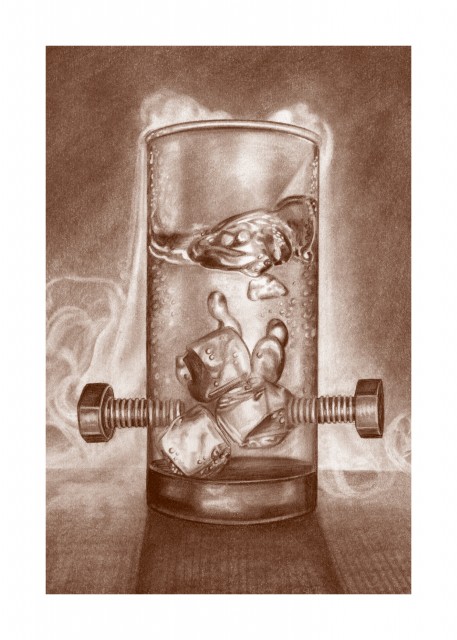 Mary Shelley created more than  a monster when she anonymously published Frankenstein at age 21 – she also birthed one of pop culture’s greatest misattributions: Frankenstein is the name of the whacko doctor, not the green-faced, peg-necked creature. (He gets his own nicknames including “vile insect” and “wretched devil”, courtesy of his dear old dad). Experiment with the following Halloween-ready, bright green concoction. Heads up: more than a few couples have played their own cerion of doctor after downing more than a few of these.

Pour the liqueur and Tequila over ice in a highball glass, then fill to the top with the club soda. Now, light a few candles, lock the door and guard your potion with monosyllabic grunts.

The Lime of the Ancient Mariner

From: The Rime of the Ancient Mariner (1798) – Samuel Taylor Coleridge 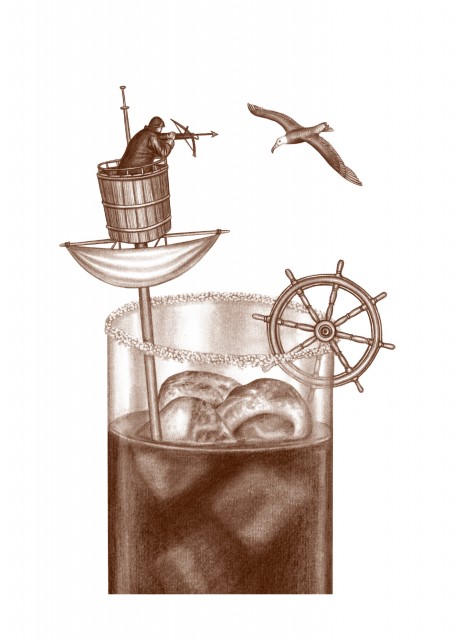 Next time you are marooned on an island, resist the temptation to call out, “Water, water everywhere, and not a drop to drink!” First of all, the other survivors don’t need a clever quote, they need cocktails and a grief counselor. Second, you’ll probably end up dying of dehydration, so your final worlds ought to be accurate. The actual phrase – “water, water everywhere, nor any drop to drink!” – is from an epic poem about bad weather, angry oceans and pissed off dead birds who aren’t afraid to haunt a hull. (Moral of the story: leave God’s creatures alone, skipper.) Celebrate your land legs with this limey twist on a salty classic – and seriously consider staying back on the beach.

Rim a chilled highball glass in sea salt. Fill the glass with ice, pour in the ingredients, and give a good stir. When you’re sobred up, matey, head back to the lookout deck – and watch out for low-flying birds.

The Lord of the Mai-Tais 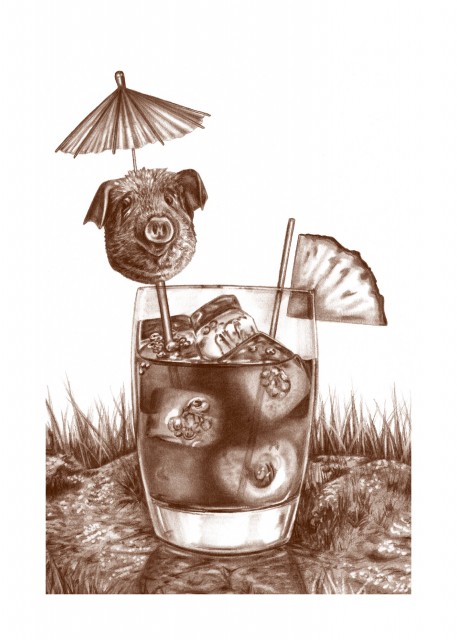 The plot that started a dozen TV franchises: throw a group of disparate souls on an island after their airplane crashes and in a Clearasil-ready twist, make sure none of them are old enough drive, let alone drink. If you went to a high school that favoured broadened minds over banned books, you’ll remember devouring this fable of order and siorder, schoolboys-turned-savages, andone very trippy pig’s head. Recommended reading during your next flight to Hawaii, escape to the galley if things get bumpy and throw together this Polynesian nerve-calmer. It’s fit to be served in a conch shell, but don’t turn your back on the other passengers.

Shake the ingredients with ice -odds are, it’ll all turn out bloody red – and pour everything, including the ice, into a Collins glass. Get creative with the tropical garnishes: pineapples, oranges, eye of piglet.

The Adventures of Sherbert Holmes 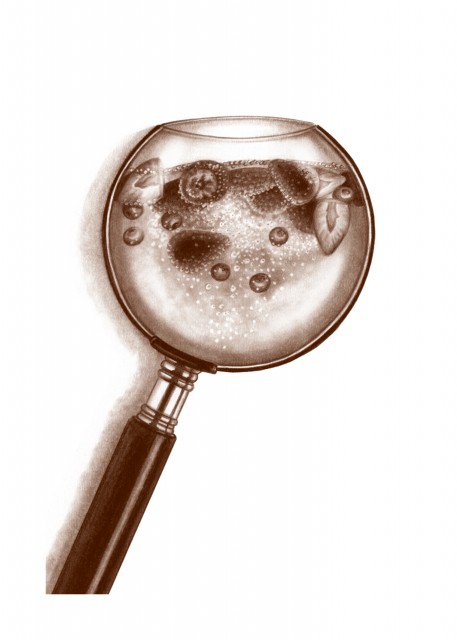 Pro-tip: “Elementary, my dear Watson” was never exactly spoken by Sherlock Holmes. Conan Doyle’s beloved sleuth appeared on the big screen saying that phrase, but not on the page; he was too busy being the only detective who could crack a case from the comfort of his arm chair. We take a tip from a lesser-known story that appeared alongside twelve others in a blazingly popular magazine series: raise a glass ti “The Blue Carbuncle.” a Holmes whodunnit involving a goose with a very expensive gem lodged very inconveniently in its neck. After you trade jewels for berries, the only remaining mystery will be why you’ve never made this party pleaser before.

Empty the sherbet into a punch bowl and pour the Champagne and ginger ale on top. Float the blueberries and serve. Don’t leave the room for long – you’ll return to a fast-empty bowl and a classic whodrunkit.

The Pitcher of Dorian Grey Goose 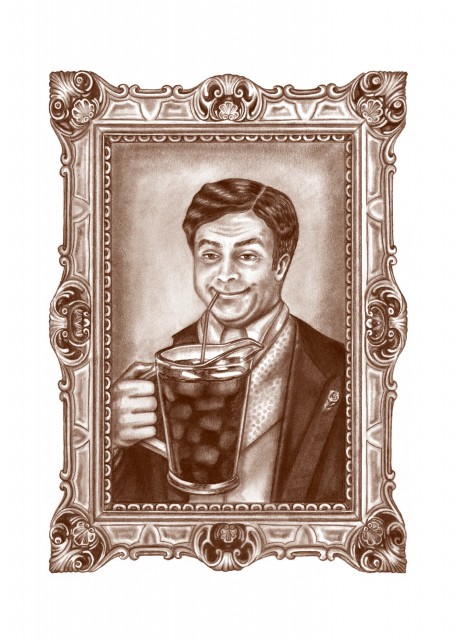 Boy, did this book have it all: knife fights, magic paintings and (spoiler alert!) people who never age. Wilde wasn’t just ahead of the cosmetic surgery boom here – he also pushed the envelope on homoeroticism, resulting in widespread censorship in later versions of the book. Try getting your hands on the juicy early copies for Dorian, and then gather a group of ageing beauty queens (or simply ageing queens), who’ll be guaranteed to love our hedonistic youth serum. Just keep them away from your expensive art.

Cucumber, sliced into wheels for garnish

Tear the mint, then place in the pitcher. Add the lemonade concentrate and stir until thawed. Pour in the vodka and three cups cold water and stir. Serve over ice, garnish with the cucumber wheels, and remember: age before beauty – if anyone will fess up.