Notting Hill’s The Ledbury has been voted London’s “ultimate” restaurant for the third year running. 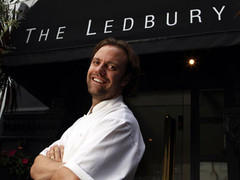 In explaining the secret to their success Ledbury head chef, Brett Graham, said: “Consistency is important to us and this award shows what a great job our team is doing here 7 days a week.”

He added: “I like to think we try our best to make people’s experience a relaxed one and not over-service them at the table.”

Second place was taken by the Ledbury’s sister restaurant, The Square, with third place awarded to Marcus at the Berkley.

Looking forward to 2015 the website behind the awards, allinlondon.co.uk, predict success for other trending London venues including the Chiltern Firehouse and Fera at Claridge’s which was recently given a glowing review by the drinks business.

The Ultimate Restaurant List 2014 collates awards and reviews to put together their list of London’s top 100 eateries.

Compiled using “a well guarded recipe of statistics” drawn from restaurant guides such as the AA and Michelin along with lists from major metropolitan newspapers including the Times and The Observer, the Ultimate Restaurant is designed to provide “one simple aggregated rating”.