Simon Rogan is arguably the most exciting chef working in the UK today and his new residency at Claridge’s marks perhaps the most important British restaurant opening of 2014. 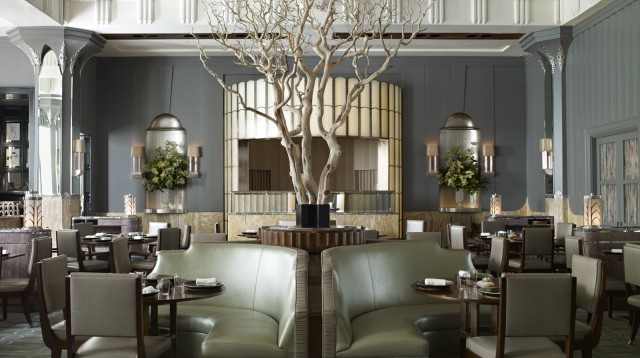 Meaning “wild” in Latin, Fera opened in early May replacing Gordon Ramsay’s eponymous restaurant after a 12-year stint. Said to be inspired by the “rhythms of nature”, Fera highlights the influence of the seasons on Rogan’s cuisine, with the majority of ingredients at his two Michelin-starred flagship, L’Enclume in Cumbria, grown either on or near Rogan’s farm in Cartmel where the restaurant is based.

This hyper local approach is less achievable in London, with Rogan relying heavily on produce from his Cumbrian farm, along with ingredients from the New Forest, Pershore and Cornwall. Sharing L’Enclume’s DNA, Rogan is keen for Fera to have its own distinct, defined identity and hopes the restaurant’s lofty setting won’t put diners off from booking a table.

In a bid to move away from the starchy atmosphere of many fine dining establishments, walnut tables remain exposed, while earthy crockery of stone and slate highlights Rogan’s desire to stay close to nature.

Interiors are warm and welcoming, with pale olive banquettes and Art Deco touches offering a dash of splendour and a sense of occasion to a space that is simultaneously inviting and intriguing.

In a pleasing continuation of the seasonal theme, the curt cocktail list has been carefully considered, using a array of ingredients from Rogan’s farm, with everything from lovage, radish shoots, ash and bee pollen making an appearance.

Sat opposite The Times’ food critic Giles Coren, kicking off a decadent four-and-a-half hour lunch, my guest and I began with a pair of parsnip and straw honey Bellinis that tasted like Christmas veg in a glass, the sweet parsnip flavour marrying seamlessly with the lightly sparkling Italian fizz in an inspired union.

Opting for the 12-course tasting menu, our feast began with a quartet of amuse bouche that offered some of the most pleasurable flavour combinations of not only the lunch, but the year.

A pea shoot wafer with fennel and edible flowers was as pretty as an Impressionist painting and crafted with equal care – Rogan and his team use more tweezers than a Basildon beauty salon.

The taste offered a snapshot of the Cumbrian countryside in spring: freshly rained on peas, gulps of country air and a symphony of green.

Cubes of saline, pearly pink mackerel with salty caviar and seawater cream evoked a bracing walk on a wind-whipped beach, while a crunchy globe of stewed rabbit propped up on a dollop of emerald green lovage was salty, rich and comforting, leaving you craving for more than the mere mouthful permitted.

Rogan deals heavily in nostalgia, but in a less deliberate way than Heston Blumenthal. A bowl of creamy mashed potato crammed with Winslade cheese and flecked with slivers of duck heart therefore was umami-rich, indecently salty and impossibly smooth – how I imagine baby food would taste in heaven.

With bread becoming an increasingly important barometer of a kitchen’s skills, a simple slice of homemade ale and rye served with an unctuous bone marrow and breadcrumb butter and a mushroom broth spoke of a simpler time.

The dish was so pleasing and wholesome; all that was missing was the Hovis boy delivering it to our table by bicycle.

Moving on to the main events, beef tartare with scallop roe and apple juice threw up one of the most successful wine matches of the meal, with head sommelier Raphaël Rodriguez pairing the dish with a 2009 extra brut grower Champagne – Fidele – from Vouette & Sorbée.

A daring pairing, the punchy acidity of the blanc de noirs perfectly complemented the acidity of the apple, its sharp citric tang offering a refreshing accompaniment to the iron-rich meat. An avid fan of the Jura, Rodriguez shines a light on the eastern French region on his wine list, where France, Italy and Spain are showed special attention and small organic and biodynamic growers reign supreme.

The prize for the most exquisite looking dish went to the Gairloch prawns crowned with a gossamer-thin blanket of lardo and adorned with lilac and yellow edible flowers, which paired perfectly with a glass of creamy and mineral-rich 2011 Savigny Les Beaune from small grower Fanny Sabre.

The only duff note of the meal came in the form of a bland hunk of brill with hogweed and beach herbs, which was slightly overcooked and uninspiring, though this was soon remedied by two slices of glistening middle white pork served with broad beens and a mead reduction, which Rogan artfully poured at our table.

He looked simultaneously wide-eyed and exhausted, as if he couldn’t quite believe that the reality of him having taken over Claridge’s had come true. The accompanying Clos Ouvert 2011 Carmenère from Chile’s Maule Valley had a pleasing, pickle brine savoury edge.

On the sweet side of the spectrum, a dessert of nitro sweet cheese with apple and sorrel reminded me of another culinary maverick to have taken up residence at Claridge’s – René Redzepi, who performed a similar trick with liquid nitrogen at his A Taste of Noma pop-up in August 2012.

Rogan has made no secret of the fact that he has three Michelin star ambitions for Fera. Reviews so far have been reverential, with one critic going so far as to say that the opening of Fera is a “dazzling confirmation of Rogan’s arrival in the international big league.”

For me, his skill lies in the ability to push flavours as far as they can go without becoming overbearing. Rogan’s dishes offer a Platonic ideal of what individual ingredients can be and how they can perform as part of a dish.

Both visually and in the mouth, they are arresting and intense expressions of themselves.

There’s a softness and a richness to a lot of the dishes that make them so satisfying and comforting, they speak to a part of our character that was formed before we could speak and seem to fulfil some unconscious need we never knew we had.

Rogan comes as close to expressing terroir in food as a chef has ever got. His dishes are a hymn to the countryside and a snapshot of how the land lived at a specific moment in time: which flowers were in bloom, which herbs were flourishing, how often it rained…

With his dishes, Rogan gets close to the alchemy of a winemaker, using ingredients as a conduit through which to express their origins, the final composition becoming far more powerful than its individual parts.

Fera is fast turning into a place of pilgrimage for curious foodies. At £85 for three courses excluding wine, it doesn’t come cheap, but the chance to sample the food of one of the world’s most exciting, innovative and clever chefs is worth the hit on your wallet. I only hope the oligarchs, celebrities and hedge funders lucky enough to eat there appreciate his skill.