Players from NFL team the Philadelphia Eagles spent a whopping US$64,055 on a night out this week, spending over $55,000 on cult Napa Cabernet and Louis XIII Cognac – or did they? 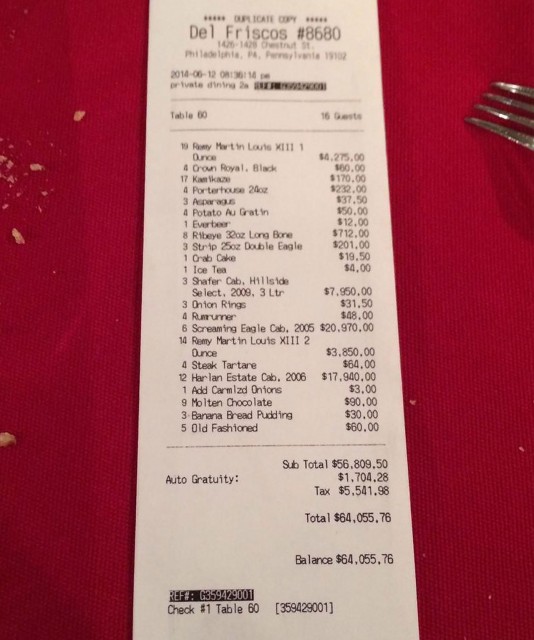 The 16 players on the team’s offensive line up were out at for dinner at Del Frisco’s Double Eagle Steak House in Philadelphia on Thursday.

A picture of the bill was posted on Twitter by Eagles’ offensive guard, Evan Mathis with the caption: “Teaching rookies a lesson” though he clarified afterwards that he and not the new players had paid.

He was referring to a meal last weekend where some of the rookies picked up a $17,000 tab at the same restaurant which also included close to $10,000 worth of wine.

However, that was dwarfed by this recent bill, as the 16 players washed down $1,000 worth of steaks with a whole case of Harlan Estate 2006, half a case of 2005 Screaming Eagle, three Jeroboams of 2009 Shafer Hillside Select, 18 glasses of Rémy Martin’s Louis XIII Cognac and a shot of Kamikaze each.

“Rookie dinners” are an old tradition in the NFL where new players, “rookies”, in their first or second years with the team pick up large dinner bills or carry older players’ pads after training.

In one notorious incident, back in 2010 then rookie Dez Bryant who plays for the Dallas Cowboys was lumbered with a $54,000 dinner bill after refusing to carry kit for other players.

However, following an unpleasant episode at the Miami Dolphins last year where rookie initiation, or hazing as its also known, caused a young player to quit the team the NFL has cracked down on such practices.

The rookies who picked up the bill last weekend stressed that it had been a voluntary decision to take out some of the veterans (including Mathis) and Mathis said he paid for the latest bill.

Seen in this light his “teaching the rookies a lesson” quip is more likely meant as, “showing them how it’s really done”. 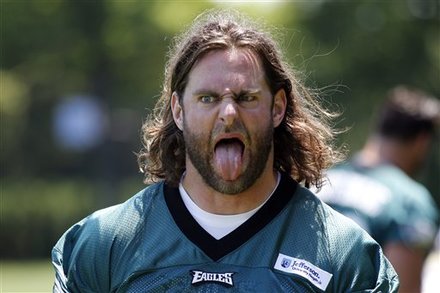 However, there is one final twist. Mathis (pictured above) is known as being something of a practical joker and one sports writer in the US who called up Del Frisco’s to ask about the bill was told that the Eagles were never there at all on Thursday night.