Top 10 beers in the press 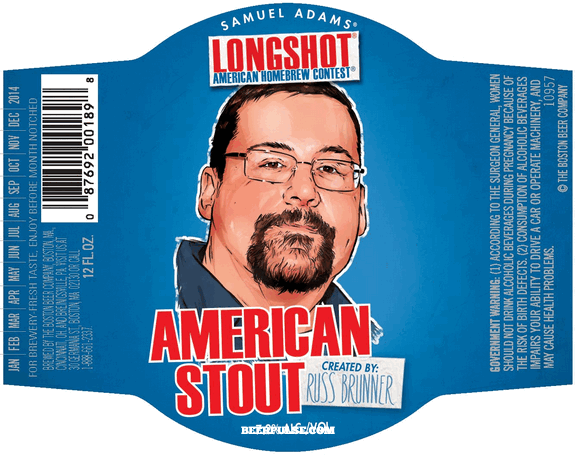 ‘Pairing: Brunner’s American Stout has an earthy, piney note from its hops that pairs nicely with rosemary. Try it with a roasted chicken club sandwich with rosemary aioli.”

Chris Morris, writing at New Jersey’s nj.com, picked Elysian’s Loser pale ale as his beer of the week, which he described as having a “touch of spiciness.”

“Brewed with Pale, Munich, and Crystal malts and hopped with Sorachi Ace and Crystal hops, Loser is light, citrusy pale ale with a crisp finish. Loser pours a somewhat cloudy, deep golden color with a huge, fluffy white head. Retention is good, lacing is better. The nose as a slight sweetness from the malts, which pairs nicely with a slight citrus from the late Crystal hops. A touch of spiciness malt also come through from the Sorachi Ace hops, though its very faint.

“The taste has a toastier malt flavor from the Munich malts, but stays light and crisp. Similar citrus notes come from the hops, with a definite lemon from the Sorachi Ace. Overall, the 7% ABV is completely hidden. As for mouthfeel, it’s a medium-light body with medium carbonation and a crisp, dry finish. They claim this beer has 53 IBUs, but I’m not buying it. There’s a good hop to it, mostly in the form of citrus, but the drinkability is incredibly high, especially for the ABV. Either way, well done Elysian. Cheers!” 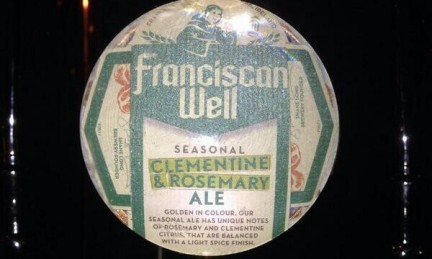 She said: “Saison beer can still be quite different from each other today, but what they usually have in common is the Belgian style cloudiness, the addition of herbs and/or fruits, and a not-too-sweet, refreshing taste that makes them perfect for the summer. There aren’t many Saisons brewed in Ireland, but there is one that is so good that everyone needs to know about it.

She added: “The Saison pours a hazy golden colour with a foamy white head. In the aroma, you can definitely smell the rosemary, and you get oranges, too. The taste is extremely refreshing with a lovely hint of the clementines. There are notes of lemons and ginger as well, together with a slight taste of cloves that is typical for Belgian beers. It is fruity and at the same time the rosemary adds a delicious zingy note. It is so refreshing and light that you want to keep drinking more and more of it. You’d never guess that there’s 7% of alcohol hidden in there somewhere. Another dangerously drinkable and delicious beer.” 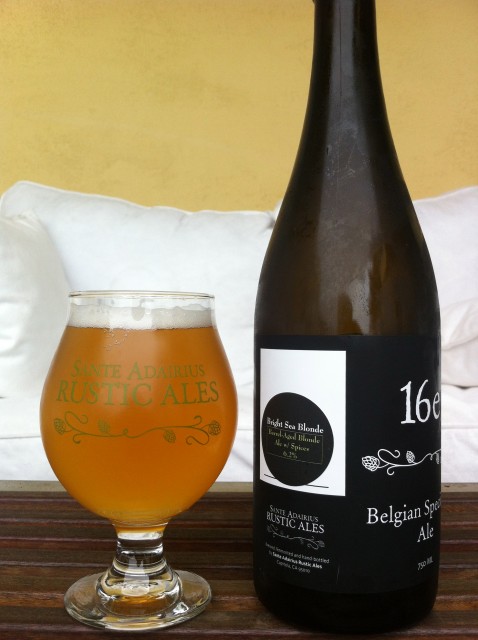 He said: “Bright Sea is a lightly soured, barrel aged, Belgian blonde ale. Plain and simple: it’s tart, juicy, pleasantly aromatic, easy on the tongue, and gorgeous to look at. Nay a flaw to be found either. The key to this being so goddamn drinkable is, I think, the gentle sourness and the mild carbonation. The combination adds some nice, light acidity, which masks any heaviness you might mind in the common unfiltered Belgian blonde. It’s just flipping fantastic.”

The Kimmie, the Yink and the Holy Gose, Anderson Valley Brewing, Boonville, California, US 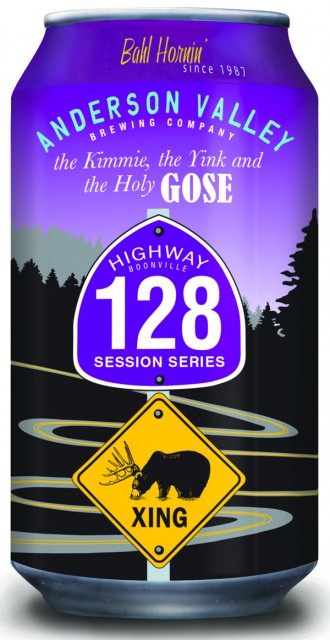 Anderson Valley Brewing were commended for their delightfully named gose-style beer, “The Kimmie, the Yink and the Holy Gose” by Jay Brooks, writing in the Contra Costa Times this week with flavours of “guava and peach”.

He said: “A fairly old style, gose beer is sour and — surprisingly — salty. It’s traditionally made with a mix of barley and 50% or more wheat. It’s brewed with both yeast and lactobacillus (lactic bacteria), along with coriander and, traditionally, the brewing water is also lightly salted. It’s thought to have originated in Saxony, near the German city of Leipzig. The German Beer Institute describes gose as having “a medium, pétillant effervescence” with a mild, subdued nose, no hops notes and “an almost sour spiciness overlaid by a complex array of banana, green apple, dried apricot, zest and coriander. … The brew’s unique saline characteristics are particularly prominent in the dry finish.”

He added: “Brewmaster Fal Allen was happy to regale me with the tale of the brew’s inspiration and origin. Allen was actually trying to make a sour mash beer, but because you leave the mash out overnight, it’s hard to control and get consistent results. Looking for an alternative, Allen’s team read about gose and decided to try making a kettle sour version. After they mashed off at 175 degrees, effectively sterilizing it, they covered the mixture with a blanket of inert argon gas and let it cool. They pitched the lactobacillus so they could better control the sourness, waited until it reached the right pH, then boiled it — and, he says, “Boom, you’re done.” 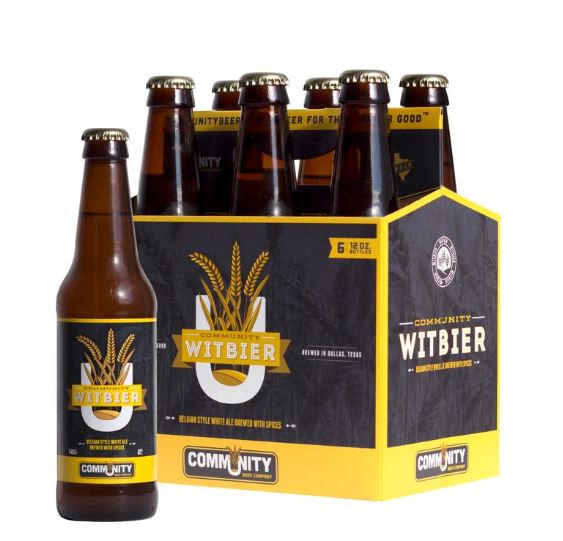 Tina Danze, writing for Dallas News, picked Dallas-brewed Community Witbier as her “Beer Buzz” this week, which pays homage to revivalist of witbier with its own Belgian recipe.

She said: “This spicy witbier is the brewery’s homage to the late Pierre Celis, the Belgian brewer who revived the witbier style. It has a bread and faint spice aroma and a yeasty, predominantly wheat flavor sparked with lots of coriander and pepper. Citrus and orange rind notes lend a slight tang. It’s an easy-drinking, refreshing beer with a light body and an alcohol content of 5.2%. It’s a good choice for summer sipping.

“Serve it: Serve chilled, in a tall glass. To appreciate the beer’s flavors, resist the urge to add an orange slice, as some commercial white ale brewers suggest.”

Jason Baldacci, writing at The Chicagoist, recommended this “hop-driven” wheat beer from the 4 Hands Brewing Co., made with fresh orange zest.

He said: “It pours a fiery orange color in the glass and the aroma pops profoundly with big notes of pine and navel orange. On the palate, the citrus kicks in right up front, but the hops dominate the mid-palate and ride high through the finish. The overall hop profile is incredibly earthy and herbal, with just enough citrus to help bring the fresh orange zest into play. The wheat in the grain bill keeps the body relatively creamy and light, while adding just a touch of malty sweetness to balance the hop bitterness. At 5% abv, Contact High is a dream for any hop lover who’s looking for a new warm weather beer.

“Pairing hop-forward beers with food is always a challenge, but we feel there are some good possibilities with Contact High when you lean on some of the other things happening in the beer’s flavor profile. You could do very well with spicy food, whether it’s Thai noodles or chicken wings. You could also step up your poultry game with some sort of roasted bird, but make sure to put some emphasis on herbs to play off of the hop profile, and don’t use any sauce that’s too rich. This would be wonderful with tacos, especially if they come with a spicy, fruit salsa.”

Michael Bates, writing for the UK’s York Press, described Victory Brewing’s Prima Pills as a having and aroma of “quince jelly, sweet and nutty, with a touch of cracked black pepper and cut grass”.

He said: “There’s that switch every beer lover makes – they go from thinking that all proper beer is brown, twiggy bitters or stout, to drinking almost exclusively micro-brewed and regional beers. This is a wonderful thing – it’s the equivalent of eating potatoes all your life, then walking into a greengrocer’s, you should do it if you haven’t already. The only downside to it is that quite often we’ll find a customer who’ll refuse to return to lager, even a fine Czech pilsner, having made the leap, assuming the swill they used to drink is actually representative of the style. It isn’t, and Victory’s Prima Pils proves that lagers can be just as exciting as any other style, in the right hands.

“Pouring a hazy lemon yellow with a short-lived, loose head, the aroma is quince jelly, sweet and nutty, with a touch of cracked black pepper and cut grass in there for good measure. The flavour is slightly sweet, with light toffee notes, giving way to a precise, robust bitterness; crisp and clean, lemon zest and grapefruit vie with cedar and petrichor for the palate’s attention. The finish is dry, refreshing, and clean, backed by lemon pith bitterness. All this coming exclusively from German and Czech hops. Victory have done it by the book, and done it exceedingly well. So give lager another shot, provided it’s the right sort of course.” 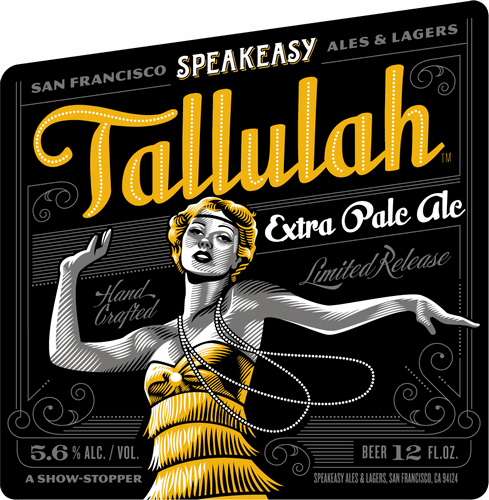 Bonnie Horgos, writing for the Santa Cruz Sentinel, tucked into a six-pack of Speakeasy’s Tallulah pale ale this week, calling it “sweet and citrusy”.

She said: “For the record, I’m a huge advocate of drinking a beer (or two) as part of post-workout recovery. Yesterday evening, I came home after a long and grueling workout, and forgot a guest had left me a six-pack of Speakeasy’s Tallulah Extra Pale Ale. Needless to say, I cracked one of those bad boys open, sipped on that smooth, citrusy brew and never felt better.

“An American pale ale with a sweet, citrusy characteristic with notes of pine that finishes with a crisp hoppiness.

“Pair with: I know you’re thinking, ‘Really, Bonnie? Extra Pale Ale?’ Let me tell you, though, this Tallulah has some bite. I’m thinking a plate of stinky cheese ought to do the trick.” 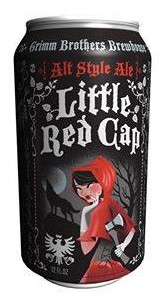 She said: “The Little Red Cap’s aroma is complex—chocolate biscuit nuances meet bitterness from both German and American hops—and its flavor is rich with toasty, caramel notes. It is a full-bodied, yet clean-tasting brew with a smooth mouthfeel and dry finish. Little Red Cap embodies the traditional style from which it, along with the rest of Grimm’s lineup of German-style lagers and ales, was inspired. “Dusseldorf and the region of Germany that the altbier originates has one of the oldest brewing traditions in the world with archaeological evidence of commercial brewing dating back to Roman times,” says vice president of sales and marketing Russell Fruits. “Dusseldorf today boasts one of the densest brewery and bar districts in the world.”

“One year after Grimm Bros. was founded in Loveland, Colorado, the brewery took home a gold medal in 2011 from the Great American Beer Festival in the German-style altbier category for Little Red Cap (named after the alluring, copper-colored headwear of Little Red Riding Hood). The beer would go on to win a bronze in the same category in 2012. Now, you can sip on this award-winning altbier at home the next time you need a little help getting rid of the day’s big bad wolves.”