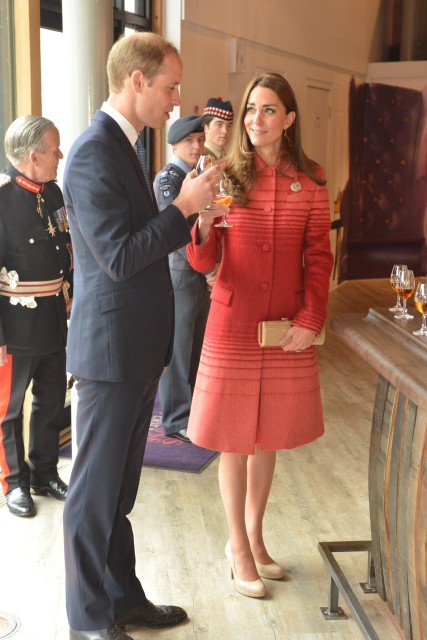 The Duke and Duchess of Cambridge sampled some Scotch whisky on Thursday while at the official re-opening of the Glenturret Distillery – Scotland’s oldest whisky distillery and home to The Famous Grouse Experience – following a £250,000 refurbishment. 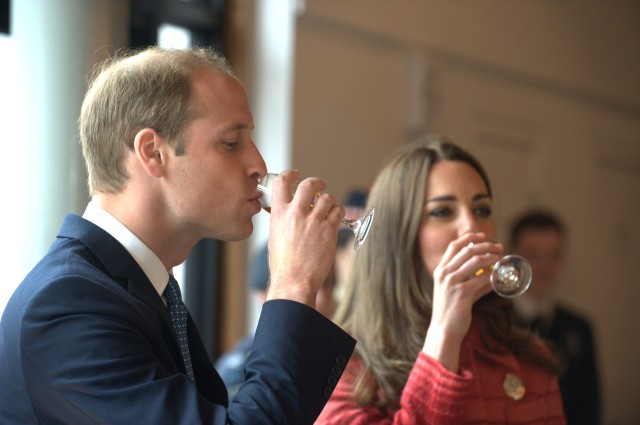 The Earl and Countess of Strathearn, as they are known in Scotland, enjoyed a private tour of the distillery and tasting of The Famous Grouse range and shown how a single malt is made in the traditional way by Stillman, Ian Renwick, before enjoying a Civic Reception hosted by the Provost of Perth and Kinross, Liz Grant. 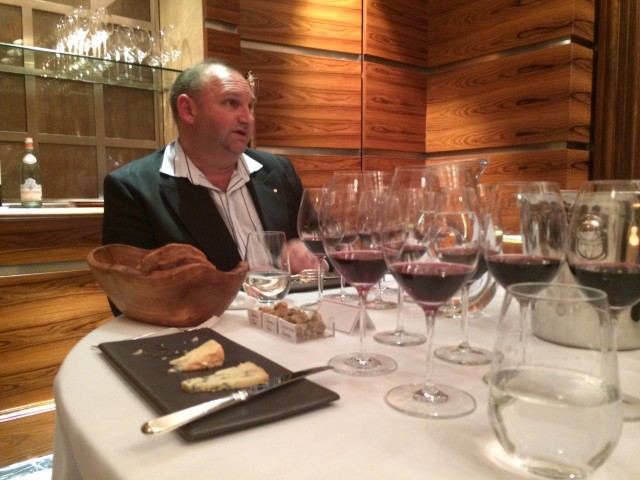 Kleine Zalze’s chief winemaker Johan Joubert hosted a dinner in London, which culminated with some of the South African producer’s more recent innovations such as Sangiovese, Malbec and a Methode Cap Classique. 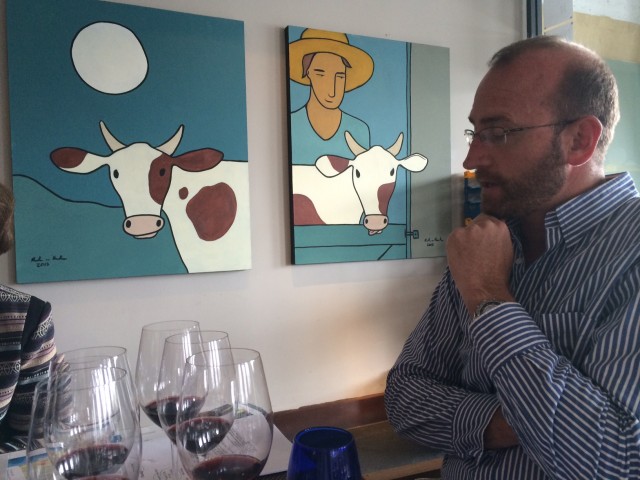 Sumaridge Wines’ winemaker and director Gavin Patterson tries not to be put off his stride by these staring cattle on the wall of London restaurant High Timber as he showed off a number of top Pinotage examples that are helping to rehabilitate this South African variety’s mixed reputation. 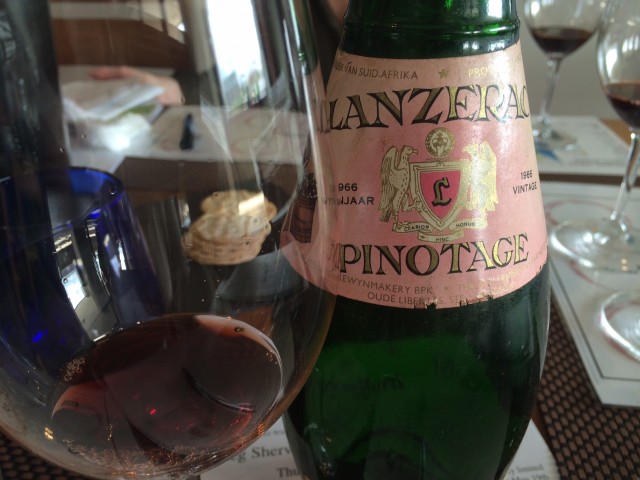 The Pinotage tutorial rounded off with this historic specimen: a 1966 Lanzerac Pinotage in a bottle shape reminiscent of Provençal rose. 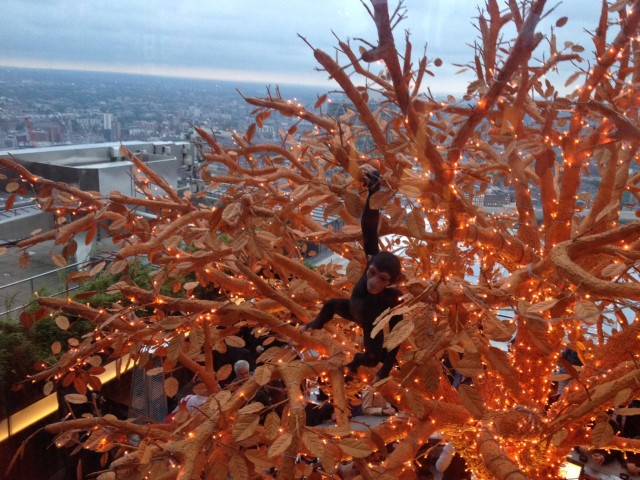 Team db jumped at the chance to sample some cocktails and sushi 39 floors high above London at the Heron Tower’s Sushi Samba on Thursday. A personal favourite was the Smoked Plum Negroni, a recent addition to its cocktail menu, mixed by bartender, Rich Woods. 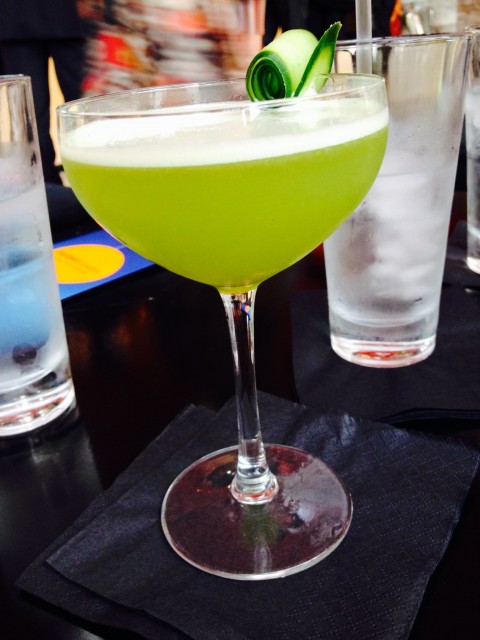 In addition to the Smoked Plum Negroni, another favourite at Sushisamba was the Chucumber, which blends Hendrick’s gin, Japanese plum wine and Maraschino liqueur with freshly pressed cucumber water. lime, sugar and plum bitters. 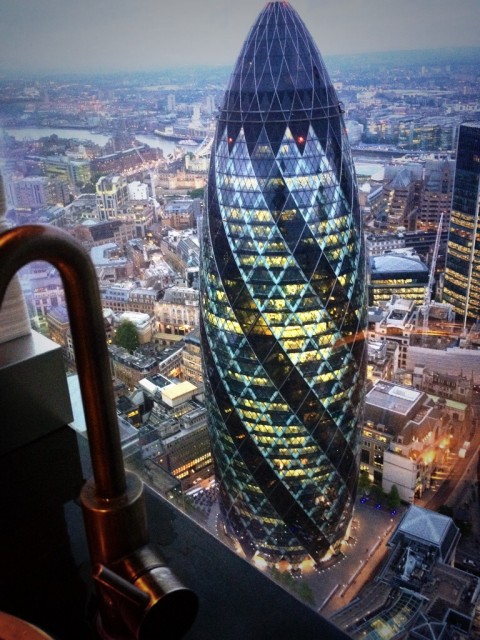 A loo with a view – the rest rooms at Sushisamba boast jaw-droppingly beautiful views of the Big Smoke from a height. 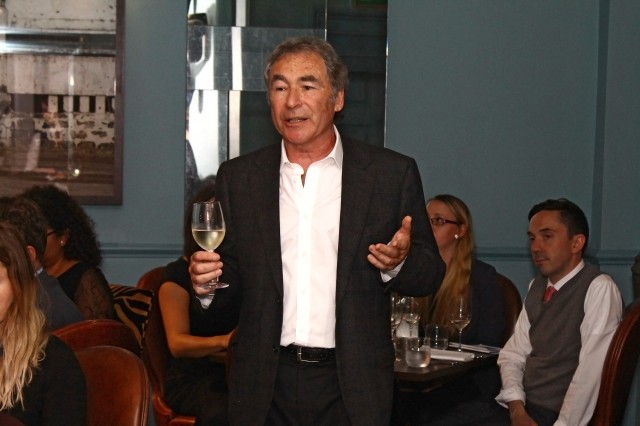 English entrepreneur Richard Balfour-Lynn, owner of Hush Heath estate in Kent, hosted a dinner at his latest venture, The Hide at the Bull in Liverpool Street, to celebrate English Wine Week. 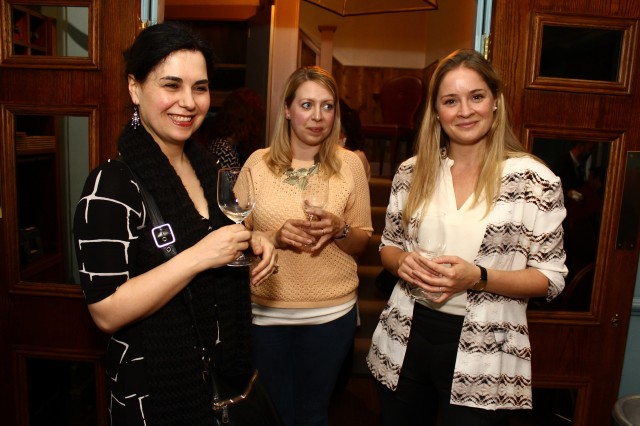 Guests at the dinner, including wine writer Anne Krebiehl (far left), pictured here with Hush Heath’s sales and marketing manager Hilary Green, were treated to a tasting of the Hush Heath range, including its flagship Balfour Brut Rosé, Skye’s Chardonnay and Jake’s Cider. 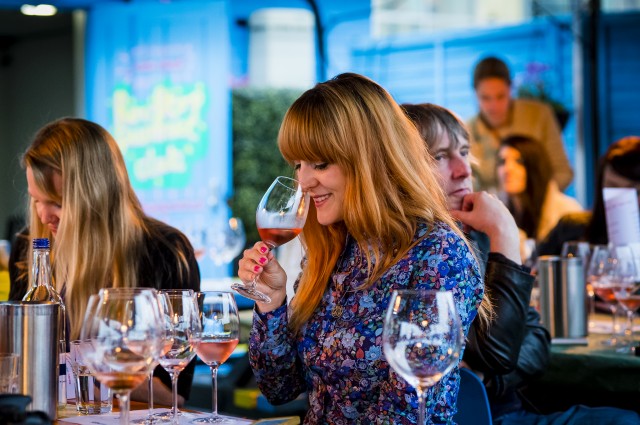 db also headed east this week, to the Queen of Hoxton, for a tasting of Rosé d’Anjou organised by Loire Valley Wines and Sopexa. 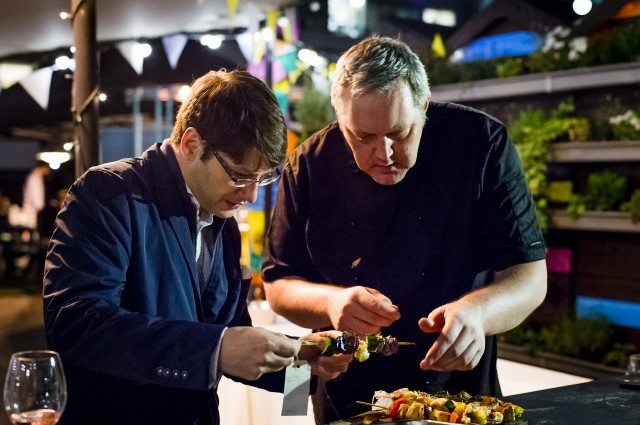 Hosted by wine writer Douglas Blyde, in addition to the rosé tasting, guests had to compete in a competition to craft the best kebab, with kangaroo included in the meats on offer. The winning team, Pink Bandits, used the more modest ingredients of scallops, salmon and prawns to seal their victory.

UK Prime Minister David Cameron visited to Molson Coor’s Burton Brewery on Thursday following its announcement that it is to invest a further £25m in its brewing technology and infrastructure, bringing its total investment to a record £75m – one of the biggest single capital investments in British brewing in decades. 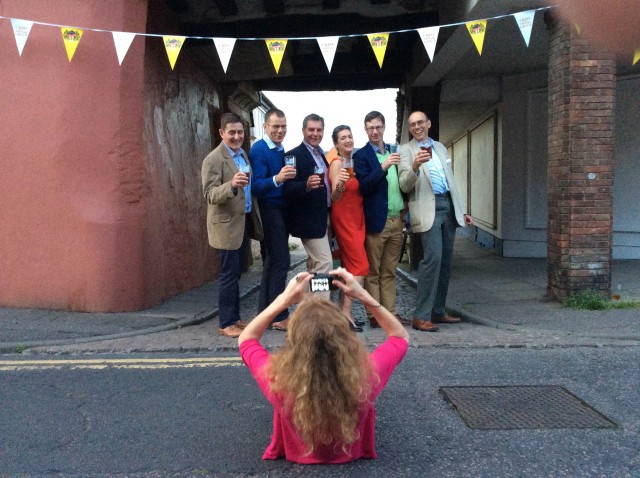 This startling image of a women seemingly emerging from the ground was taken at the City Ale launch in Norwich which saw more than 245 locally brewed beers served in 45 pubs over the course of the 10-day event. Visitors to the city were also able to enjoy barbecues, pub quizzes, beer and food matching sessions, tutored tastings and music.

Members of the wine trade emerged victorious on Friday following a charity golf tournament against The Institute of Masters of Wine held in memory of Michael Cox. A dinner held before the inaugural event at Rye Golf Club raised £640 for the drinks trade charity, The Benevolent. The winning team was captained by Dan Jago, while Richard Bampfield MW captained the MW team.

A team from Robinsons Brewery in Stockport is preparing to row across the Welsh Menai Straits to raise funds for the Llanberis Mountain Rescue Team. The Great Strait Raft Run, which is set to take place on 1 June, will see the seven-strong team, captained by business development manager John Hughes, attempt to cross one of the most difficult sailing straits in the world on a makeshift raft. To help Robinsons Brewery reach their target of raising £500 please click here. 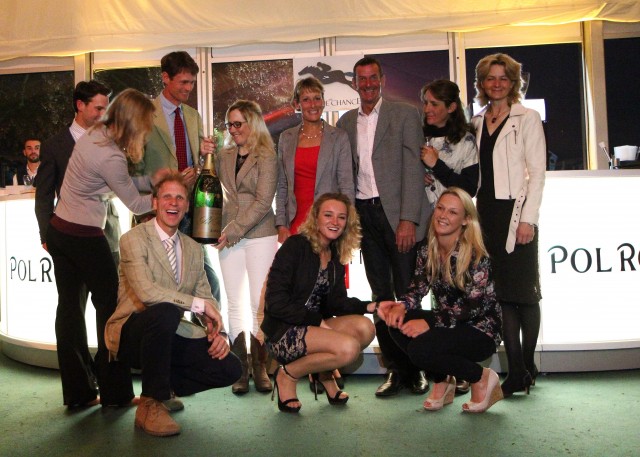 This limited edition Methuselah of Pol Roger Blanc de Blancs 2004 was unveiled at the Riders and Owners party at the Mitsubishi Motors Badminton Horse Trials 2014 by professional event rider, Laura Collett, to mark the launch of its latest cuvée. The bottle is set to be auctioned by Bonhams with the proceeds going to the Nicholls Spinal Injury Foundation – a cause close to Laura’s heart following a horrific fall in 2013 which left her in a coma for a week with multiple injuries.

Alex James from Blur was at the launch of Hardys new online wine shop in the UK on Wednesday, set to showcase Australia’s top end brand’s. Called The 1853 Club, the website is run on a membership basis but is free to join. Customers who sign up will be the first to hear about new allocations, with the chance to buy wines from the upper end of Hardys’ portfolio, either by the case or bottle. 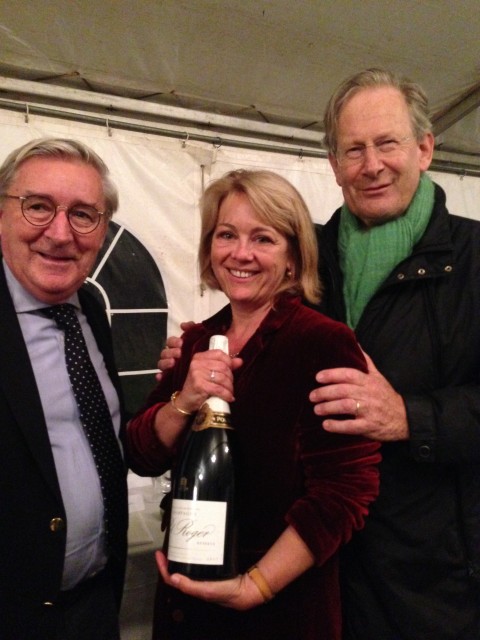 An evening of Bach and bubbles was enjoyed by guests to Music in Country Churches in Northleach this week, hosted by Patrice Noyelle of Pol Roger and conducted by Sir John Eliot Gardiner. Founded in 1989, Music in Country Churches was set up with the support of the Prince of Wales with the aim of bringing world-class musicians to country churches across three annual weekends to raise funds to help maintain churches. 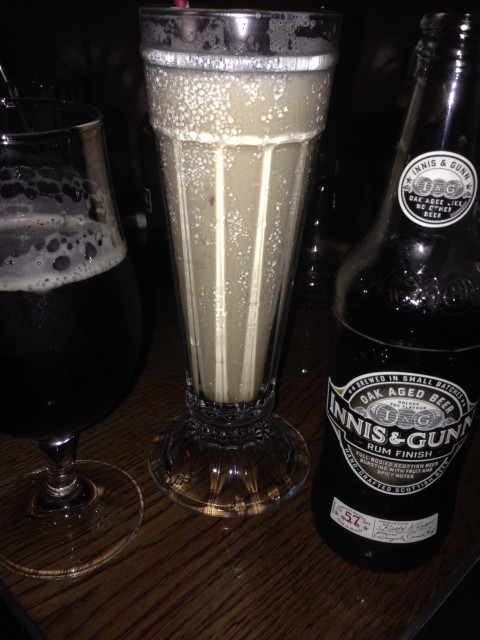 Scottish Brewer Innis & Gunn’s hosted a dinner at Gordon Ramsay’s Bread Street Kitchen near St Paul’s on Tuesday with guests given the chance to sample the brewer’s core range and its latest addition – the Innis & Gunn Toasted Oak IPA. 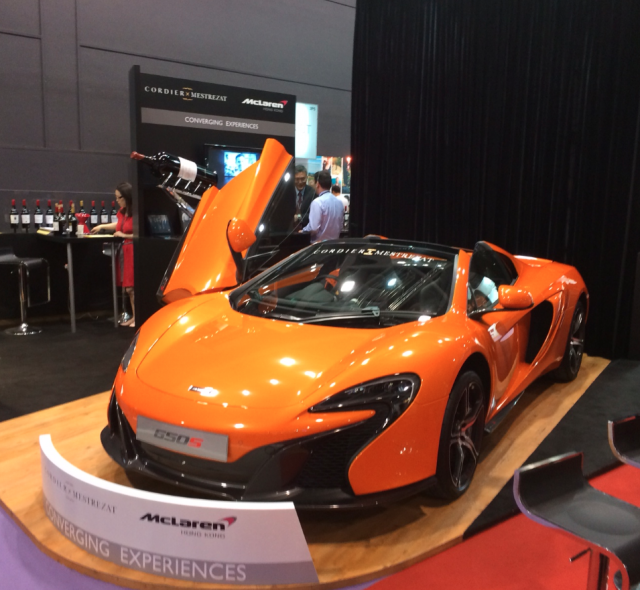 This McLaren 650S was snapped by db this week at Vinexpo Asia-Pacific on the stand of Bordeaux négociant Cordier Mestrezat. Only in Hong Kong would one find a 200mph, £200,000 supercar sitting among cru classé Bordeaux – the Asian city has more supercars per capita than anywhere else in the world.

Sam Neill owner of Two Paddocks came to London to give the circle of wine writers a tasting of his single vineyard wines alongside Nigel Greening of Felton Road with his block 5.

Sam Neill and Nigel Greening at the circle of wine writers tasting.

Stephanie de Bouard de Laforest launches the special gold embossed bottles of the 2012 Angelus at the Connaught in London this Friday.